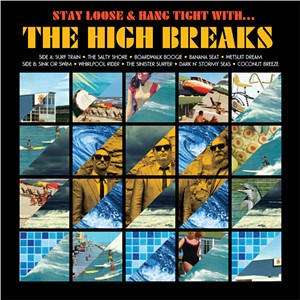 Stay Loose & Hang Tight With ... the High Breaks begins with an invitation: "Let's all climb aboard ... the surf train!" implores guitarist Matt Hagen, the High Breaks' delightfully skewed creative mastermind, just as his trio drops in on a tight, classic curl of reverb-drenched surf-noir called "Surf Train." Woozy, wet and weird, the song is the embodiment of the sound the landlocked Vermont surf band has been building toward for the past five years. It's ultracool and vintage sounding, crafted in obvious deference to the King of the Surf Guitar, Dick Dale. But the opening track also evokes other key aesthetic influences: the smoky absurdism of filmmaker David Lynch; the strange, empty grandeur of Ennio Morricone's spaghetti western soundtracks; and the eerie creep of the Marketts. It's a perfect intro to a nearly perfect record.

Since forming as a side project of late Burlington pop band Lendway, the High Breaks have trimmed from a quartet to a trio — founding member Michael Clifford is now based in California, where he's incidentally much closer to the ocean than his old bandmates in the Queen City. Fortunately, the High Breaks have never relied on a big sound — their brand of surf is more nuanced and delicate. So, in a certain sense, a leaner ensemble is advantageous. But it does place more of a creative burden on the remaining three members.

As the lead guitarist, Hagen necessarily does most of the heavy lifting in that regard. And he's up to the task. His fluid lines have never rung cleaner or with such precision, apparent especially in his nimble melodic runs on cuts such as the gloomy "The Salty Shore," the chugging "Banana Seat" and Side B opener "Sink or Swim."

Hagen sets a lofty bar, but he reaches it in large part thanks to the subtle skill of his longtime bandmates. Bassist Kevin Lynam unleashes a snarling riptide of low end beneath Hagen's splashy licks. Todd Gevry, long one of Burlington's most underrated drummers, provides not only the snapping backbeat requisite of surf rock, but also an array of flourishes and accents that add fathoms of sonic depth.

While the performances throughout Stay Loose & Hang Tight are by and large impeccable, what truly sets the album apart from the band's previous work is its sense of atmosphere. Throughout, the High Breaks evoke the melancholy air of an old beach town in the waning days of summer. Sure, there are still a few waves and rays to catch. But soon the beach will be empty, the garish boardwalk shops shuttered and summer but a fading memory.