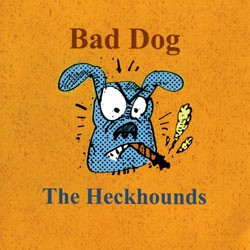 Online music monolith iTunes neatly files Bad Dog, the latest album from Montpelier’s The Heckhounds, under “blues.” And that’s not entirely inappropriate, I guess. But I much prefer the band’s self-applied designation, “hopped-up country-blues.” Simple, sure. But it piques the listener’s curiosity. What’s more, it accurately clues us in to what we can expect to find over the album’s brisk 10 tracks.

The album opens on “Bad Luck and Trouble,” two time-honored blues and country themes. Stylistically leaning more toward the former, the song introduces the trio as a lean, no-frills outfit. Appropriately lo-fi, the song, like the rest of the disc, exudes a refreshingly minimalist aesthetic — especially when compared to the tendency of many modern blues acts to gussy up their sound with highfalutin’ adornments like horns and overly wet guitars. Nothing against that approach, per se, but I prefer my blues steamy and raw. Here, The Heckhounds deliver just that.

There is no virtuoso guitar ripping, overblown harp noodling or vocal howling to be found on Bad Dog. The performances are, by and large, tastefully and — I mean this as a compliment — even lazily restrained. The disc is decidedly rough around the edges, which creates a warm, familiar feel. Slide guitarist Hal Mayforth offers languid, swampy lines, which guitarist and harp player Michael Murdock matches with gruff, understated vocal turns. Meanwhile, drummer Kevin Morrison keeps the time with hazy torpidity.

If the album has a failing, it’s that the songwriting occasionally borders on cliché. Granted, blues — even the hopped-up country variety — is not exactly known for lyrical innovation. But tunes such as “Black Cadillac” and “Bad Reputation” tread too close to genre contrivance for comfort.

However, such moments are the exception, not the rule. Mayforth and Murdoch often prove to be sly tunesmiths, particularly on “Nobody Knows,” “Lucky Little Girl” and the surprisingly touching “I Bought My Baby a Wig.”

The Heckhounds likely won’t blow you away with otherworldly chops. But with Bad Dog, they offer a humble, satisfying take on blues and country that should keep local toes a-tapping in area barrooms just the same.

Catch The Heckhounds at the Bee’s Knees in Morrisville this Friday, October 23.