The Hardscrabble Hounds, The River and the Rain 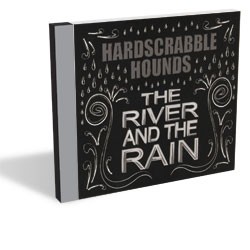 Making a consistently solid album might be one of the most daunting and underappreciated challenges in music. It’s even trickier when a band has more than one songwriter and/or lead vocalist, as disparate writing and vocal styles can either complement or cloud a band’s vision. In short, striking a balance is sometimes a tall order.

Such is the case with Burlington-based acoustic roots outfit the Hardscrabble Hounds and their debut album, The River and the Rain. Centered on the two-pronged songwriting attack of Brian Gatch and Nick Galante, the album is an appealing but uneven collection of songs. At moments it thrills with renegade roots energy, but wilts meekly in others.

The Hounds burst out of the gate with the Gatch-penned barnstormer “Jamaica Bound.” Bristling with ragged, locomotive force, the song feels like a cross between the early work of Austin, Texas, roots band the Gourds and any number of outlaw country badasses. Gatch sneers and snarls with a rock-tumbler-in-the-throat delivery that adds a rusty edge to his musings on wanderlust. Fiddler Patrick Ross colors the track with pure tones that twist mournfully around Galante’s nimble mandolin runs.

That rebel feel continues through the next cut, “Hound Dog Eyes,” also written by Gatch. The guitarist writes with the weary sensitivity of a classic blue-collar bard. His lyrics are plainspoken and gruff, but artful.

In contrast, Galante generally favors a blunt approach and insistent delivery. The duo share songwriting and lead-vocal duties on the Cajun-tinged “Tower Down.” Here, Gatch and Galante are well paired, the latter proving a smooth counter to the former’s wily exhortations.

Unfortunately, that balance tips on the album’s latter half, which, save for two covers, consists solely of Galante’s songs. Following Gatch’s “Long Time Coming” — and a disposable take on Bob Dylan’s “You Ain’t Goin’ Nowhere” — the record drastically changes in both mood and style. On “Pursuing Happiness,” Galante shifts to a jammy, upbeat acoustic groove that stands in stark contrast to the hairy Americana preceding it.

“Angry Wind” retains some heartland heart, replete with wailing harmonica and righteous, 99 percent indignation. But the album goes off the rails on “Never Gonna Let You Go”: It’s a mincing, acoustic pop love song riddled with clichés and mixed metaphors, and features a stilted vocal performance by Galante. That leads to an album-closing cover of Johnny Cash’s “Folsom Prison Blues,” on which Gatch mystifyingly butchers the song’s iconic opening guitar line. It’s a disappointing finale to a record that begins with legitimate promise.

The Hardscrabble Hounds play the Higher Ground Showcase Lounge in South Burlington on Wednesday, August 1, as part of the Northern Exposure series.