The Grey Jay Plans Tribute to 135 Pearl's Beloved Past 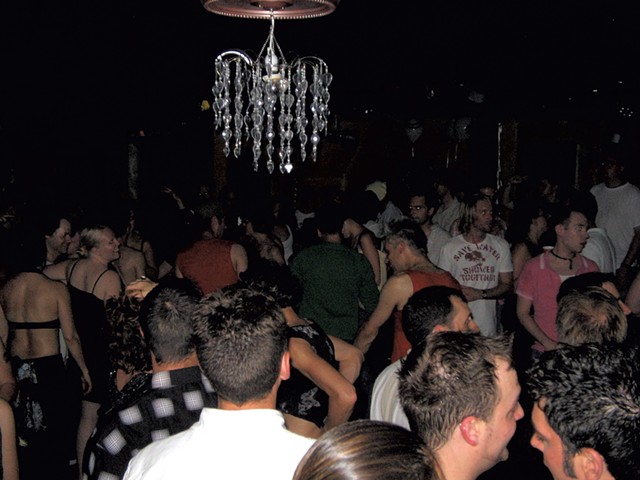 Honey Road's new sister restaurant in Burlington, the Grey Jay, is mid-construction. The dark-wood floors are down, mosaic lamps sourced from Turkey are hung, and local artists are painting the bathrooms. The only remaining sign of the building's past as a Papa John's is one dark-green tile square on the kitchen wall.

Co-owners Allison Gibson and Cara Chigazola Tobin aim to open the Grey Jay in late summer at 135 Pearl Street in Burlington. And when they do, the brunch spot will memorialize another of the building's former lives — one much more locally beloved than the national pizza chain.

Before it was a Papa John's (and most recently Lion Turtle Tea), 135 Pearl was a nightclub and performance space — and Burlington's only LGBTQ+ bar. It opened in 1983 as Pearl's, a restaurant and gay bar owned by Nancy Barnett, Jim Moyer, Ed Packen and Barbara Volz. In 1995, Robert Toms bought the business and renamed it 135 Pearl.

Toms updated the bar's mission statement to welcome "people of every race, gender and orientation" to a place "free from discrimination, segregation and separatism." The queer-friendly club hosted drag shows, local theater, theme nights, karaoke, burlesque, bingo and epic post-Pride parties. On June 3, 2006, it closed its doors for good.

"As we've been renovating this space, we've been blown away by everybody telling us what an important place Pearl's was," Chigazola Tobin told Seven Days. "We want to give Pearl's a tribute and a little bit of a home here still."

The Grey Jay team hopes to turn the restaurant's roughly 30-square-foot front foyer into a collection of photos and memories from its 22-year run as Pearl's and 135 Pearl.

"We want people to send us photos, event posters, stories, snippets, goodbye letters — anything they feel they want to share about their experience with Pearl's or how it was important to them," Chigazola Tobin said. Submissions can be anonymous or signed and don't need to be originals — copies are welcome.

The collected memorabilia will plaster the foyer's walls and ceiling and be visible through the glass front door, which will serve as the restaurant's exit.

"[The Grey Jay] isn't going to be Pearl's by any means, but we want it to bring back that positive energy and be a place that's super inclusive and welcomes everybody," Chigazola Tobin said.

And, over plates of tahini French toast, shakshouka, pistachio sticky buns and harissa Bloody Marys, the Grey Jay plans to host another tribute to Pearl's: the occasional drag brunch.

The Grey Jay is collecting items for the display through August 1. Email submissions to info@greyjayvt.com or mail copies to 135 Pearl St., Burlington, VT 05401 (attn: Grey Jay). Learn more at greyjayvt.com.

The original print version of this article was headlined "Gathering Pearl's"