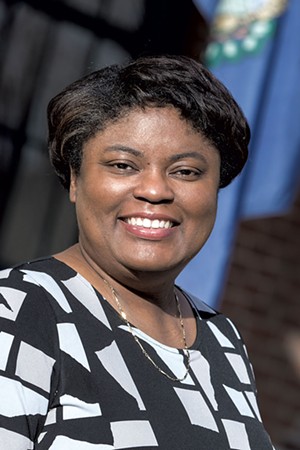 The worker shortage is tough on businesses, but it's a boon to people whose legal problems have made it difficult for them to find work.

"If you want a job, and you are under Department of Corrections supervision in this community, you can find a job," said Leona Watt, a senior officer for the DOC's Probation and Parole office in Springfield. "I believe everyone deserves a chance, and I think that's what is happening. More people are being given an opportunity to progress with their lives."

Working Fields is one of many entities that help connect people who served time in prison with work opportunities. Before the pandemic, companies didn't approach the organization.

Now, "we have plenty of employers coming to us," said Mickey Wiles, who started the South Burlington employment agency in 2017. Working Fields has four offices in Vermont and opened a fifth in Manchester, N.H., in October.

Vermont has long had a workforce shortage. That has intensified during the pandemic, when thousands of people — particularly those in the service industry — retired or decided to step away from their jobs. As part of what has been dubbed nationally "the Great Resignation," workers left to train for other positions, turned hobbies into businesses or found other ways to leave their jobs behind.

The need for workers is so acute that some restaurants, stores and post offices have had to limit their hours. Hourly pay has risen sharply, and many businesses are offering bonuses to people who stay on the job for a number of months or recruit friends.

"More people are being given an opportunity to progress with their lives." Leona Watt tweet this

In this environment, Working Fields has had no trouble placing its associates in jobs all around Chittenden County, Wiles said. The agency provides an array of services, including recovery coaching and rides to work.

It's a new era, said Wiles, a former Ben & Jerry's CFO who spent two years in jail after pleading guilty in 2005 to a federal charge of wire fraud for embezzling more than $300,000 from the company.

Before the pandemic, he said, he was accustomed to hearing from people who couldn't even get a job interview because of past crimes.

"Or if they get in the door and a background check is done on them, the discussion discontinues," Wiles said. "In some cases, they may have even started the job, and the background check comes back and they are terminated."

Federal law prohibits federal employers and those that contract with the government from asking about conviction history until a conditional offer of employment has been made. And most states, including Vermont, have passed "ban the box" legislation. Such laws bar questions about convictions and arrests from job applications and delay background checks in the hiring process. Vermont's ban-the-box law went into effect in 2017.

Such measures affect a lot of people. About 70 million people nationwide, nearly one in three adults, have an arrest or conviction record, according to the National Employment Law Project. Bias against those with convictions disproportionately affects people of color, the project says, because of systemic racial bias in the criminal justice system.

Vermont has thousands more job openings than it does jobless people, according to the state Department of Labor, which recently estimated that 7 percent of all the jobs in the state are unfilled. People with criminal records can make a difference. On any given day, there are about 1,300 people in DOC custody, more than 90 percent of them men, according to the department.

A sizable number of people in Vermont have had some sort of experience with the department. In fact, 4,500 people are currently under "community supervision," most through probation and parole, two programs that allow people who have been convicted of crimes to live outside of prison under agreed-upon conditions. Many are required to get a job.

Will Hunter runs a large housing program, Community Restoration Corps in Springfield, for people emerging from prison or struggling with addiction or mental illness. As a result of the workforce shortage, he said, many of his tenants have been able to leave jobs they didn't like for better ones. Okemo, the largest employer in neighboring Ludlow, often hires his tenants, he said.

"There's one guy who has been in and out of the system all his life and has multiple felonies, and he's working there, and they will give him a bonus if he can bring some other people on," said Hunter, a former lawyer and state senator who was disbarred in the 1990s after pleading guilty to mail fraud.

Hunter knows this worker well and said he has mental health problems.

"When he has gotten angry in the past, he has beaten people up; when he has wanted to steal drugs from a drug dealer, he has beaten up the drug dealer," Hunter said. "But he loves working there, and he's not a ticking time bomb as far as working at the ski area goes." A spokesperson for Vail, which owns Okemo, did not respond to requests for interviews on the topic. As Seven Days reported last month, ski resorts have had difficulty hiring this year as they prepare for what is expected to be a busy season.

Some employers hesitate to hire a person who has been convicted of a crime because they're afraid of how it might affect their workers or company culture, said Michele Asch, the VP of leadership and organizational development at Twincraft, a skin-care products manufacturer. The Winooski-based company doesn't ask job applicants about their criminal history and does not conduct criminal background checks. Twincraft employs some workers with criminal histories.

"People that have made mistakes and paid the price for their mistakes are often really excited for a second chance and excited not to be in that situation anymore," she said.

That doesn't mean it always works out.

"We have 300 employees and have been in business for 50 years, and we're a manufacturer," Asch said. "If you can imagine it, it has happened."

The big impediment for many people in getting a job now, said Hunter and others, is drug testing.

"If the employers want to do drug tests, a lot of people don't apply," he said. "I don't know whether they care about pot, but I think they care about crack and heroin and fentanyl, and there are just an awful lot of working-age people in Springfield who would test positive for those things."

Watt, of the DOC, said about 80 percent of the people she sees through her position are ready to work. The rest need counseling, instruction and other help — sometimes lots of it — to fit in at the workplace and stay on the job. Companies such as Dunkin' and McDonald's have always been willing to hire people who have been in DOC supervision, Watt said. She also commonly places people in landscaping, construction and highway flagging positions, as well as with a nearby slaughterhouse, Vermont Packinghouse.

"And then we have new places that have opened up recently to taking those under supervision," Watt said.

She said it helps to find employers who are patient and who understand that some people need to learn to show up for work on time and stay all day. Sometimes it takes a while for workers to get used to that reality, she said.

"It's about having a team who supports those who are working," Watt said. "People's lives are not simple."

Former inmates may have basic problems with transportation and housing. Some need to attend substance abuse classes during the day.

Watt hopes the newfound acceptance shows employers that people who have served time in jail are not somehow different.

"Let's be honest: They are desperate for employees, so they're opening up to what they will allow," Watt said. "And I think they're realizing, 'This is just like my son or my nephew.'"

Correction, December 19, 2021: Working Fields is not a nonprofit. A previous version of this story contained an error.

The original print version of this article was headlined "Second Chances"