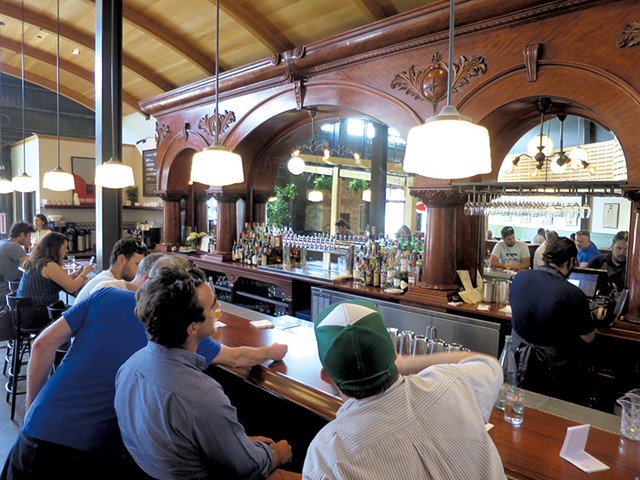 Like many stories, this one begins at a bar. That's where Michael Kuk was hanging out when he got his first job with a group of up-and-coming Burlington restaurateurs.

It was about a dozen years ago, and Kuk was drinking a beer with a friend at American Flatbread Burlington Hearth. Kuk's pal said to the bartender: "You should hire my friend Michael. He does the best work around here."

Soon, Kuk was finishing the installation of the auger system at Flatbread's in-house Zero Gravity Craft Brewery. He was paid in pizza and beer — the cheese and herb and the brown ale, Kuk specifies.

This work led to other restaurant interior jobs for Kuk, 54, a design/build craftsman who lives in Middlesex. He connected with the Farmhouse Group, which owns four local restaurants, and started to work on projects for them. Kuk built the bar at the Farmhouse Tap & Grill and restored the century-old backbar that now occupies a wall in the basement parlor. That bar piece originated in a Winooski taproom. Kuk crafted a bar composed of four types of wood at El Cortijo in downtown Burlington — the structure is especially beautiful when it supports a blood-orange margarita and side of guacamole. He helped design and build the Guild Tavern in South Burlington, a project in which he was guided by a key word from co-owner Jed Davis: industrial.

"I think Michael creates the sense of place in a restaurant," said Davis, president of the Farmhouse Group. "He helps deliver the identity of the restaurant, which is everything."

Kuk's latest project was at the Great Northern, which opened last month on Pine Street in Burlington next door to Zero Gravity's second location. Kuk worked on the design with Matt Wilson — co-owner of the restaurant and the very bartender who served Kuk years ago at the Flatbread bar.

A team of builders and fabricators worked to remake the space that previously housed South End Kitchen. The restaurant has a clean, contemporary feel: high, industrial-style ceilings, a concrete bar by the open kitchen and a herringbone-patterned wood-and-metal structure suspended above a lounge area. The Great Northern design/build project was defined and shaped by two features in the room: a stone fireplace that was already in place and a vintage backbar, which was the focus of Kuk's work.

"Michael really took the bar under his wing and gave it the TLC it needed to be brought back to life," said Great Northern co-owner Paul Sayler.

Kuk restored a 19th-century backbar that came from a historic Seattle barroom, J&M Café and Cardroom. He built the mahogany bar, where patrons sit, that faces the historic piece, as well as the Douglas fir ceiling above it. (Kuk worked with helpers for various aspects of the project.)

"It's quite a journey this bar has had," Kuk said one recent afternoon at Great Northern. "I think it's one of the grandest bars in Burlington, and I think its history is phenomenal."

The backbar, which looks like mahogany, is actually made of flame birch, Kuk said. The piece maintains its original veneer — the flame pattern that Kuk revived in the restoration. The structure is composed of three arches that frame a set of mirrors, hand-carved adornments and columns that rise from a countertop.

The piece dates from 1889 — the year a June 6 fire destroyed 25 blocks of central Seattle. When the city rebuilt the district, a three-story brick hotel and bar rose in Pioneer Square. The J&M was named for its original owners, Jamieson and McFarland. It served Seattle for 120 years until it went bankrupt.

In 2009, J&M closed and its contents were sold at auction. The backbar wound up in the hands of Wilson, who bought it, along with his American Flatbread partners, from a bank for $15,000. The idea was to install the backbar in a new American Flatbread restaurant planned for Portland, Ore. But the restaurant deal fell through, leaving the Burlington businessmen with a beautiful old backbar and no place to put it.

When Kuk first laid eyes on the piece last fall, it was covered in blankets in a Winooski warehouse. Parts were missing, the mirrors were broken and the hide glue had given way. He assessed the parts and figured out how to make structural repairs. Kuk then set up a woodshop in the back of Zero Gravity and did much of the work there.

"I thought it was a remarkable piece of woodwork that was going to be really interesting to figure out [and] to bring back to life," Kuk said. "They don't build stuff like that anymore."

Kuk is a mostly self-taught carpenter who has worked in design/build for 30 years. He grew up in upstate New York and Brandon, graduating from Mill River Union High School. He earned a degree in studio art from Saint Michael's College and worked for a few years with a builder in Brandon.

In 1986, he built a house for himself in Whiting — the first of six houses Kuk has constructed — and then went into business on his own. He recently finished the second house he has made for himself, the Middlesex home where he lives with his girlfriend and their 3-year-old daughter.

When dining out at any restaurant, the couple likes to sit at the bar, Kuk said. It's one reason he's drawn to this renovation specialty.

"One of the great things about working here [at Great Northern] is that Frank often brought out some wonderful food," Kuk said, referring to chef/co-owner Frank Pace. "And his food is delicious."

Pace was working in the kitchen that was in place from the previous restaurant, testing recipes and catering.

For Kuk, the Great Northern bar project was equal parts problem-solving, fine carpentry, elbow grease and historic preservation. He bought a set of dental tools so he could use the sharp, fine points for cleaning out grime and dirt trapped in the bar's carvings. He spent about six weeks on his knees, bent over the bar, rubbing it with soft steel wool and polishing it with Kramer's restorative oil and special waxes. He made a steam box in order to shape and bend strips of wood to craft new frames for the arches.

Kuk became fascinated by the structure he was working on, so he researched period bars generally and the Seattle barroom specifically. He discovered that famed deputy sheriff and gambler Wyatt Earp had played cards at J&M and that actor John Wayne shot a scene from the 1974 film McQ there. Famous Seattle rock musicians Jimi Hendrix and Kurt Cobain played music in the storied barroom.

"I like the history that's in this particular bar, the past history and the present history of us putting it together," Kuk said. "And I love the way that the ceiling makes this juxtaposition of the old and new."

He was talking about the curved ceiling he constructed for the space above the bar, an aesthetic feature he thinks "brings it all together." The blond-wood ceiling arches above the darker vintage backbar. Extending just past the mahogany counter's edge, the ceiling frames and integrates this section of the restaurant from on high, creating a whole from composite parts.

Kuk's attention to detail and his commitment to historic integrity can be found in the crown molding topping the backbar's structure. He discovered a collection of coins and bottle caps in the top of the piece when he was scraping out "100 years' worth of dirt." Kuk saved the items and returned them to the molding when he reassembled the backbar. He imagined people sitting at the bar in Seattle, flipping their bottle caps, the metal tops bouncing off the wall and landing in the backbar's top. Only the carpenter would know that the objects were back where they belonged — a little wizardry from the man who likes to drink a Witchcraft cocktail at the Great Northern bar. Kuk kept one item for himself: a nickel from 1962 — the year he was born.

"One of the beauties of on-site design/build is: It's kind of like an art project," Kuk said. "You know when it works and when it doesn't."

On February 21, with builders and contractors at the Great Northern site, the restored backbar was lifted and set in place. Chris Kiper, who built other features in the room, said the moment reminded him of a barn raising.

"In terms of the restoration quality and the attention to detail, Michael went the extra mile," Kiper said. "It was fun watching him work — to see how he problem-solved."

One aspect of the construction project happened without Kuk's knowledge. The restaurant affixed a brass plaque to the side of the backbar to commemorate his son, who died in February at age 28. The plaque reads: "This bar stands in memory of Bailey H. Kuk."

The original print version of this article was headlined "Design Dedication"