The Grass Is Greener, Farewell, Hello 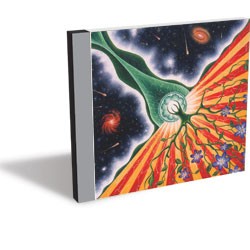 Scottt Mangan — yep, three t’s — is a relative newcomer to the Burlington scene, having moved to the Queen City about a year ago from Philadelphia. His debut album, Farewell, Hello, originally released around the same time — hence the title — and under the pseudonym The Grass Is Greener, introduces an unusual and provocative talent to the idyllic shores of Lake Champlain. The record reveals Mangan as a precocious songwriter with a distinctive experimental bent, tempered by an affinity for conventional pop constructs. His songs are almost always interesting, and earn points for their degree of difficulty, even if he doesn’t always hit his mark.

The album opens on “Today Is Tomorrow,” which in its own curious way is a fitting microcosm of the odd fare found throughout. The song begins with a desperate late-night voice message from an unnamed woman over a loping country bass line. Dawn breaks with Mangan casually strumming acoustic chords. He sings with yawning, slackerly zeal, “You wake into your morning with your mind cobwebbed and hazy / Bloodshot eyes and a mouth as dry as the Mojave. / You rise, but you ain’t shining.” Later, and backed by a listing chorus of backing singers, he wonders, “Can these days get any longer?” Picture Mellow Gold-era Beck, backed by an alternate-reality version of The Beach Boys, riffing over Waylon Jennings’ “Good Ol’ Boys,” and you’re in the ballpark. Confused yet? You should be.

“Eastbound 40,” possibly the record’s finest track, is next. It combines Mangan’s sunny pop inclinations with the devious subtlety of a true musical tinkerer. Odd vocal percussion and other assorted random sounds flicker like fireflies amid the midnight blackness of Mangan’s cruising groove.

Other songs fail to strike the same precarious balance of intrigue and listenability. “For Jessica” is a ballad so maudlin it would make Bono blush. “Ghosts” is an interesting experiment in beats and found sounds, but loses luster on repeat listens.

“Ode to the 9th Ward” is bravely ambitious. Save for an electric bass line, the hip-hop number — yep, hip-hop — is entirely a cappella. The effect is jarring, especially as Mangan’s flow is shuffling and awkward. Though given the phalanx of goofy vocal beats behind him, one wonders if this is intentional.

When Mangan’s reckless approach works, it really works, as on “BetterWorld.” The songwriter is at his best when he allows eccentric ornamental accents to augment or provide atmosphere for his imaginative songwriting, rather than overtly dominating the soundscape. Here, as on ethereal album closer “The Torch,” he does just that. These results suggest that, somewhere in the scattered recesses of Mangan’s artistic mind, a real visionary lurks. If he ever learns to harness and, more importantly, focus his gifts, he’ll be a truly unique songwriting talent. Here’s betting it’ll be worth your time to see if he does.

Scottt Mangan plays this Friday, May 14, at Radio Bean.