'The Good Liar' Doesn't Do Justice to Its Stellar Central Pairing 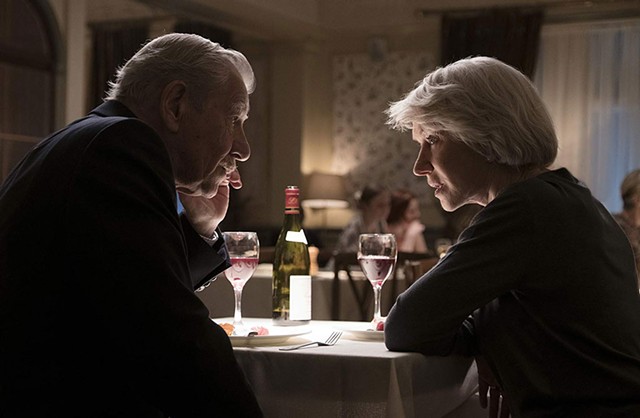 You don't cast Helen Mirren as a patsy. Call it stereotyping, but the actor who has played so many queens and the like has a regal alertness that makes her hard to buy as an unsuspecting victim. For that reason alone, viewers will quickly guess that The Good Liar is a story with cards up its sleeve. Unfortunately, director Bill Condon (Mr. Holmes, Beauty and the Beast) and writer Jeffrey Hatcher (adapting Nicholas Searle's novel) take too long to reveal those cards. And when they finally emerge, they seem to be cards that belong to a whole different game.

Mirren and Ian McKellen play Betty and Roy, two dignified London retirees who meet online and hit it off. On their first date, they bond by confessing the white lies they told each other electronically, but there's plenty Betty still doesn't know about Roy. The viewer soon learns he's a career con man with a fondness for parting gullible investors and sentimental widows from their money.

Faking a physical infirmity, Roy moves into Betty's home, enduring her tasteful beige luxury so he can make her his latest mark. Only Betty's protective grandson (Russell Tovey) sees anything amiss. But is Betty — who taught history at the University of Oxford — really as clueless as she seems?

Impressive as the actors are, the pair's courtship — or is it a friendship? — is a little generic and dull, because the characters are. We witness Roy's extracurricular criminal escapades, which sometimes get violent, yet we don't get much of a read on him beyond selfishness and duplicity. There are none of those little everyday moments that turn an on-page conceit into a real person. What does Roy enjoy in life, besides money? We don't find out.

Naturally, the filmmakers have plot-related reasons for keeping their main characters nearly opaque. Portentous hints are dropped. After Roy and Betty catch a showing of Inglourious Basterds (which places the film in 2009 and, yes, that matters), she objects to its fictionalization of World War II. For his part, Roy declares himself someone who embraces the present and considers the past so over.

Anyone who expresses this sentiment in a movie invariably has a dark past that will catch up with them in the third act, so we have a general sense of what's coming. Yet our lack of intimacy with the characters keeps us from feeling much in the way of tension or dread as Roy's con progresses and Betty drops hints that she may not be as malleable as he hoped.

Without spoiling the final plot developments, I can say they're the kind that force the action to stop short for lengthy expository flashbacks. Condon gives those flashbacks a handheld-camera energy that the rest of the movie lacks. But they feel like a different film entirely, not to mention an attempt to give The Good Liar a seriousness and topical significance it hasn't earned.

The movie's advertising emphasizes the Mirren/McKellen matchup, and anyone who comes primarily to see two acting giants play off each other won't be disappointed on that score. But this middling psychological thriller doesn't give its characters enough in the way of psychology to get our pulses racing. Despite a belated attempt to fire us up, it's as beige as the suburban décor that Roy decries.