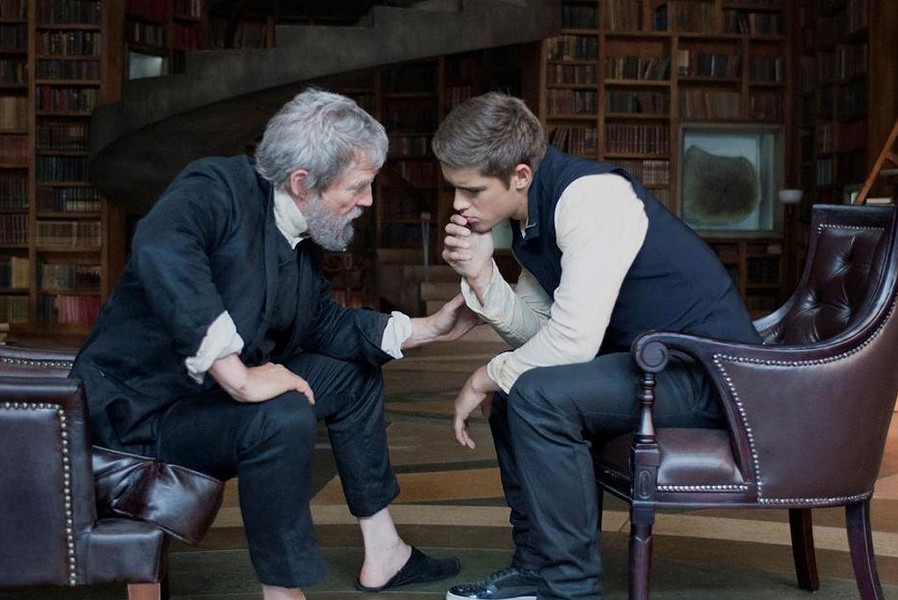 Good dystopian fables make people uncomfortable. They inspire troubled reflections on the world we live in (Would I watch a televised fight to the death?), not complacency. They're not fantasies about misguided adults who devise a ridiculous social system to repress the impulses of attractive teenagers; they're veiled stories about the darkness in all of us.

Judging by its 1994 Newbery Medal, its solid place on middle school reading lists and the testimony of its now-grown readers, Lois Lowry's The Giver is a powerful dystopian vision. Its movie adaptation, however, panders shamelessly to young viewers and current trends with a story that is guaranteed to cause discomfort in no one except fans of narrative logic.

The story's protagonist, Jonas, has been aged from 12 to 16 so he can be played by the hunky, painfully inexpressive Brenton Thwaites. In voiceover, Jonas explains that he lives in a Community where conflicts no longer occur and perfect equality — i.e., monotone sameness — has been achieved by means of daily drugging and oversight from Elders led by an imposing Meryl Streep. Lying and unruly emotions are verboten. Friends and relatives address each other like instruction manuals: "You've fallen! Are you in need of immediate assistance?"

In short, as any kid will immediately see, this is the most boring of all possible worlds — and, in case we didn't grasp the point, everything's black and white.

Director Phillip Noyce (Salt, Rabbit- Proof Fence) makes good use of this visual starkness when Jonas is sent to apprentice under the Receiver (Jeff Bridges), a hermit whom the Community has designated to safeguard its memories of the bad old days. The tormented wise man's cabin overlooks the cloudy abyss that Jonas knows only as Elsewhere, and this vista frames striking tableaux of the Receiver guiding the boy toward an understanding of the ugly truth.

Transmitted psychically between them, the Community's repressed memories are bland Technicolor scenes that could be clips from today's Travel Channel, with some war footage thrown in for balance. Jonas immediately realizes (who wouldn't?) that the old days were much cooler than the new days. Soon he's seeing his own world in color and trying to kiss his friend Fiona (Odeya Rush), who reacts like an android to his amorous overtures.

When she starts seeing what Jonas sees, the intriguing conversations between Jonas and the Receiver yield to an all-too-familiar adolescent rebellion scenario. Ironically, it's the older actors playing brainwashed characters (including Alexander Skarsgård and Katie Holmes) who manage to evoke real, nuanced people, however fleetingly, while the younger actors mostly just furrow their brows in a desperate impersonation of messy humanity. Bridges is a special case: His performance is so bizarrely mannered, it's not clear whether he's impersonating the latter-day Brando or Obi-Wan Kenobi.

Whatever he's doing, it doesn't convey the pathos of a man tasked with remembering what everyone else chooses to forget. As the film struggles to its far-too-convenient conclusion (which diverges from the book's), viewers may wonder why the Community didn't just scrub its human hard drives long ago, given that one whiff of the Receiver's forbidden knowledge is enough to turn the whole society topsy-turvy.

It's a truth universally acknowledged: Attractive teens who know it's possible to kiss other attractive teens will avail themselves of the opportunity. The movie depicts their free choice to hook up as a noble proof of human potential. The Giver only briefly elaborates on the more disquieting themes of the novel, such as the ease with which we compartmentalize, dehumanize and forget what doesn't suit our worldview. It allows us to leave feeling smug because we believe in love, colors, beauty and physical and mental stimulation — in other words, all the stuff movies always encourage us to believe in.