Sampling alpaca from an Ascutney farm 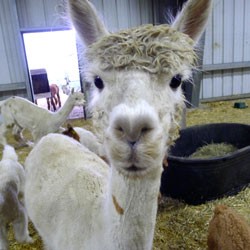 On their black-marble-topped kitchen island, Jennifer and Ian Lutz set out a jar of mustard, a bottle of ketchup, some late-season lettuce and slices of tomato, and a plate of freshly grilled burgers that glisten as they ooze juice onto the plate. At first glance, these look like beef patties. Yet the meat’s faintly reddish hue betrays another origin: These are pure alpaca burgers, ground from animals raised here on the Cas-Cad-Nac Farm on the southern slopes of Mount Ascutney.

We’ve just spent part of the rainy afternoon with the Lutzes’ 250-strong herd of huacaya alpaca, the fluffy, mellow cousins of camels that are ubiquitous in the Andes, but not as common a sight in the Northern Hemisphere.

In the last decade, though, alpaca have made inroads into American agriculture as low-impact, low-stress animals whose silky fiber can fetch impressive prices during their 15- to 20-year life span. While breeding males and females can cost upward of $10,000 each, those animals that can’t — or won’t — be bred are a big question mark for alpaca farmers. As the Lutzes see it, extra alpaca are the “logical by-products of any serious and responsible breeding program,” they write on their website.

Some of those animals get sent to fiber farms, while others are purchased as pets. During the economic slump of the past few years, though, that number declined. “When the economy was good, people were taking better care of them,” Jennifer Lutz says. “As the economy went down, finding homes wasn’t as easy.” That’s where the meat comes in.

With the granular texture of grass-fed meat, the first bite is milder than beef but ever-so-slightly gamy, as if both rabbit and wild turkey were in the blend. As I polish off the burger, I ask Jennifer Lutz if it was difficult to slaughter and eat the animals that she and her family had come to know intimately, sometimes over a decade or more.

“We don’t take it lightly, but we feel it’s our moral obligation,” she says without hesitation. In her business, up to 10 percent of mature animals are not bred, and she’d rather give them a dignified end than have them wind up on a farm where “they might starve.” Plus, in the Andes, most alpaca land on a plate by the age of 6. (There, domesticated alpacas are not only valued for their fiber, they are a prime source of low-fat, healthy protein and a staple of the Peruvian diet.)

Despite their conviction, the Lutzes, who began selling alpaca meat just a few months ago, are still tentative about how to market and sell it. Eating alpaca is still somewhat taboo in an industry where the animals are known primarily as a “huggable investment,” according to Ian Lutz.

Indeed, it’s easy to be charmed by these animals. The alpaca that roam the hilly pasture on the farm — trotting through the fields, twirling pieces of straw in their mouths, clucking and humming — are endearing: both clumsy and elegant, with long necks extending from wooly bodies. Their hairdos can resemble spiked mullets or Afros, and their elongated faces make them look as if they’re pursing their lips or trying to crack a tight smile.

Jennifer Lutz became acquainted with alpaca, the smaller cousins of llamas, while studying abroad in Ecuador in the early 1990s. When she returned to her native Vermont — she’s from East Barnard — she jokingly suggested to her then-boyfriend, Ian, “Hey, let’s get an alpaca for the backyard.”

Trouble was, they didn’t have a backyard at the time, and Jennifer was working as a civil engineer. She and Ian attended a sheep and wool festival in Killington in 1994, and over the next few years, they learned about the low-impact ways of alpaca: They eat less than cows and have soft pads on their feet that don’t tear up pastures; a split in their lips enables them to shear off grass rather than pull it up in clumps. Alpaca rarely make more noise than a low hum, when they’re content, or a rattle — called an orgle — when they’re mating. They’re very social and hate to be alone. And they are reliably profitable.

There are two types of alpaca: suri, which have long, spindly fur; and huacaya, which have a denser, woolier coat. In 1997, when the Lutzes bought a farm at the end of Wheeler Camp Road in Perkinsville, they purchased five huacaya alpaca from Earlah Swift, the cofounder of Mariah Alpacas, whom Jennifer calls the “grand dame of the alpaca.” At the time, the alpaca industry was close to nonexistent in the States, but the Lutzes were off and running.

At first, they spun their own fiber into yarn and sold both at farmers markets. Over the next few years, as their herd grew into the hundreds, they gained a reputation for having award-winning animals. Alpaca owners from across the country began bringing in their females for breeding.

Lutz calls alpaca fornication “a communal act.” Earlier in the day, we watched one stag leisurely impregnate a relaxed-looking female as other willing does lounged against the pair, waiting their turn. Females tend to have only one offspring, called a cria, per 11-month pregnancy. The babies are openly inquisitive, and sometimes even mischievous once they’re comfortable. (As I took notes in their pen, a chocolate-brown 2-week-old doe continually tried to pry open one of my pockets with her mouth.)

It wasn’t until about three years ago that the Lutzes, who live here with their two teenage sons, decided to slaughter and eat a pair of nonbreeding females. “The meat was really good,” says Ian Lutz, who was as surprised as the rest of his family.

The couple eventually found a processor for their animals and began selling the meat — which is inspected by the Vermont Agency of Agriculture — from the farm. Now they have two freezers full of tenderloin, strip-loin medallions, top-round steaks, ribs, sausage and ground meat. Because of that meat taboo in the alpaca industry, though, the Lutzes have been reluctant to advertise this new sector of their business. They have only just begun to sell meat off the farm, at one site: Singleton’s General Store in Proctorsville, where the massive central freezer is a veritable jungle of exotic meats, from alligator to elk to ostrich to, now, alpaca.

Cooking alpaca has been a learning process, Jennifer Lutz says. Early on, she marinated some tenderloins in teriyaki sauce “way too long,” not realizing that the lean meat is a sponge for marinade. The first time she made sausage, it was too dry; now the couple’s northern Vermont food processor adds fat to their sweet and hot Italian sausage with that signature reddish alpaca hue and a robust flavor.

“There’s definitely an education gap we have to fill,” Jennifer Lutz says. “But we’re optimistic.”

I took home alpaca ribs from Cas-Cad-Nac, thinking a long, slow braise might tenderize them. I tried it two ways: a simple three-hour braise with red wine, thyme and savory vegetables; and another with cider, sage, fennel and lots of butter. The meat took to the cider braise much better — the process rendered it almost rabbit-like and delicate. But when eating alpaca ribs, be prepared for tougher meat than you’re used to — sort of akin to goat.