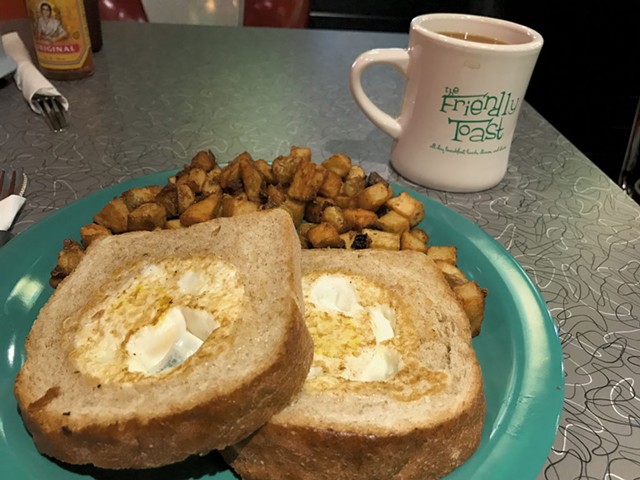 The Friendly Toast, equipped with retro furnishings and a friendly staff, opened Monday morning at 86 St. Paul Street in Burlington. At the site of the former Bluebird Tavern, it's the fifth branch of a New England chain that launched 18 years ago.

"We picked out special items that we thought might tie into this community," said general manager Corey Lombardi. "It's a little bit edgier [than other locations]."

For lunch and dinner, the restaurant offers soups such as vegetarian chili and tomato-and-feta bisque, and salads such as one with grilled salmon, goat cheese, pecans and strawberries. Main courses include a selection of tacos and an array of mac and cheese, with options ranging from vegan (made with cashew "cheese" and veggies) to lobster.

"The idea behind the menu is that it's totally inclusive," Lombardi said. "Everybody can find something."

The inclusive approach extends to the bar, which offers $15 flights of the four house Bloody Marys and mimosas.

The Friendly Toast had a soft opening over the weekend for invited guests. Proceeds from the bar — about $4,000 — will be split between the Boys & Girls Club of Burlington and the Community Health Centers of Burlington, Lombardi said.

"The culture of Friendly Toast is what really attracted me," Lombardi noted. "They really encourage the staff to come as they are."

The Friendly Toast is open daily, starting at 10 a.m. this week and 8 a.m. from next week on.