The Foundation of Western Civ? A Midd Exhibit Illustrates the Debate 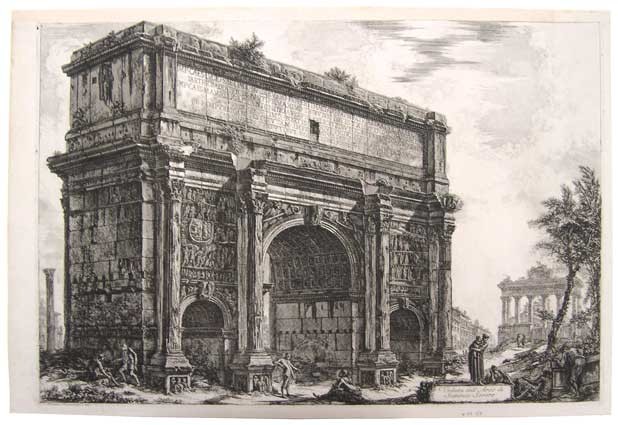 The “Greece vs. Rome” show at Middlebury College may not be packing ’em in like the Picasso/Matisse smackdown did at New York’s Museum of Modern Art a few years ago, but it does qualify as more than an exercise in academic esoterica.

This small exhibit is the product of a first-year seminar on the same topic taught by Pieter Broucke, a Middlebury art history professor. His students drafted the wall texts and selected the materials for the show, which examines the 18th-century debate over whether Greece or Rome should be regarded as “the true fountainhead” of Western civilization.

Among the 30 or so pieces on display at the college’s art museum are selections from Middlebury’s newly restored set of The Antiquities of Athens. This four-volume collection of prints by two British scholars ranks, in Broucke’s view, as “arguably the single most influential publication within Western architecture.”

The Brits’ precise depictions of ancient Greek monuments also serve as the show’s main visual evidence for the “Greece rules” side of the debate. The prints were themselves inspired by the writings of German cultural historian Johann Joachim Winckelmann (1717-68), who had challenged the long-prevailing view of Rome as the source of Western civ.

Winckelmann, whom Broucke describes as “an excellent researcher and very good writer,” made such a convincing case for Greece’s aesthetic superiority over copycat Rome that this became — and remains — the standard interpretation. And, not incidentally, it determined the look of Vermont’s most famous building. The Statehouse in Montpelier is one of many examples of Greek Revival architecture in the United States inspired by Winckelmann’s work and The Antiquities of Athens.

Rome’s defenders didn’t surrender to the revisionists’ offensive, however. Venetian architect and artist Giovanni Battista Piranesi (1720-78) launched a furious counterattack, mainly in the form of two collections of prints, one of which was entitled “On the Magnificence and Architecture of the Romans.” Piranesi’s dramatic views of ancient Roman ruins, composed in dark tones reminiscent of Rembrandt’s style, are far more visually compelling than anything presented on the pro-Greece side of the show. One knockout example is a 10-foot-tall, highly detailed rendering of the Column of Marcus Aurelius. Its sheer size conveys Piranesi’s argument in favor of the grandeur that was Rome.

But Piranesi, an eccentric visionary nicknamed “Crazy P” by Broucke’s students, didn’t help his own cause by insulting Greece’s champions in a series of polemical pamphlets. His excesses, in fact, helped Winckelmann’s side win the debate 250 years ago.

A coda to the Middlebury show notes, however, that it was Piranesi who ultimately prevailed by breaking out of the confines of the Greece vs. Rome debate. Late in his life, he came to the revolutionary conclusion that artists shouldn’t imitate any historical models and should create works in accordance with their own imaginations.

A final piece in the show suggests what an extraordinary imagination Piranesi himself possessed. It’s from a series of 16 prints collectively known as “Imaginary Prisons.” They look like something Escher might have etched if he had just finished reading Kafka. In the print included in “Greece vs. Rome,” the viewer looks through a monumental archway toward another pair of arches that dwarf the hunched, scuttling figures in the middle distance. It’s a powerfully disturbing image that steals the entire show.