The Flood, Straight and True 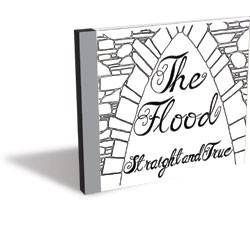 Such was the first thought that ran through this reviewer’s head upon reading the introductory letter and hefty packet accompanying Straight and True, the debut full-length from Warren-based band the Flood. “I sent you a lyric sheet,” writes songwriter Patrick Brownson, explaining said hefty packet with great understatement. He adds, “comprehension of which is crucial to full enjoyment of the music.” Uh-oh.

There are a few problems with this approach. One, if enjoyment of anything — music, food, movies, sex, whatever — comes saddled with preconditions, you’re already in the hole. Don’t ever tell your audience how they should like you. Trust them to figure it out. Two, if you’re going to draw attention to one specific aspect of your art as “crucial,” it had damned well better be “exceptional.” And three, if comprehension of your lyrics is paramount, why doesn’t the CD come with them? Is it only “crucial” for critics? What about regular folks who just want to enjoy your damn music?

All of which brings us back to Straight and True. So, is it any good? Actually, yes. In moments it exhibits true potential. Is Brownson the next great rock ’n’ roll poet? Of course not. And it would be unfair to expect that — had he not practically invited that expectation.

The album opens on “Caedmon’s Dream.” It’s a suspicious start. The band mines generic rock templates but fails to elevate them above amateurish mimicry. Brownson sings with a thin timbre recalling that of Al Yankovic — or maybe the dude from Nerf Herder. (Note: That’s not an insult. Weird Al’s a friggin’ genius. And, in moments, Brownson really does sound like him.)

It gets better. The title track is a gem — if you can ignore the lyrics. The song laments the passing of the world’s great lyric poets and paints Brownson as some sort of messianic, word-slinging Robin Hood, stealing stanzas from the rich (artificial pop stars, presumably) and giving them back to the poor (pretentious, would-be poets ... also presumably). Despite this folly, Brownson crafts a melodically engaging tune. It’s catchy and pleasant, much like something from the Decemberists — albeit complete with Colin Meloy’s pomposity.

“The Whole World’s Gone” is as radio ready a single as you’ll find. What begins as a fragile, Bright Eyes-esque ballad quickly explodes into Third Eye Blind-ian pop bombast. This is one of the best tunes on the disc. “Passionate Man” is another well-crafted entry, both in instrumental arrangement and clever wordplay. In both instances, Brownson loses the overwrought pseudo-intellectualism and keeps his lines efficient and light. He is at his best when doesn’t overthink, as on the buoyant “Sweet Janeen,” the rollicking “Bonfire Smoke” and cruising album closer “Candlelight.” All show unique potential. Brownson and the Flood would do well to keep that in mind for future endeavors. And to put those lyrics in the liner notes.