In the European and American Gallery of the Fleming Museum of Art, a white sheet of typing paper is affixed to the wall in place of an 18th-century painting by Thomas Hudson. It seems a paltry and surely temporary replacement for the 5-by-4-foot oil on canvas — perhaps the gallery version of a "Back in 5 minutes" note. In fact, the two-paragraph statement on the paper is highly charged. It begins: "This space used to include a portrait of Anne Isted (1684-1783), who was an enslaver."

The text goes on to explain how the exploitative Isted family gained its wealth. But that first sentence alone speaks to the sea change currently taking place at the University of Vermont's 90-year-old museum.

Written by curator Andrea Rosen, the statement observes that this gallery "is full of celebratory depictions of white Europeans and Euro-Americans whose wealth and status were built on the backs of people of color." In short, such paintings "reinforce white supremacy," and that is precisely what the museum aims to identify, examine and extinguish within its walls.

"The Fleming Reimagined" is not the title of a single exhibition but rather a rubric for several thoughtful presentations of works from the permanent collection; repurposed spaces for public engagement; and a newly created, strongly worded values statement called "A Living Document of the Museum's Reckonings and Transformations."

Museum staff are also courting public opinion from both the campus and broader communities — including through robust appeals in this newspaper. Their intention is to "follow through on feedback with honest, reflective answers about past failures and ways we are committing ourselves to listening to the audiences we serve," the living document reads in part. Rosen said the staff plans to hold meetings every couple weeks to consider this input and the museum's responses.

Collectively these efforts represent a dramatic do-over in the Fleming's criteria for exhibitions, acquisitions and teaching.

"To have these conversations and self-examinations, and to do it all publicly and transparently, is educational for all of us," said museum director Janie Cohen. "It's really uncomfortable at first and then, at a certain point, it's not uncomfortable anymore."

To some observers, the museum's transition might seem like too much too fast. But, as Rosen observed wryly in a phone interview, "There've been too many years of not doing anything!"

Numerous museums worldwide had begun to reevaluate their cultural biases before the police killing of George Floyd in May 2020. But that tragedy and the ensuing Black Lives Matter protests accelerated the Fleming's dive into self-reflection, assistant director Chris Dissinger acknowledged during a museum tour.

The staff quickly assembled an exhibition for fall 2020 aptly titled "Reckonings." Museum employees and student interns not only pulled germane pieces from the collection but also wrote labels that explained why the artworks spoke to "the moment." Those works can still be seen in a slideshow on the Fleming's website.

That was just the beginning of a more collaborative approach at the museum. During the pandemic-induced closure, staff had the luxury of time off from what Rosen called "the churning wheel of planning exhibits." In the new process, every member of the team has had a place at the table. As curatorial leader since 2015, Rosen admitted that it took some getting used to.

"It's definitely a change for me in my role," she said. "I'm a bit more of a coordinator rather than the decision maker. But sharing power is essential to change."

That belief is now writ large on a gallery wall: "To truly collaborate is to cede singular authority, which few of us do willingly. What creative possibilities exist in making those power struggles and negotiations visible in art?"

In addition to thoughtful prompts and values-driven statements sprinkled throughout the Fleming, visitors will find a wide range of artworks and interactive opportunities.

The exhibition/deinstallation in the second-floor European and American Gallery is called "Absence: Seeing and Unseeing the Fleming's Collection." In addition to the painting of Anne Isted, the unseeing extends to a number of other removed artworks "that have been on view for decades and whose subject matter or backgrounds is hurtful to members of our community," reads an information panel. While those pieces of paper speak volumes, they might also inspire a viewer to pay closer attention to the works that remain.

That last image adorns the front of the Fall 2021 Museum Map. The print, made by two artists taking turns on its design, "represents how important collaboration is," Dissinger said. "For me, this illustrates the element of trust."

A portion of the East Gallery, currently dubbed Learning Studio, is filled with worktables used by faculty and students when examining items from the collection. According to Dissinger, visitors are welcome to listen in on their classes. 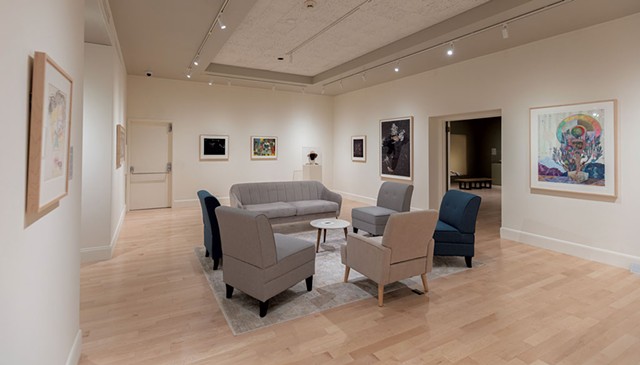 Across the Marble Court, the smaller Wolcott Gallery now offers the Storytelling Salon: A cluster of comfortable chairs in the center of the room is available for scheduled group discussions or for anyone to plop down and contemplate the art on the walls. Again, these pieces come from the permanent collection; some were included in last year's "Reckonings" show. Each of them inspires story-making.

Finally, "Abstracts," a selection of nonrepresentational contemporary paintings installed in the balcony, should not be missed. The pieces "make room for imagination," according to a museum description, and "allow us to reconsider outdated traditions and start to envision what comes next."

Dissinger and Rosen both noted that people have asked what the museum will do with artworks now deemed offensive. For the time being, they'll go into storage with the bulk of the museum's 25,000 objects. Rosen said some pieces might be pulled out for teaching purposes in the future. Then she mused, "Can a racist work be useful in education?"

The reimagining is a work in progress. For now, Rosen suggested, "Instead of focusing on what's come down, what can we put up?"

Ninety years ago, the Fleming's first director — zoologist Henry F. Perkins — founded the Eugenics Survey of Vermont, notes Cohen in a written introduction to "Absence." This year, the Vermont legislature unanimously voted to issue a formal apology for its role in supporting forced sterilizations of individuals considered inferior. The Fleming staff, too, have extended a collective mea culpa, laid bare personal and institutional reckonings, and embraced a commitment to becoming an anti-racist organization.

"I think this is our most important moment," Dissinger said of the museum. "People are watching what we do and should be."

"The Fleming Reimagined: Confronting Institutional Racism and Historical Oppression" is on view through December 10 at Fleming Museum of Art, University of Vermont, in Burlington.