The Fleming Museum Finds a New Curator at Last 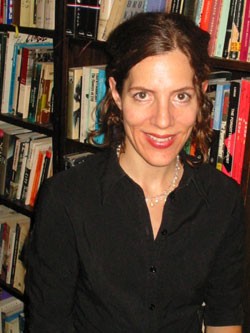 New Fleming Museum curator Aimee Marcereau DeGalan had an auspicious introduction to the Green Mountain state. Flying in for her interview, she was seated next to Patricia Brennan, who works in development at the University of Vermont. President Dan Fogel was on the plane as well. “It was cosmic,” says DeGalan. That’s not why she got the job, but it gave her a taste of things to come.

The Fleming has been curator-less since last September, when the previous job holder, Evelyn Hanks, departed for a position at the Hirschhorn Museum in Washington, D.C. But the wait ended when Director Janie Cohen decided to hire DeGalan, who earned her PhD in art history just last year at Case Western Reserve University in Cleveland. The 37-year-old has “an exceptionally strong art historical and curatorial background with years of experience working with major collections at the Cleveland Museum of Art and the Detroit Institute of Arts,” says Cohen. “Aimee’s area of specialization is 18th-century European painting, while recent experience working with contemporary artists has excited her interest in this area as well.”

Cohen suggests the Fleming will offer plenty of opportunities to delve into both historical and contemporary curating. While the museum often brings in world-class exhibits, its own diverse collections — more than 20,000 objects spanning the history of civilization — provide a lot to play with. DeGalan is “genuinely excited,” she says, to oversee this treasure trove. She was struck by, for example, the work of Vermont artist Hilda Belcher (1881-1963), whom she’d not heard of before. And because of her focus on British painting, DeGalan noted the Fleming’s portraiture of that provenance. “There’s one by Thomas Hudson [1701-1779] not on view that I hope to bring out soon,” she declares.

She’s also thinking small: “A project I’m working on in Cleveland is portrait miniatures — some of them are an inch and a half to 3 inches tall,” DeGalan says. “I was excited to see that the Fleming had some miniatures, including one of George Washington.”

This curator clearly enjoys pulling things out of the closet for a fresh look. At the Detroit Institute of Arts, she says, “I did a show called ‘Beauties in the Basement.’ I went through the works and brought up things that hadn’t been shown for 40 years — many [local gallery-goers] hadn’t seen them since they were children.” Putting the objects in a new context gave viewers a different frame of reference, something DeGalan strives for in an exhibition.

This interest in making fresh connections was evident, too, in her dissertation project. Entitled “Dangerous Beauty: Painted Canvases and Painted Faces in Eighteenth-Century Britain,” DeGalan’s research found a link between the makeup women wore 200 years ago and the paint artists used to depict them. What they had in common was deadly. “Both substances contained lead and mercury,” DeGalan points out. Women knew their “pursuit of beauty” was potentially fatal, she adds, and yet “they continued it with abandon.” Now, there’s a subject with timeless resonance.

DeGalan is a Michigan native, from suburban Detroit — though her name suggests she just arrived from Paris. “On my father’s side, my great-grandfather was French,” she explains. “My mom’s side is French-Canadian, so I got a double whammy.” Despite having relatives in Québec, DeGalan had never been in Vermont before arriving for her interview at the Fleming. Having secured a place to live on Burlington’s Park Street, she says she’s excited to explore the state as well as the museum. And she’s pleased by the scale of both. “At a large institution you can’t move very quickly,” DeGalan notes, “whereas, at the Fleming, they’re very eager to do lots of things and raise their profile. I had been a final candidate at other large institutions, but I thought about it and decided I could have a bigger impact [in Vermont].” Besides, she adds, “I just loved everyone I met up there.”