The Fifth Business, Time of Year 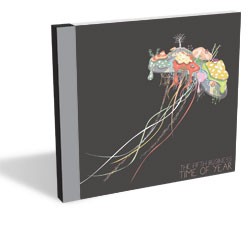 On their 2009 debut, Fiction Pilot, the Fifth Business delivered a solid, if unspectacular, take on tried-and-true indie rock. Together only a few months before releasing that record, the Burlington-based quartet was a new unit still searching for its identity. But in spite of derivative songwriting and sonic textures, FB showed promise — at least ably mimicking indie legends such as Built to Spill and Modest Mouse.

On their sophomore attempt, Time of Year, the Fifth Business grow up and expand their scope. While they still don’t push much beyond the relative safety of indie-rock conventions, there are moments that suggest they are on the verge of doing just that. Certainly they are contenders in Burlington’s blossoming indie scene.

The album leads with the title cut. It’s a curious opener — a humble little acoustic and vocal track that’s devoid of the jangly-guitar bluster that defined the band’s first record. Perhaps for just that reason, the song is uniquely compelling. Vocalist Deane Calcagni delivers searching prose with subdued vulnerability over dissonant, arpeggiated guitar. Just as the song’s final, resolving chord fades, the album begins in earnest with driving rock bombast on “No Cure for Curiosity.” Blistering, clever and catchy, the song is a fine example of the Fifth Business’ potential.

“I Could Be Wrong” is next and continues the hard-edged transformation hinted at in “No Cure,” as does the following cut, “Candy Cigarettes.” Both songs feature aggressive, angular work from lead guitarist Ted Calcagni. But especially on the latter cut, Deane Calcagni reveals a previously unseen songwriting depth. Where his earlier musings were trite and predictable, it seems he’s honed his talents and become more comfortable taking lyrical risks.

Time of Year isn’t perfect. Cuts such as “Split the Difference” and “Funeral” feel uninspired next to the more provocative “Straight Line” and “The Transformation.” Still, this is a tantalizing offering from a local band that seems poised to come into its own.

Time of Year is currently available at iTunes.