The Everything Space Champions 'Embodiment Revolution' 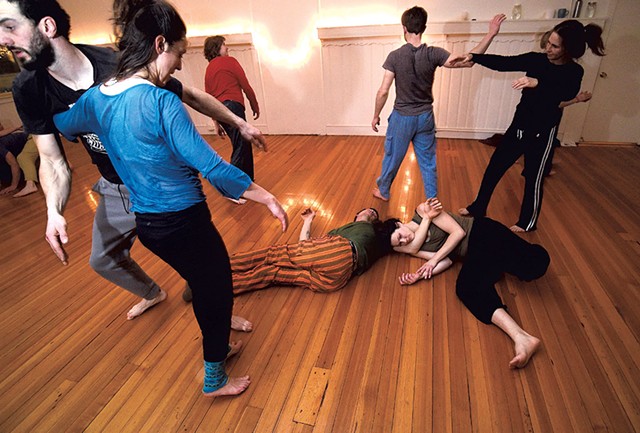 The revolution may or may not be televised — or YouTubed or Facebook Lived or whatever. But if Amanda Franz and Abbi Jaffe have their way, said revolution will most definitely be slow. And probably kind of awkward and touchy-feely. It will also be deeply self-aware and in touch with its own proprioceptive senses. There may be archery.

Franz and Jaffe are the cofounders of the Everything Space, which bills itself as the first studio in Vermont "specifically dedicated to the education of diverse somatic practices as an integral part of social and environmental justice work." Or, to use phrases Jaffe coined, the multiuse Montpelier studio is the epicenter of "embodiment activism" and home to the "embodiment revolution."

To understand those terms, it's first helpful to have a definition of "somatic education," or "somatics." Very simply, it's a field of movement study and therapy based on inner perceptions of the body — in other words, on actively paying attention to all the stuff our bodies are always trying to tell us if we'd just take a moment to listen.

Or, as the late philosopher and somatics pioneer Thomas Hanna put it, somatics is the study of "the human being as experienced by himself from the inside."

At the Everything Space on a recent Tuesday evening, students are experiencing themselves from the inside — or learning to, at least. This is the second session of the seven-week somatic movement class Discover Your Body Intelligence, led by Montpelier's Amy LePage. On a gleaming hardwood floor, eight students — mostly middle-aged women — stand over heavy knit blankets and plush pillows. The open room is warm, clean and well lit, with oversize windows on two sides looking onto Main Street and frigid downtown Montpelier.

At the front of the room, LePage stands beside a model skeleton. She uses it to highlight the parts of the body on which this week's class will concentrate — shoulders and pelvis.

Following a brief icebreaker session, LePage instructs her students to stand in place and roll their heads from side to side. She asks them to pay special attention to muscles in the neck and shoulders that engage and release throughout the movement.

"Notice if one side feels different," she says. "Notice if you're holding your breath differently."

LePage teaches therapeutic yoga and somatics throughout the Montpelier area, independently of the Everything Space, under the banner of Emerge Yoga. Somatics has many variants, but LePage follows Hanna's teachings in her focus on recognizing the habitual and often subconscious ways our bodies store tension — slanted posture, hunched shoulders — so we can release that tension through conscious movement.

"Our habits and patterns eventually become normal, so our baseline changes," LePage explains later. "So this is an opportunity to recalibrate, find our baseline and notice the nuances." The way to do that, she continues, "is to slow way, way down."

During the hourlong class, LePage guides her students through a series of gentle but deliberate movements, most of which happen (very slowly) at floor level. In each case, she reminds her students to take note of the subtle changes in their bodies and how their bodies interact with their surroundings.

"We're usually all over the place, thinking and doing, which means that we're never actually sensing and noticing internally," says LePage. "We are relating human beings; we relate with our environment and other people. So, by having the opportunity to dive inward and pay attention to ourselves, it also impacts how we then experience outwardly."

An increase in internal awareness, she explains, can promote positive external actions. That, in essence, is the foundation of the so-called "embodiment revolution," as well as a founding principle of the Everything Space. 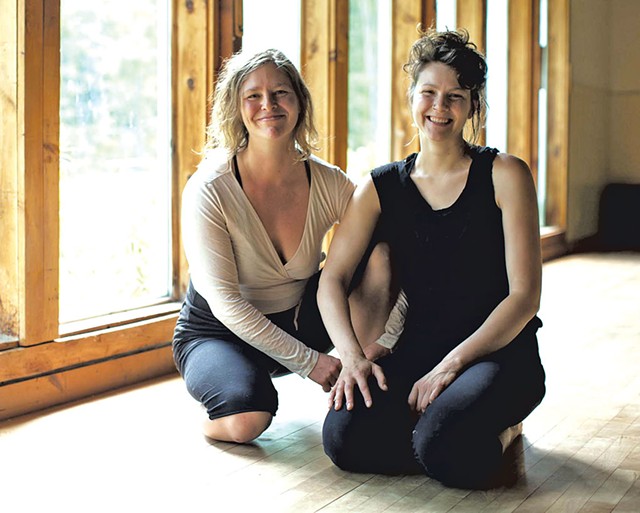 When Franz and Jaffe opened the collaboratively run studio two years ago, it was the culmination of five years of teaching together — often at Dharma Door (now Reciprocity Vermont Embodiment Center) in Underhill, an embodiment retreat center owned by Jaffe. Though Dharma Door was a formative experience for the duo, Franz says it was just one piece of "the larger embodiment puzzle."

"We wanted to open a space that focused on the integration of somatic education and how that is connected to social and environmental justice," says Franz. Such a space would need to be more accessible than a remote retreat — both physically and financially.

"That's why we called it the Everything Space," says Jaffe, who has a background in yoga and Thai massage and has been teaching embodiment classes throughout New England for more than a decade. "We could have called it the Somatic Studio or something. But we wanted anyone to walk in and feel like it could apply to them."

The Everything Space charges for its classes on a sliding scale. They range from LePage's class to weekly contact improvisation jams to the family-oriented CoMotion Dance class to a new session called Robin Hood's Arrow: Piercing the Illusion of Capitalist Culture. That last one is an archery class taught by wilderness guide and hunter safety instructor Murphy Robinson.

Franz and Jaffe are both certified somatic body practitioners working toward somatic educator/therapist certification from the International Somatic Movement Education and Therapy Association. They curate the Everything Space's offerings to align with the concepts of embodiment activism. For example, besides learning to shoot a bow and arrow, Robinson's students will ponder "six concepts of anti-capitalist theory," according to the course description.

Not all classes are so overtly political. Most, in fact, aim arrows at capitalism and patriarchy in subtler ways. "We're saying that the body is important, and let's listen to the signals it's giving us," explains Jaffe. "And in our culture, that's a radical act.

"So the activism is in creating a culture where it's safe to feel our bodies," she continues. "Because when we are connected to ourselves, our bodies and nature, we're going to respond differently when we show up to be an activist or gas station attendant or whatever it is we do."

"How we relate to the world is related to how we hear ourselves," says Franz, who has studied and practiced somatics in the U.S. and Canada for more than 12 years. The embodiment revolution, she continues, is "about how to get people in their bodies and feeling more connected and alive through that process."

As LePage's students file out of the Everything Space at the conclusion of her class, it's hard to say whether they're ready to smash the patriarchy, battle the alt-right or save the planet. But most look relaxed and contented.

"The slowing-down thing is really unusual for me," says Berlin's Kathi Graves, who explains that the class is helping her deal with chronic nerve pain. "I'm noticing things in my body because it's kind of meditative — and I'm not a meditative person."

Clara Bruns is dealing with a "frozen shoulder." The Calais resident credits the "small, gentle movements" practiced in somatics with helping her regain some mobility.

"I have this problem because of habitual tension holding," says Bruns. Somatic movement "helps me relax."

You may or may not see Graves or Bruns on the front lines at the next Statehouse protest. But, according to Jaffe's theory of embodiment activism, the mere act of slowing down and listening to their bodies could have a broader effect on the community.

As LePage puts it: "The more we learn about ourselves, the more it impacts the world and culture around us."

Correction, January 18, 2018: An earlier version of this story misidentified the subjects in the second photo.

The original print version of this article was headlined "Inner Activism"