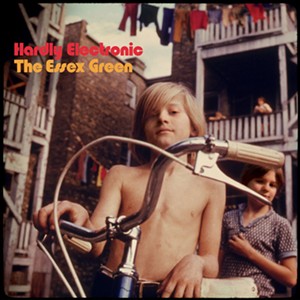 Deep into the Essex Green's new album, vocalist/keyboardist Sasha Bell sings, "And I am a fool to say the years don't matter / We were kids with all the clatter." Though the album title comes from the same track ("Slanted by Six"), the aforementioned line seems to capture the record's theme best. The Essex Green are rooted in nostalgia but invariably turned toward the future.

The Essex Green formed from the ashes of local luminaries Guppyboy. When last we saw them, the Burlington-turned-Brooklyn act had dropped Cannibal Sea, an excellent, engaging ode to whimsical pop. But that was 12 years ago, when the band's sound was riding the crest of a new wave. The Essex Green had joined the famed Elephant 6 Recording Co., a collective that included indie-rock legends Neutral Milk Hotel, the Apples in Stereo and Of Montreal. The Essex Green later signed to Merge Records.

Then, poof, the group was gone — as its Facebook page says, "the Brooklyn pop band who no longer lives in Brooklyn." After a stint in San Francisco, Bell now lives in Missoula, Mont. Guitarists/vocalists Chris Ziter and Jeff Baron live in Burlington. (Disclosure: Baron is deputy circulation manager for Seven Days.)

So, when the band suddenly returned with a new full-length record, one could be forgiven for wondering if the magic might be gone. But here's the beauty of the Essex Green's sound: It's so steeped in the hermetic study of classic pop that trying to assign a specific time period to their music is futile.

Album opener "Sloane Ranger" is a perfect distillation of the band's chameleon-like quality. In the initial garage-rock stomp, Baron's guitar is suitably crunchy, then Ziter and Bell engage in some call-and-response vocals. By the chorus, though, the song is sunshine-drenched pop, complete with syrupy harmonies and trumpet lines.

Few bands in recent memory service a chorus like the Essex Green. On "The 710," they employ all the best accoutrements; handclaps and chiming piano follow along with Bell's timeless vocals. The track also hints at another theme of Hardly Electronic, which is the frustration of life getting in the way of art.

It's clear the band members have reflected upon whatever kept them from making music together for more than a decade — as well as the subsequent victory of reforming. "C'mon, c'mon, there's always a way out," Bell sings.

Standout tracks abound here. "Don't Leave It in Our Hands" sounds like a lost XTC track, albeit more earnest and less snarky. "Waikiki" and "January Says" are pure pop perfection; the band's sound is too articulate and clever to be considered simple emulation. Yes, the Essex Green love vintage pop music, but that's only one facet of a band that sounds as fresh as it did at the start of the 21st century. (On the album, Lowell Thompson contributes bass; Steve Hadeka and Jeremy Frederick share drum duties.)

Though Hardly Electronic is a worthy comeback record, it isn't perfect. The band's eclecticism works against it on occasion. Compared to the magisterial pop of tunes such as "Modern Rain," the Essex Green's attempt at a classic country-style number, "Bye Bye Crow," comes across like a bad television commercial jingle. But this is nitpicking. Over 14 tracks, the Essex Green bask in their return to form, picking up where they left off in 2006 and facing the future with heads held high.

Hardly Electronic is available at theessexgreen.bandcamp.com. The Essex Green play a homecoming show, with locals Paper Castles, this Friday, August 17, at ArtsRiot in Burlington.