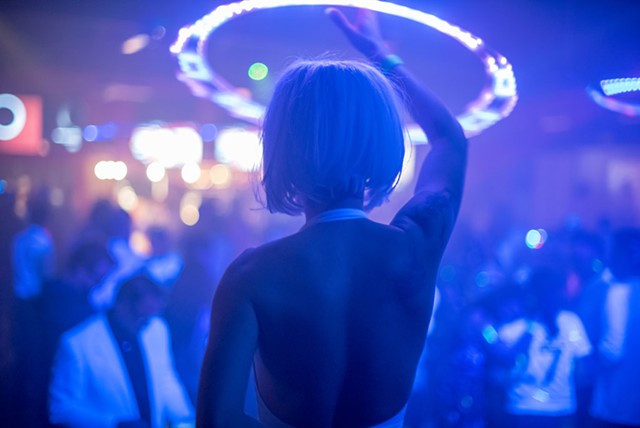 In recent years, White River Junction has enjoyed the fruits of ongoing revitalization. The former industrial hub in the Upper Valley has seen a spate of new businesses, restaurants and cultural enterprises put down roots, while long-existing entities have been reinvigorated. The unincorporated village is home to the Main Street Museum, the Center for Cartoon Studies, theater company Northern Stage and a smattering of boutiques and markets.

But missing from the arts-centric community has been a modern concert venue — until recently. In a space that once housed the Tupelo Music Hall, a nightclub that closed its doors under confusing circumstances in 2012, a new, multifaceted events space called the Engine Room is just taking shape.

Brandon Fox stands behind the Engine Room's glossy, fully stocked bar, which was recently refurbished and extended by several feet. The venue is his family business' most recent acquisition. Fox is a co-owner of the dynastic Maple Street Catering and Big Fatty's BBQ, which were founded by his mother, Bethany Lewis, and stepfather, Clay Vagnini.

Fox explains that the room was in fairly good shape when his company took it over but says, "It definitely needed some love." Most recently, the space had been home to a short-lived sports bar and lounge called Club Diesel.

The commercial and industrial park is also home to a salt grinder, salt-storage shed and rail yard, hence the new venture's mechanically inspired name. In fact, trains and tankers roll into the compound on tracks that practically come flush up against the Freight House, the official name of the long warehouse that is home to both Elixir and the Engine Room. But, with advance notice of train schedules, the rumbling of incoming rail traffic shouldn't interfere with events.

As waning afternoon sunlight pours through the Engine Room's wall-to-wall windows, Fox points out many of the high-ceilinged room's most recent additions and restorations. The bespectacled 39-year-old notes a new, serpentine lighting fixture with a cobalt LED strip hanging above the counter that his mother and sister conceived. He also points out the corrugated metal paneling underneath it.

New professional concert lighting adds a decadent, rock-and-roll vibe to the expansive stage, which could easily support a large combo or even a small-scale theatrical production.

In fact, music and theater, as well as comedy and club nights, are included on a laminated page that lists the Engine Room's initial schedule through May. Upcoming entertainment includes Windsor rockers the Pilgrims, Upper Valley party band the Tricksters, Lebanon, N.H., trio the Conniption Fits, and a multi-night run of JAG Productions' presentation of the biographical Billie Holiday musical Lady Day at Emerson's Bar and Grill.

"There's a lot you can do with it," Fox says of the approximately 2,700-square-foot room. "We're trying to be that middle place from Burlington to Boston."

A projector hangs from the ceiling in the middle of the room, as does a 125-inch pull-down screen just in front of the stage. Fox says family film screenings and date-night movies are a potential offering, though none is currently booked.

In addition to its own happenings, the space is available for public, semi-public and private events, with sliding-scale fees based on a function's needs. A bare-bones or charitable event could cost as little as a few hundred dollars, while larger-scale shindigs could cost thousands, especially if they utilize Maple Street Catering, which will soon be on-site. The kitchen is currently under construction, with several large appliances strewn about.

Seating at the club can be configured in a variety of ways depending on the event. For instance, chair stools and high-top tables make the most sense for standup comedy. But a black curtain next to the stage hides several folding banquet tables and folding chairs for large-scale functions or seated shows.

To show off the brand-new, state-of-the-art sound system, Fox plugs his phone into the sound mixer. Country group Zac Brown Band and R&B spitfire Foxy Brown sound equally full and rich blaring from the club's speakers, with bass tones you can feel in the soles of your feet.

Though the space seems primed to succeed, it's not immune to challenges.

"In this area, staffing is definitely a tough thing," says Fox, noting the difficulty of retaining "good-quality staff that want to work and call it their home."

Another issue with the ever-growing business hub is parking. Some of the businesses offer a handful of spaces alongside their buildings. But, given the Engine Room's nearly 200-head capacity, parking could get tricky.

Fox says he's working on it. He expects another 30 spots to open up in the coming months as improvements are made to the rail yard.

The father of three is a true family man. You can tell how much he cares about his community when you see him in his element. After showing off his new business, he heads back to his restaurant across the parking lot. Fox buoyantly flits about the dining room, checking in with staff, friends and regulars as well as ribbing a newcomer attempting the Big Fatty's Challenge. That's a feat of consumption in which a diner must ingest — and, presumably, hold down — four pounds of food in 60 minutes or less. The prize is a T-shirt.

"It's a place where everybody knows your name," says Fox, likening the convivial vibe to the bar from NBC's long-running sitcom "Cheers."

He's excited for the Engine Room to finally get into the swing of things, but not as excited as his almost-4-year-old daughter, Evelyn. Fox is hosting her upcoming birthday party there.

The original print version of this article was headlined "Totally Stoked"