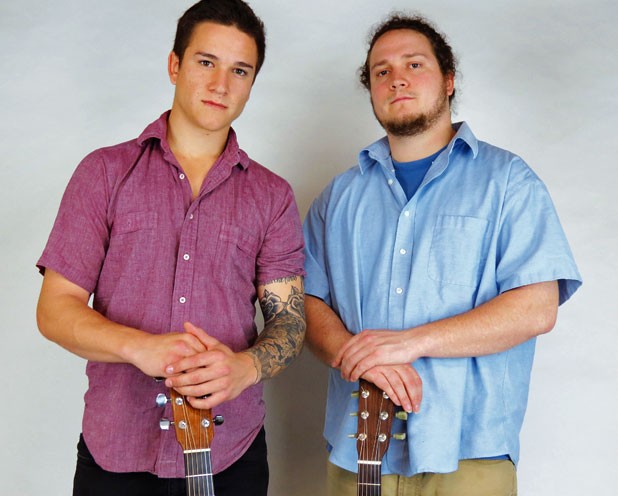 Sam duPont, 22, speaks softly while he traces a fork around the edge of his plate. As bright midday sun filters through the front window of Burlington’s ¡Duino! (Duende), he’s recounting the journey that led him to Vermont, where he has recently reunited with his brother, songwriter Zack duPont, 28. Their band, the DuPont Brothers, will release a self-titled debut EP this Saturday, May 25, at Burlington’s Signal Kitchen.

The younger duPont moved to Burlington recently from Arizona, where he lived for five years following recovery from drug addiction at a rehab clinic. He describes his time there as rigidly structured and isolated, a program in which patients have to earn “luxuries” most take for granted as everyday things — contact with family, accepting visitors, playing a guitar.

“They make you earn everything,” says Sam.

In a reversal of cliché rock-and-roll mythos, music became part of Sam duPont’s path to sobriety, his salvation as he began writing songs to work through his emotions.

“I was about 17 years old, and I had a lot of stuff to deal with and expressed it through songwriting,” he says.

During a visit from Zack, Sam played his new songs for his older brother. It proved to be a turning point that led to the duo’s later collaborations. Sam calls it his “aha moment.”

“I was stunned,” says Zack. “His songs blew me away. They were incredibly moving and creative. They were so powerful.”

Zack duPont helped his brother record those songs for a solo album with a very limited release of about 100 copies. Sam laid down guitar and vocal tracks in Arizona, where he was establishing himself in the Tucson singer-songwriter scene, playing frequently with nationally renowned flat-picking guitarist Peter McLaughlin. Sam sent his files electronically to Burlington, where Zack and his musician friends added parts.

“I don’t really like to talk about that record anymore,” says Sam with a sheepish grin. “It was pretty green.”

“I still love a lot of those songs, though,” says Zack, adding that they continued their cross-country collaborations for years, occasionally playing shows together over holidays in their native Delaware.

When Sam relocated to Burlington in March, the DuPont Brothers tracked their debut live at Egan Media Production in Colchester. Local filmmaker Matt Day of Wondermind Pictures recorded the session for an accompanying DVD release. That five-song EP is a stirring work that melds Sam duPont’s dusty, straightforward style — he says he’s greatly influenced by Southwestern artists such as Calexico — with the elegant complexity that Zack duPont displayed on his previous solo efforts, Paths (2009) and last year’s Somewhere in Between.

Pat Melvin plays bass on the brothers’ EP and has been playing with Zack duPont for several years in various projects.

“Zack writes incredible lyrics,” says Melvin in a recent phone conversation. “And he writes in a very chromatic kind of way, which I enjoy. It’s not just strumming chords. It’s moving all the time … it undulates. There’s no mistaking him for someone else.

“Sam is younger, so he’s a little less refined,” Melvin continues. “But he also writes fantastic music. So you get a wide spectrum, a diversity of styles and feels.”

On “My Friend,” Sam’s gently rolling melody is echoed by Zack’s hollow-bodied guitar. Zack’s “Skipping Stones” is a sinewy, slow burn with a brooding tension embodied in Andrews’ melancholy horn wail. The EP closes on Sam duPont’s “Grow,” an easy, midtempo tune that effortlessly fuses the younger duPont’s earnest pop melody and introspective lyrics with a deceptively sophisticated arrangement. In a way, the song serves as a microcosm of the siblings’ synthesis of seemingly disparate styles.

“I think we’re just lucky,” says Zack duPont, explaining their musical cohesion. “I think we both write in a way that leaves a lot room for collaboration.”

“It helps that we know each other so well as people,” adds Sam duPont, touching on their familial bond. “That allows us to focus on serving the songs. And it makes for a diverse sound.”

It also makes for an abundance of material. The five songs that make up the new EP are part of a larger body of work the duPonts say could fill four albums. And now that they’re no longer separated by thousands of miles, the duo is writing even more together.

“We’ve both been writing a lot,” says Zack duPont. “But now we’re writing for each other, and learning more about each other. And that’s pretty exciting.”

The original print version of this article was headlined "Family Ties."