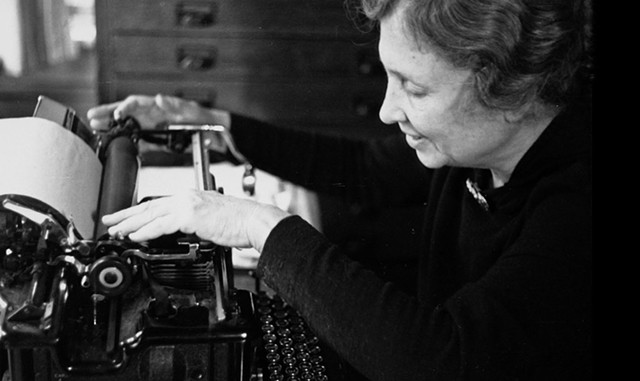 Helen Keller (1880-1968) was one of the most inspirational figures of the 20th century. But most people know the writer and activist for her determination to overcome the barriers facing people with physical disabilities in her lifetime, not for her equally fierce determination to replace American capitalism with a system in which the workers control the means of production.

That's right, Keller was a socialist — eager for revolution, in fact, with firm feminist and anti-racist convictions. Such is the message of the 2020 documentary Her Socialist Smile, currently streaming in the virtual cinemas of the Vermont International Film Foundation (through August 31) and the Savoy Theater (through mid-September). The film's Boston-based director, John Gianvito, teaches in Vermont College of Fine Arts' MFA in Film program.

Deaf and blind from 19 months of age, Keller learned to read, write and speak with the help of tutor Anne Sullivan and became an international celebrity. That's the story everyone knows, chronicled in the perennially popular stage and film drama The Miracle Worker.

Gianvito tells a different story that begins in 1913, when Keller gave her first speech to a large audience. Radicalized by her reading of Karl Marx and H.G. Wells, she spoke out for socialism in that lecture and many that followed. During World War I, she advocated for peace and women's suffrage; later, she joined forces with the Industrial Workers of the World, espousing beliefs that were increasingly vilified as "Bolshevism" in the American media.

This Helen Keller is no inarticulate child fighting her way out of darkness. Rather, she's a master of fiery rhetoric and quotable comebacks.

While poet and activist Carolyn Forché narrates the documentary, she doesn't speak for Keller at length. Instead, Gianvito has made the bold choice to present hefty quotes from his subject as text on a black screen. (We also hear brief recordings of Keller speaking.) During Forché's narration, instead of the expected archival or stock footage, we see resplendent images suggestive of a nature documentary: snowy tree branches, a snail making its slimy way across a rock, a sea of ivy waving in the wind.

These days, most documentarians aim for maximum immediacy, dispensing with a narrator and telling their story through primary sources. This approach runs into trouble, however, when their subject is difficult to capture on film, and they often resort to using expert interviewees to explain things. Personally, I'd always rather read a good write-up than watch a doc full of these talking heads.

Perhaps Gianvito agrees — hence his choice to make large sections of Her Socialist Smile a flat-out reading experience rather than a cinematic one. Instead of hiding the artifice inherent in the documentary form, he foregrounds it. Before Forché starts narrating, we watch her rehearse. The actor voicing W.E.B. Du Bois is introduced as he adjusts his hearing aid in preparation for recording.

Once we've accepted this unusual framework, we start to appreciate the power of Keller's words. Watching text blocks alternate with nature imagery, we might almost be reading them along with the filmmaker and seeing Keller's sensibility filtered through his, as in a literary essay. When Keller's rhetoric becomes more radical, the text turns red; angry punk rock fills the soundtrack.

The absence of talking heads from the film is both a plus and a minus. While it's refreshing not to have to listen to scholars dissect Keller, some of her views could use better contextualizing. One example is her support for the Soviet Union. To account for how such a humanitarian could have spoken in favor of a totalitarian regime, Gianvito deploys an old clip of Noam Chomsky explaining that Lenin and the other Soviet founders weren't true Marxists. It's interesting enough, but would Keller have agreed?

I can't recommend Her Socialist Smile as a riveting film experience because it doesn't aim to be one; it alienates us in ways that feel purposeful. It also makes us think. Where were these radical politics in the biographies of Keller that we read in elementary school? How might our education have been different if we'd been introduced to her not as an exemplar of personal achievement but as a champion of collective empowerment? How might we be different?

Keller herself said it best: "I may be a dreamer, but dreamers are necessary to make facts!"

Helen Keller in Her Story (also known as The Unconquered; 1954; YouTube, rentable): While more documentaries on Keller are in the works — look for Becoming Helen Keller on PBS — this one from her lifetime, featuring footage of 72-year-old Keller visiting president Dwight D. Eisenhower, might be a good starting point.

Profit Motive and the Whispering Wind (2007; Fandor, Mubi): Gianvito's earlier work includes this award-winning "visual meditation on the progressive history of the United States." In 2010, Time Out voted it one of the 50 best documentaries of all time.

Platform (2021; VTIFF Virtual Cinema through August 31): Looking for some modern inspirations? This documentary from Iran follows three sisters as they compete for an international title in the Chinese martial art wushu and reckon with the limitations on female athletes in their homeland.