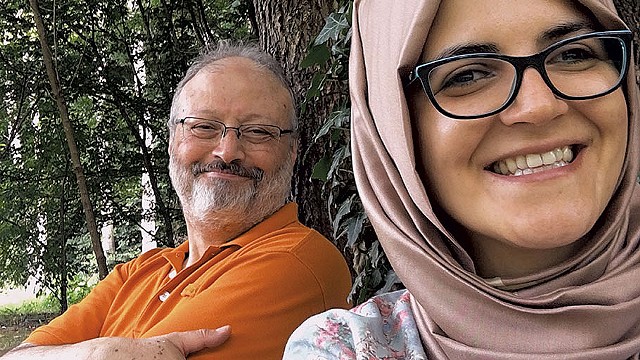 Our streaming entertainment options are overwhelming — and not always easy to sort through. This week, the Middlebury New Filmmakers Festival and Vermont International Film Foundation present a new installment of their Split/Screen virtual cinema program, this one curated by MNFF. (Find more info and tickets at middfilmfest.org.) I watched The Dissident, a ripped-from-the-headlines documentary about the murder of Washington Post journalist Jamal Khashoggi. Director Bryan Fogel also made the Oscar-winning sports-doping exposé Icarus.

On October 2, 2018, Saudi expatriate Khashoggi went to the Saudi consulate in Istanbul seeking documents to prove he was divorced from his wife so he could marry his Turkish fiancée, Hatice Cengiz. He and Cengiz were both apprehensive about the seemingly routine errand, because Khashoggi had left his homeland after criticizing the repressive policies of Crown Prince Mohammed bin Salman.

Cengiz waited outside the consulate, but her fiancé never emerged. Turkish prosecutors believe, based on an audio recording of Khashoggi's last moments, that he was assassinated and dismembered on the orders of bin Salman. The Central Intelligence Agency and the United Nations reached similar conclusions. Saudi authorities sentenced several men for Khashoggi's murder but have denied that it was a state-sponsored assassination.

Former president Donald Trump declined to impose direct sanctions on the crown prince over Khashoggi's killing. Now pressure is mounting on President Joe Biden to take a more aggressive approach to his "Saudi Arabia Problem," as a March 1 Post headline put it.

How do you make an exciting documentary about events that have already received extensive media coverage? Or generate suspense with a mystery that has, essentially, been solved, even as the shock waves continue to reverberate?

Fogel presents some exclusive material in The Dissident. Intimate interviews with Cengiz and an international array of Khashoggi's friends illuminate both his personal and professional lives, tracing his evolution from Saudi insider to gadfly to activist. Excerpts from the transcripts of Turkish intelligence's audio recordings leave a chilling impression of how he died.

But Fogel also makes an unexpected choice: He opens and frames the film not with the story of Khashoggi but with scenes from the life of a younger Saudi dissident, Omar Abdulaziz, who has sought asylum in Montréal.

When we meet the personable Abdulaziz, a friend of Khashoggi's, he's posting fierce critiques of bin Salman's government to YouTube from a room in the Fairmont Queen Elizabeth Hotel. "In Saudi Arabia, having an opinion is a crime," he declares. "But Jamal's death changed everything."

Later, Abdulaziz admits that he feels a certain personal responsibility for his friend's grisly demise. Fogel's documentary gradually reveals why. In the process, it unspools a wild tale of digital warfare that encompasses the appropriation of Israeli malware, the hacking of Jeff Bezos' phone, and the clash of rival Twitter armies known as "the Flies" and "the Bees."

More and more, documentarians are confronting the fact that a lot of momentous stuff in modern life happens online. It's a struggle to make Twitter hashtag battles visually exciting, but those battles matter in Saudi Arabia — where, we learn, eight out of 10 people use Twitter, versus two out of 10 in the U.S.

Fogel deploys a visual effects team to give animated life to the warring government troll armies and their dissident counterparts. (For other recent efforts to make social media cinematic, see A Thousand Cuts and The Social Dilemma.) Those CG flies and bees may look a little silly, but we're left with the sobering impression that struggles for social media supremacy have very real consequences, especially under governments that repress speech and expect journalists to be cheerleaders.

The Dissident isn't a deep dive into Saudi history and culture, nor does it explore the nuances of Khashoggi's and Abdulaziz's political views. But it does effectively demonstrate how battles for hearts and minds are fought today. And it leaves the viewer with a dismaying sense that world leaders may find the geopolitical price of justice for this particular dissident simply too high.

A Thousand Cuts (2020; pbs.org, rentable): In many parts of the world, being a journalist who doesn't toe the party line can be dangerous. This doc looks at one woman's fight to hold the government accountable in the Philippines.

The Square (2013; Netflix, Tubi, rentable): The Dissident mentions the role of Egypt's 2011 Tahrir Square uprising in shaping Khashoggi's political views. This doc offers a stirring primer on that pivotal event in the "Arab Spring."

Time (2020; Amazon Prime Video): The 2021 Oscar nominees are out! On the list of contenders for Best Documentary is this acclaimed look at a woman's struggle to get her husband's 60-year prison sentence for robbery reduced.

Some Kind of Heaven (2021; MNFF or VTIFF virtual cinema): Also on the Split/Screen program is this documentary that profiles four misfit residents of Florida's the Villages, the nation's largest planned retirement community.

The original print version of this article was headlined "The Dissident"