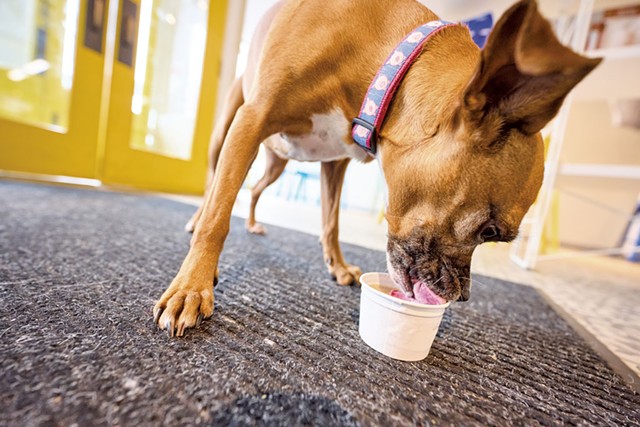 Ice cream is going to the dogs — but in a good way. Vermont's ice cream shops, snack shacks and creemee stands have really upped their pup-cup game in the last few years. Now, dogs with sophisticated palates can cool off with an occasional dish that's fancy enough to make a Starbucks Puppuccino blush.

Here are three local spots offering delights for canine companions, as well as sweet treats for their humans. 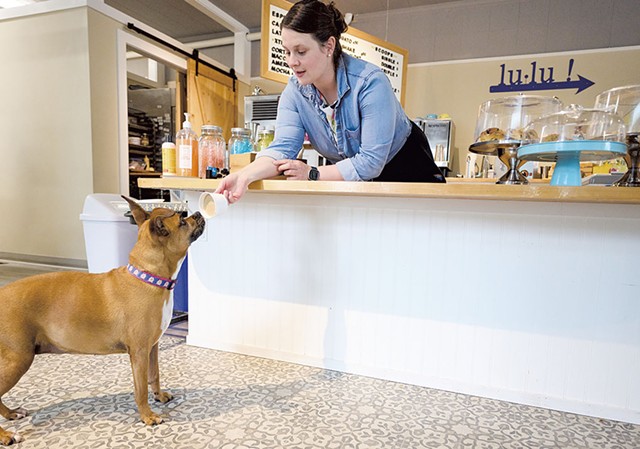 Lu•lu founder Laura Mack adopted Olive five years ago, after being fully charmed by that underbite and her Flying Nun ears. Now, the slightly lazy, lumbering boxer-miniature schnauzer-pit bull mix — named for Olive Hoover in Little Miss Sunshine because they share a similar full-body wiggle — spends her days going on wholesale deliveries with Mack and watching the world go by outside lu•lu.

"Olive has regulars that she's obsessed with," Mack said. "If she has had a long day of dealing with people giving her attention, she gets a doggy ice cream as a reward."

Mack had considered creating a dog-specific ice cream prior to rescuing Olive but finally made it happen once she had a connoisseur to taste-test everything. With her fine sense of taste and smell, Olive deemed the peanut butter-banana-honey combo the winner. (She wasn't so keen on a version that included blueberries.)

Now, lu•lu sells prepackaged four-ounce containers of the dog ice cream ($3.25) to a loyal following of local pups. (Well-behaved dogs are welcome inside the shop but not back in the production area.) It's safe for humans, though they might prefer the popular SlumDoug Millionaire, a curried peanut butter ice cream created by Mack's father, Doug.

"We take our ice cream ingredients really seriously," Mack said. "I knew I wanted ingredients that were really dog-friendly, more healthy and less sugary, and gentle for any of our four-legged friends."

The special treat is kept in a super-cold freezer; the lower temp forces dogs to slow down while they eat it, giving their humans time to enjoy an ice cream or coffee of their own, Mack said. The lu•lu team whips up batches of dog ice cream twice a week and sells three or four a day, on average. One big, fluffy regular comes in twice a week to stock up — and even carries his own bag out of the shop.

Olive waits patiently for her ice cream, sitting like a statue and watching Mack's every move. When it's time, she takes the cup in her mouth — aided by her underbite — and carries it gently and purposefully to her bed under the window. Five or 10 minutes later, when she's sure there's not a drop left, she pushes it away as if to say, "Take my cup, please. I'm finished." 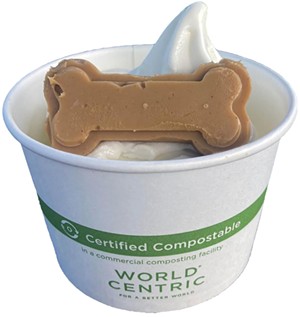 Kate Corbett calls herself a "closet animal activist." The owner of Kate's Food Truck in Jericho didn't stop at putting Doggie Delights on her menu; at the end of the season, she'll donate to an animal rescue 25 cents for each canine creemee sold.

"That's the main reason I wanted to have it," Corbett said of the dog-specific treat. "I want to do something to give back and help."

Corbett and her fiancé, Jonathan Villeneuve, started Kate's Food Truck with a soft launch in the summer of 2020. The large trailer is movable (with a semitruck), but it's parked pretty permanently in a lot owned by Villeneuve's parents on Route 15 — complete with a ramp up to a deck, funky lighting and lots of picnic tables.

The original concept was focused on elaborately topped French fries, Corbett said, building on poutine, gravy fries and cheese fries. The menu took off from there and now includes fancy burgers; chicken sandwiches; hot dogs; lots of vegan, vegetarian and gluten-free options (with a dedicated fryer); and Corbett's signature creation: the Maple Fry. The savory-sweet treat is made of a quart of hand-cut fries surrounding a cup of vanilla creemee, drizzled in maple syrup and topped with bacon bits.

The menu includes three types of ice cream. For creemees, Corbett adds all-natural extracts from Illinois-based Green Mountain Flavors to a high-fat local base to create classic chocolate, vanilla and maple, as well as rotating flavors such as peach, mint and lime. Corbett also offers nondairy, plant-based flavors from Winooski's Offbeat Creemee and hard ice cream from Gifford's in Maine.

Doggie Delights ($2.50) are new this year. A two-swirl vanilla creemee (called a "tiny" at Kate's) is topped with a housemade, bone-shaped peanut butter treat and served in a dish.

Originally, Corbett hoped to do a healthier option than a regular creemee — something made in-house specifically for dogs. She looked up recipes, tested combinations and gave them to dogs around the neighborhood, including her own. Peach is a feisty Boston terrier with selective hearing, and Iggy is an energetic and loving rescue dog from Texas.

"They weren't eating them right up," Corbett admitted about her early trials. "I was like, 'Well, I can't make this and have the dogs snub it.'"

Instead, she decided to go with a normal vanilla creemee and focus on making special dog-safe peanut butter treats. "That's what the dogs actually want to eat," Corbett said with a laugh.

So far, the treats have been a hit. Some people even let their dogs sit on benches and eat their Doggie Delight at the table — "which I love," Corbett said. "I'm such a dog and animal person. I wouldn't care if somebody brought their goat with them."

When the Kate's Food Truck season ends in early November, Corbett will tally the proceeds from Doggie Delights and have customers vote on which rescue will receive the money — along with a match from the business. She's also planning to collect blankets, pet food and other donations to bring to the winning rescue. 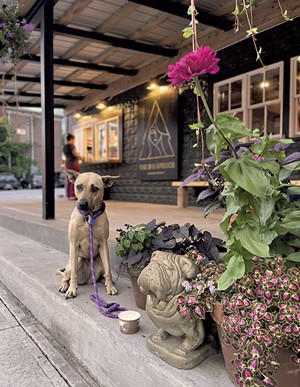 There's a lot of foot traffic along Bridge Street in Richmond — both two-legged and four. Everybody wants ice cream, and the Creemee Window on the front porch of the Big Spruce has the classics as well as creative culinary twists.

The restaurant's creemee program started at Hatchet, its companion restaurant across the street. When Gabriel Firman, founder and co-owner of both restaurants, opened the Hatchet space in 2015, it already had a popular creemee window. "It wasn't necessarily part of our plans, but creemee windows are a part of the fabric of a community," Firman said, "and we really didn't want an ice cream revolt."

For the first couple of years, the small window served the classics: premade vanilla, chocolate and maple. As the staff started to experiment with unique flavors and toppings, they realized the ice cream needed more room. When the Big Spruce opened across the street in late 2020, they gave the creemees a home of their own — and a dedicated chef.

The Creemee Window menu always has maple — again, to avoid revolt — but the other three rotating offerings often have a more culinary twist. To a local dairy base, they'll add local, in-season blueberries, toasted black sesame, matcha or creamy coconut; they add turmeric, cinnamon and ginger to make what they call Golden Milk.

"We're treating each flavor as its own dish, building on it with toppings that go beyond rainbow or chocolate sprinkles," Firman said. Toppings might include matcha or chocolate shells, sesame seed brittle, or shortbread-and-Kellogg's Fruit Loops crumble. "It's such a simple thing: milk and sugar," Firman added. "But there's every opportunity to make it something special, and we have staff that can execute that."

Last year, the Creemee Window offered every one of its flavors in special doggy cones made by Andy's Dandys, the Richmond dog biscuit bakery with an inclusive mission and training program founded by Andrew and Lucie Whiteford.

This year, the Creemee Window team has been busy exploring flavors for humans, Firman said, so the "doggo" offering — a kiddie-size creemee ($3) — comes in a regular dish. But they hope to bring back the Andy's Dandy's cones and add dog-centric flavors.

"The dogs love creemees," Firman said. He believes the doggy cones started because people felt badly that dogs didn't have their own treats. "Even though they don't want to share a cone with their dog, dogs are our friends, and [people] want to hook them up, too."