'The Dig' Is a Period Drama With Quiet Depths 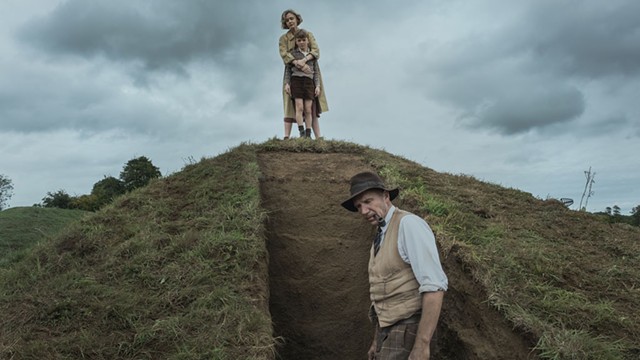 Our streaming entertainment options are overwhelming — and not always easy to sort through. My 86-year-old mom and I have very different tastes in movies, but when she told me recently that The Dig was a new favorite of hers, I was intrigued enough to give it a try. Inspired by the story of the excavation of the Sutton Hoo site in Suffolk, England, this Netflix Original offers one of the key assets of a film during a pandemic winter: It's full of beautiful landscape shots that make it easy to imagine you're somewhere else.

In 1939, as England teeters on the brink of war, well-off widow Edith Pretty (Carey Mulligan) hires Basil Brown (Ralph Fiennes) to dig up the mysterious mounds on her land. She and her late husband always dreamed of finding ancient burial artifacts there.

Brown is an autodidact archaeologist with a rural accent and rudimentary education, but he knows what he's about, and he and Pretty share a wordless understanding of why the site matters. When Brown makes a major discovery — a fifth-century ship burial — a team of prominent archaeologists from the British Museum descends on the site, eager to take over and take credit. Recently diagnosed with a serious illness, Pretty does her best to retain some control over the dig, even as she prepares her young son (Archie Barnes) for a dark and uncertain future.

The Dig is one of those movies that people describe as "classy" and "subtle" — or, less charitably, as "low-key" and "slow." Based on John Preston's novel and directed by Simon Stone, it looks and sounds like the most sumptuous Oscar bait, with a stirring score by Stefan Gregory and countless long shots of characters silhouetted against brilliant sunsets. But those characters are all life-size, and most of the climactic moments are muted. This is a determinedly small story about the pleasure and insight that people take from a brush with the past, even as they stand on the precipice of a new era they struggle to comprehend.

Fiennes and Mulligan do unshowy but strong work as two guarded people, disinclined to emotional displays, whose dependability and decency shine through. The closest either comes to an "Oscar clip" is a speech that Brown gives Pretty's son about the necessity of accepting failure — a humble insight, but a sound one.

Slightly more Hollywood is a fictional subplot involving real-life archaeologist Peggy Piggott (Lily James), her unhappy marriage, and her attraction to a dashing photographer and Royal Air Force pilot (Johnny Flynn). Even here, though, The Dig keeps the sentimentality dialed back to a slow burn.

At one point, Brown explains why people feel so driven to excavate the past: "From the first human handprint on a cave wall, we're part of something continuous." That search for continuity could help explain the appeal of The Dig, too. If this unassuming movie speaks to viewers right now, that could be partly because it portrays a time when authorities and experts were respected, modeling a more dignified approach to our own precarious era. To watch these stiff-upper-lip British characters facing the threat of world war with courage and humility is to immerse ourselves in a time when people expressed their convictions with actions rather than in performative tweets and YouTube videos.

Perhaps the quiet dignity we see in The Dig is partly a nostalgic fabrication. Certainly, it was part and parcel of the social hierarchies that until recently kept Brown from receiving his due credit for the Sutton Hoo discovery. Still, in a world where everybody constantly jockeys for attention, it's hard not to respect a movie that chooses substance over showmanship at every turn.

"Time Team" (1994-2014; Tubi, Amazon Prime Video): For fans of The Dig who are all fired up about unearthing the past, cnn.com recommends this British documentary series about archaeologists, particularly the Season 11 episode "Saxon Burials on the Ridge."

Sylvie's Love (2020; Amazon Prime Video): Interested in another relaxingly retro drama, this one with more romance? Tessa Thompson and Nnamdi Asomugha fall in love in 1950s Harlem in this acclaimed modern take on the classic midcentury melodrama.

Ammonite (2020; rentable): Or maybe you just want more science talk in your costume dramas? Saoirse Ronan and Kate Winslet star in this love story of a paleontologist and a convalescent, set on the English seaside in the 1800s. Look for it on Hulu in the near future.

The original print version of this article was headlined "The Dig"