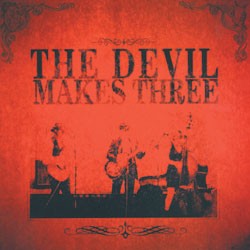 It’s unclear whether the Devil is a member of or merely an influence on the vintage-blues twang of Sacramento’s plucky trio The Devil Makes Three. Either way, the group gives it hell on its self-titled debut full-length recording. The austere collection of older studio work exalts flying bullets, jagged hearts and morning whiskeys.

It is unlikely the three are as fond of liquor as their work suggests — no veritable persons of drink could arrange guitar parts this delicately systematized. Lavishly ornate arrangements such as “Graveyard” and “Ten Feet Tall” are cornerstones of the disc. When queued up with a few of their stylishly impish tales, the band’s music creates a nicely demonic feel. “Starts off / Just some whiskey and wine,” hollers front man Pete Bernard in “Graveyard.” “Ends in a dark corridor / There ain’t no windows / There ain’t no doors.”

The band has an exceptional sense of tempo. Bernard and fellow guitarist Cooper McBean time each track with dexterity so precise that the absence of any frontward percussion is immaterial. “Old Number Seven,” which both refers to and reveres Tennessee’s finest — Jack Daniel’s — moves at brimming, campfire cadence.

Regrettably, stand-up bassist Lucia Turino does not appear much as a vocalist until the album’s closing stages. The three create a nice harmonic enclave in moments. Turino is quite audible on the record’s live performances, which are incorporated somewhat clumsily in a “Bonus Tracks” section. Cuts like “Dynamite” and “Oceans Cold” display the trio’s ability to excite small rooms.

Contemporary groups plying the dubious vintage-blues/modern rockabilly genre can come across as forced, or feigned. And it might seem awfully silly to convey to giddy audiences that there is something Satanic in raucous songs about strong liquor and salacious women. After all, the listeners are, more often than not, wary light-beer drinkers. But The Devil Makes Three manage to pull off their shtick with a light dose of inanity and impressive technical skill.

The group concludes its Vermont tour this week with a pair of shows: Wednesday, July 30, at the Langdon Street Café in Montpelier, and Saturday, August 2, at the acclaimed Northeast Kingdom Music Festival in East Albany.