'The Devil All the Time' Is a Blood-Soaked Epic 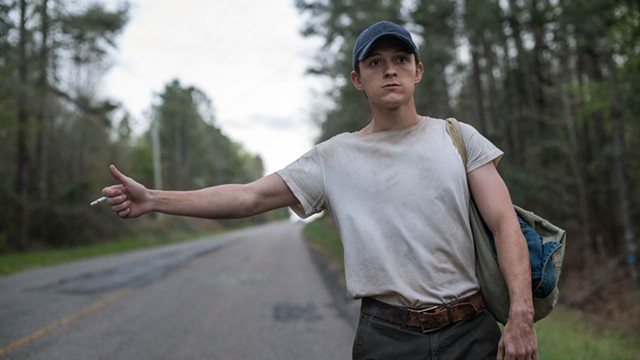 Our streaming entertainment options are overwhelming — and not always easy to sort through. This week: I've been seeing so much excited Twittering about Robert Pattinson that I broke down and watched him in this new Netflix release directed by Antonio Campos (Afterschool, Christine) and based on Donald Ray Pollock's southern gothic novel. Turns out there's not a ton of R. Patz in this ensemble drama, but there are buckets of blood.

Violence, religion and bad luck link two generations of people living in hardscrabble towns in Ohio and West Virginia. Willard (Bill Skarsgård) comes home from World War II with a head full of horrors and teaches his son to pray to a primitive cross he calls a "prayer log." Hoping to bribe God into curing his wife's cancer, he "sacrifices" his son's beloved dog, then dies by suicide shortly after his spouse succumbs.

Left an orphan, Willard's son, Arvin, grows up into Tom Holland, the fresh-faced kid who plays Spider-Man in the Marvel movies. He's fiercely protective of his adopted sister — a second orphan, Lenora (Eliza Scanlen). Much like Arvin's, her dad (Harry Melling) listened to very bad advice from the deity in his head. When pious Lenora crosses paths with a smooth-talking, hypocritical preacher (Pattinson), bad things befall her, too.

Meanwhile, a married pair of serial killers, Carl and Sandy (Jason Clarke and Riley Keough), prowl lonely highways looking for prey. And an unscrupulous sheriff (Sebastian Stan) tries to solidify his hold over a small town.

The trailer for The Devil All the Time lured me with its echoes of the Coen brothers in their more "serious," award-winning mode. It looked lengthy, impeccably filmed, immersive and a wee bit pretentious. And it's all of those things, plus stuffed with so many juicy performances that it will leave you feeling like you've seen a "real" movie.

Full of unhinged intensity, Melling jumps off the screen in his small role, just as he did in the Coens' The Ballad of Buster Scruggs. Pattinson appears to be channeling the oiliest of televangelists; his Tennessee accent is questionable, but certainly memorable. Holland convincingly portrays a broken but not unbowed young man. And Keough brings tawdry panache to the role of Sandy, one of the few characters who's allowed meaningful development.

The thing is, if you're familiar with the work of Cormac McCarthy and his ilk, you know exactly where this movie's going. Pollock, whose folksy narration contributes the film's only humorous note, seems wedded to the notion that truth lies in violence alone. "Only in the presence of death could he feel the presence of something like God," the narrator tells us of Carl, while the sheriff opines that some people are "born just so they could be buried."

This circular, nihilist worldview, in which bloodshed continually begets bloodshed, is ultimately a little dull. What makes The Devil All the Time worthwhile anyway, besides the parade of star turns, is Campos' grubby evocation of midcentury small-town life, aided by Lol Crawley's cinematography. There are a few scenes in a seedy bar/brothel that barely connect to the plot, but they occasion a shot of a mounted deer head so bizarrely sinister that it would fit right into a David Lynch movie.

The movie's familiar themes may not cling to you, but its atmosphere does — like a miasma of cigarette smoke mixed with the stink of fried food and a hint of blood.

No Country for Old Men (2007; Starz, rentable): Joel and Ethan Coen's dark Western based on McCarthy's novel seems like a clear predecessor to The Devil All the Time. For a midwestern inflection, rent Fargo or watch the series inspired by it on Hulu. Or, for a dose of far-north nihilism, there's Netflix's uneven Hold the Dark.

Wise Blood (1979; HBO Max, Kanopy, Criterion Channel, rentable): Pollock's work has been compared to Flannery O'Connor. The mistress of chilling short fiction plumbed the grotesqueries that a hunger for God can engender in her cult novel, brought to the screen by John Huston.

Coal Miner's Daughter (1980; Peacock, rentable): For all the horror on display in The Devil All the Time, Crawley's camera manages to find beauty in the new leaves budding around a shotgun shack. So does Michael Apted's Oscar-winning Loretta Lynn biopic, whose sweeter yet not sanitized view of southern poverty could make an excellent palate cleanser.

Movie Reviews The Devil All the Time Netflix Bill Skarsgård