Book review: Washed in the Blood by Lisa Alther 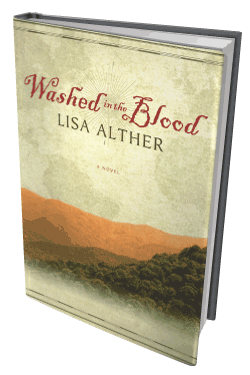 Sometimes a good author and an enticing concept yield a book that just doesn’t work. But it’s rarer for an author to take up the same subject twice and make it work the second time.

Burlington’s Lisa Alther does that in her new novel, Washed in the Blood. It’s essentially a fictional reworking of the themes from Kinfolks: Falling Off the Family Tree (2007), the first memoir from this author who is best known for her 1975 best seller Kinflicks. While no masterpiece, Alther’s return to fiction is a plot-driven, absorbing read — even at nearly 500 pages — that reminds us that colorful storytelling is her forte.

In Kinfolks, Alther set out to solve the mystery of her ancestry. Raised in the deep South with a grandmother who touted her early-settler pedigree, Alther came to suspect later in life that she’d been kept away from certain rural family members because they were Melungeons — isolated Appalachians of mixed European, African and Native American ancestry. Some of those early European settlers, in short, had gotten busy with the natives and with free or escaped slaves, then put down roots and intermarried, starting America on its rocky path to multiculturalism.

It was a promising hook for a memoir. But then Alther came smack up against the dearth of available information about her ancestors and Melungeons generally, and the narrative trailed off into lengthy descriptions of scholarly controversies and the author’s pilgrimages to various places that might or might not be her Old Country.

Alther clearly perceived that there was a great story to be told about Melungeons: They defied the South’s traditional obsession with racial purity, and their frequent six-finger mutation made them bogeymen in Appalachian folklore. But the only way for her to tell that story, it turned out, was to make it up. In Washed in the Blood, freed from the constraints of nonfiction, Alther does just that.

The novel is a hefty, research-driven historical saga like the ones James A. Michener used to write: Divided into three sections, with three blood-related casts of characters, it spans nearly 400 years. In the first section, set in 1567, we follow the young Spaniard Diego Martin as he leaves his native Galicia for a trip to the New World — a voyage that brings him more harrowing trials than riches.

In the second section, set a few decades before the Civil War, our protagonist is a young Quaker who comes south to educate the folk of poverty-ridden Couchtown, Va. He ends up adopting the cause of the mixed-race Martin clan as they fight the U.S. government’s relocation plans for native Americans.

In the novel’s last section, which spans 1909 to 1930, we watch Diego Martin’s distant descendants grapple with Jim Crow laws and state-sanctioned eugenics that aim to eliminate any evidence of racial blending in early America. Here, the many ironies of the Melungeons’ history bear fruit because the reader knows the true pedigree of the characters — some classified as colored; others, like Alther’s grandmother, boasting of their colonial roots at the country club — better than they do themselves. Little do the modern-day Martins know that their handed-down female name “Galicia” refers to a part of Spain — or that, in addition to being African, English and Cherokee, they are Jewish.

Indeed, these ironies are more interesting than the characters themselves. In each section, Alther has made her focal figures naïfs whose eyes are gradually opened to human cruelty and social injustice, and this rather pedantic blueprint robs them of individuality. (Her players also share a tendency to fall wildly in star-crossed love.) The only character who really stands out is Don Sebastian de Silva, a would-be conquistador with a dark past who takes Diego under his wing in the first section.

Where Alther excels is in fleshing out her historical settings: what people ate in these eras, what they wore, how they endured the rigors of nature and established the comforts of home. Those comforts come across with special vividness. When Diego eventually escapes from the brutal, authoritarian world of the conquistadors and adopts the comparatively laid-back lifestyle of the natives, it’s hard not to breathe a sigh of relief (even while thinking, inevitably, of Dances With Wolves). And the 19th-century Martin homestead is so lovingly depicted that the reader feels its loss.

The novel’s prose tends to the pedestrian — “Now he was the center of her world. If she was not with him, she was thinking about him,” Alther writes about a girl in love — but it ticks along at a good rate. Readers who yearn for more lyricism and psychological depth may find themselves pulled in by the fast-paced narrative anyway.

In this way, Washed in the Blood recalls Alther’s most popular novel, Kinflicks, which was less a character study than a breakneck tour of a crazy American decade: In a few years, its malleable heroine transforms from a Southern debutante to a hardcore intellectual to a radical lesbian to a rural housewife. Similarly, the central characters of Washed in the Blood often seem more acted upon by history and circumstance than acting. Their short-sightedness is never more frustrating than at the novel’s end, where the story takes a soap-opera turn that is almost, but not quite, justified by Alther’s themes of forged ancestry and self-deception.

Here it becomes clear that Alther has no uplifting moral to draw from the saga of the Melungeons, whose survival depended, to a large extent, on forgetting or obscuring who they really were. (The word “Melungeon” never appears in this book.) As a result, by the time Southerners started proudly reclaiming their Melungeon ancestry, like Alther in Kinfolks, there wasn’t much left to reclaim.

While it doesn’t build to the triumphant denouement typical of immigrant stories, the history Alther imagined for one Melungeon family drives home her point that race in America has never been a simple matter of black and white.

"Washed in the Blood" by Lisa Alther, Mercer University Press, 459 pages. $26. Alther will read from the book on Thursday, March 15, 6:30 p.m. at the Flying Pig Bookstore, Shelburne.

In this excerpt from Washed in the Blood, Will Martin, who grew up in a Melungeon community known as Mulatto Bald, visits the African American side of town.

The people Will passed smiled or spoke in greeting, none seeming surprised by the presence of a white man in their midst. Were they just being polite to a stranger, or did they see him as one of them? He came to a store housed in a rambling frame building. Going inside, he spotted people eating lunch at several wooden tables. He sat at an unoccupied table and read the menu written in chalk on a blackboard on the wall. A young woman in a red headscarf came over to take his order. He asked for soup beans, collard greens, and cornbread.

As he sopped up the liquid from his beans with a chunk of cornbread, he realized that although he had grown up in similar surroundings, he had not grown up knowing that he was the heir of slaves transported from Africa. Perhaps he was, but that possibility had gone unspoken on the bald. However horrible the history of these people in the shantytown, at least they had a history. And they had the self-assurance that came from knowing who they were and where their ancestors had come from, an assurance that he and most on Mulatto Bald lacked.

The bewilderment from all those years of uncertainty washed over him. Was he an Indian? A Negro? White? Portuguese? All of those? He didn’t know. His mother and grandmother didn’t know. No one on Mulatto Bald knew. And there was no way to find out. Even if someone had claimed to know, there was no way to prove it. Their ancestors had long ago simply clammed up, no doubt trying to protect their descendants from persecution, at the expense of robbing them of their identity.