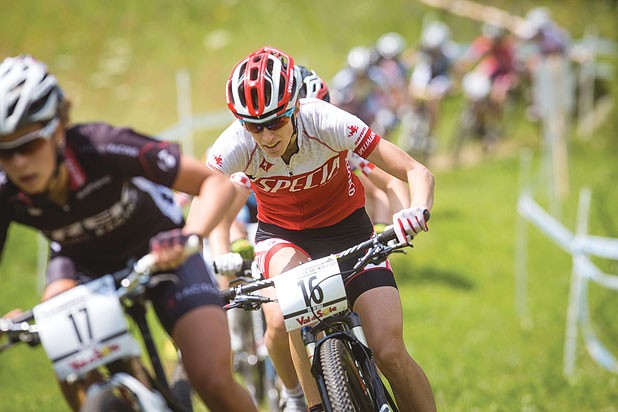 Imagine for a moment that you are one of the mountain-biking superstar sisters Lea and Sabra Davison. You grew up in Jericho, Vt., and became the sort of athlete who can dominate any sport you choose: running, skiing, riding. You make Middlebury College proud.

In 2007, you found the Little Bellas nonprofit mountain-biking mentoring program at the Catamount Outdoor Family Center in Williston for girls ages 7 to 14, because at your own races, the boys far outnumber the girls.

Little Bellas grows and grows. You’re now nurturing more than 300 budding mountain bikers each year — not only in Vermont but also in Monterey, Calif.; Lakewood, Colo.; Chequamegon, Wis.; and Providence, R.I. You inspire one 8-year-old Little Bella to find the courage to write to Cannondale Bicycle Corporation and ask why they don’t have any girls in their catalog.

In 2012, you learn that your beloved Catamount Outdoor Center has been chosen to host the finals of the USA Cycling Pro Mountain Bike Cross Country Tour (Pro XCT) – aka National Finals. The Super Bowl of the American mountain biking.

That is, until you realize that, at this race, the top female riders will earn only 65 percent of what the top male riders earn in prize money. Only the top nine women will be paid, while the top 15 men will. The pay is unequal, the standards outdated.

If you are Lea and Sabra Davison, what do you do?

What you’ve always done: You step up. And win. But in a very nice way.

“To have National Finals in my backyard, that’s a dream come true,” says Lea Davison, 30, a Specialized-sponsored rider who competed in the London 2012 Olympic Games. Her sister Sabra, 28, works at Catamount and oversees Little Bellas.

Catamount produces the country’s largest and longest-running mountain-bike training-race series, but it’s been unknown to many top riders — until now. The dream of hosting such a big event at the nonprofit outdoor center began to take shape last summer, when Sabra Davison, Catamount executive director Eric Bowker and Catamount member Eric Berliner discussed what it might take to stage a Pro XCT event as a fundraiser. Given their experience putting on the Green Mountain Cyclocross race each fall, the Catamount crew was confident it could meet the challenge.

“It turns out USA Cycling was looking to expand the scope of the series, as it had not come east of the Midwest in a few years,” Bowker says. He adds that being chosen to host the race — called the Specialized Catamount Classic — will not only raise funds for the outdoor center but also enhance its reputation as a mountain-biking destination. “It’s important to keep Catamount on the map, and a prestigious event is a good way to accomplish that,” he says.

But last spring, when Sabra learned that the August 3 and 4 races had much smaller purses for women, she experienced a moment of deflation. “I said, ‘I can’t run a Little Bellas camp and pay these women less,’” she recalls.

Though riders have lobbied for equal pay in the past, Lea says, the mandate of the international governing body Union Cycliste Internationale, or UCI, is that women be paid 65 percent of the men’s take. “The old generation fights the fight,” says Lea, “but the new generation comes up and doesn’t know any better.”

So the sisters approached G-Form, a Rhode-Island-based impact-protection company and one of the race’s sponsors. Owner Dan Wyner immediately offered to pony up more money for the top female riders at the Pro XCT. Enough to surpass the men’s pay.

“It seemed like the wrong message to be sending to all these next-generation women racers, that they should have to feel their events were somehow of less importance or significance in any way,” Wyner writes in an email. “Making this women’s purse higher was just our way — without taking dollars away from any athlete — to highlight a bit more clearly the nature of the inequality and that it’s time for it to end.”

“I was so pumped — it was the greatest idea,” Sabra says about Wyner’s offer. “We need to make up for lost time. It’s hard to get women to travel here because they’re not being compensated.”

Now, the top woman at the Catamount Classic Pro XCT will earn $314 more than the top man. “It isn’t a lot, but it says more,” Sabra explains, and adds that the women will also race before the men. “We’re making them ride in the premier spot — we’re completely flipping the weekend on its head, and not in a malicious way.”

“We support them racing,” says Lea. “We’re not men haters.”

Still, some feedback about the flip-flop has been “very interesting,” Lea adds.

“People are shocked [we] would pay the women more, even though that’s what happens every weekend [when men earn more],” Sabra says. “Some of the sentiment we’ve gotten, even from women, has really echoed where we are with it — which is, not there yet.”

By including Little Bellas in the weekend, the Davison sisters, G-Form and Catamount hope to change discriminatory attitudes from the ground up. The young riders will participate in a camp at Catamount the weekend of the race, meeting the athletes “while gaining skills and confidence,” Bowker says.

Wyner adds that role modeling begins with the founders of Little Bellas themselves. “Lea and Sabe are inspirations both on and off the road,” he says. “Not only are they great athletes, they take advantage of an opportunity to make a difference in the world — they don’t just race and go home.”

The synergy of antidiscriminatory efforts with a grassroots girls’ program such as Little Bellas offers a multifaceted solution to a multifaceted problem, suggests Lea.

“I feel like it’s coming together with this event — it’s the next generation of mountain bikers coming up,” Lea says. “They’re going to know that it’s the right thing to do to get equal prize money and for women to be equal.”

Already the event has triggered awareness and momentum beyond the August 3 and 4 races. Bowker reveals that the sponsor of September’s Green Mountain Cyclocross, ENGVT, has stepped forward to offer equal prize money for the women. The Davison sisters see a near future in which women — who typically have to hold down jobs outside of their sport to make a living — receive more travel grants to help offset the costs of competition. And they look to a more distant future when equality at pro races is a given, not an anomaly.

Says Lea, “This is the tip of the iceberg, really, of what we could be doing.”

The original print version of this article was headlined "Raising the Handlebars."