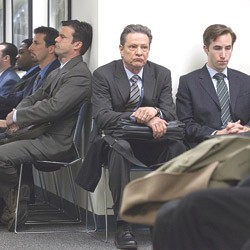 Up in the Air told the darkly comic story of a professional hatchet man who touched down just long enough to wreak havoc in people’s lives before flying off in first-class comfort to the next stop on his employee hit list. This feature debut from writer-director John Wells approaches downsizing from a different perspective. The Company Men takes a long, hard look at the kind of human havoc George Clooney’s character left in his wake.

We watch as three men, executives at different levels in the same fictional Boston conglomerate, GTX, fall victim to corporate greed. The first is played by Ben Affleck in one of the strongest performances of his career. Bobby Walker is a 37-year-old sales machine with a $160,000 salary, a mansion in the suburbs, a Porsche, a loving wife (Rosemarie DeWitt) and two kids. When he’s cut loose in a round of firings designed to boost the company’s stock price, he’s certain he’ll find another job in a matter of days. And then he learns what it’s like out there.

Can you think of an actor who does desperation better than Chris Cooper? His face was made for it. Here he plays the second casualty, Phil Woodward, a 30-year employee who worked his way up from the factory floor of the ship-building division. He knows there’s no starting over. After he gets the ax in the next round of cuts, his wife makes him stay away from home until six so the neighbors won’t know he’s lost his job.

Both Bobby and Phil feel betrayed by Tommy Lee Jones’ Gene McClary. He’s not only the No. 2 man at GTX and its cofounder, but also their close friend. What they don’t know is that McClary has been storming into meetings and reading the riot act to the CEO (Craig T. Nelson), protesting the bloodbaths, until he is finally handed his own pink slip for his trouble. This although the company’s No. 1 man was Jones’ college roommate and, until recently, his best friend. A merger is in the works, Nelson stands to walk away with $600 million, and he’s not about to let minor details such as friendship, loyalty or decency get in the way.

So, yes, a bitter, dispirited view of the way business is done these days pervades the film. But the cool thing is that Wells finds the humanity, which has vanished from the boardroom, alive and well outside it. Kevin Costner, for example, is great as Jack Dolan, Bobby’s blue-collar brother-in-law. He runs a small-time construction business and offers work to the laid-off Bobby. At first, the thought is laughable. A few months later, when Bobby’s home and car have been sold, and his family is installed in his parents’ house, the job is a lifeline. A most unexpected friendship develops.

Jones’ character provides the moral center of the movie. (Except for the part where he’s having an affair with a much younger woman.) He fights tooth and nail to prevent downsizing, even though he stands to profit enormously from its consequences as one of the company’s largest shareholders. When that battle is lost, he takes stock of his life, his friendships, his values and the current state of the American workplace. Then he does something remarkable.

Movie-critic law prohibits my telling you what that is. What I can say is that, thanks to a poignant, perceptive script and powerful performances all around, The Company Men proves one of the more uplifting movies in recent memory, despite its deadly serious subject matter. Whatever kind of business it does at the box office, that’s a pretty impressive bottom line.