The Committee Shuffle: What the House’s New Lineup Reveals About Its Priorities 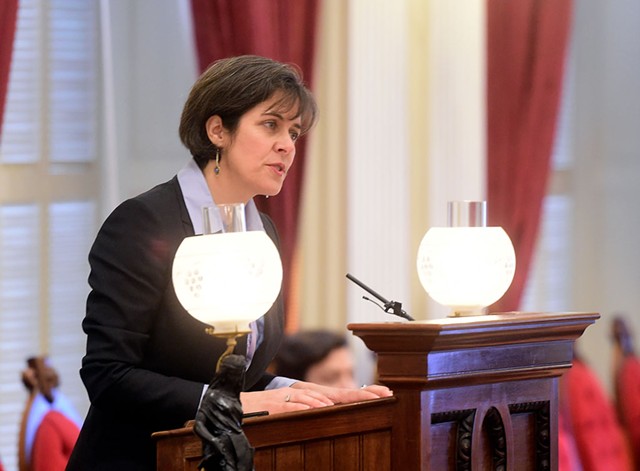 Democratic leaders of the Vermont legislature unveiled new committee lineups last week, revealing some major clues about their priorities for the new biennium. New chairs and new members, in many cases, set the stage for new agendas.

House Speaker Mitzi Johnson (D-South Hero) made a lot of changes, mostly by necessity. She had to find spots for an unusually high number of incoming freshmen. Of 14 committee chairs in the House, five retired last year, and the speaker replaced two others.

"I do have a driver's license, and I occasionally rent a car," McCormack said. "I haven't owned a car since 2002, when my old 1983 Nissan Sentra couldn't pass inspection."

Johnson chose McCormack because she wants the panel to take a broader view of transportation. "Whenever we talk about workforce development and job opportunities, transportation and childcare are the biggest barriers," Johnson said. "Curt knows the public transportation resources we have."

That's because he's a frequent customer. "Almost every day I have to consider transportation," McCormack said. "I take Amtrak. I take the bus. I walk and ride a bicycle."

A better transit system is part of the committee's expanded charge. There's also a new focus on climate change. "We need to cut carbon emissions in transportation," said McCormack. "It's the single largest source in Vermont."

Brennan is disappointed at his removal. "The chairmanship meant a lot to me," he said. But, he acknowledged, "If [addressing emissions] is the direction, I'm not the one to lead that charge." As a consolation prize, Brennan was moved to the powerful House Ways and Means Committee, which handles tax policy. He'd have preferred to stay put. "I'm not a tax guy," he said.

Some Republicans see a partisan motive in Brennan's removal. But the minority caucus will still have one chairmanship: Rep. Michael Marcotte (R-Coventry), the new head of the House Commerce and Economic Development Committee. "Our No. 1 priority is workforce," said Marcotte. "It's a mutual priority." True enough, although the proposed solutions often vary across party lines.

Brennan wasn't the only chair to be shifted. Rep. Maida Townsend (D-South Burlington) is no longer chair of the House Government Operations Committee, which handles state and local government issues, elections, and open meetings and public records laws. Like Brennan, she's been moved to a money committee: House Appropriations.

Gov Ops' new chair is Rep. Sarah Copeland Hanzas (D-Bradford). Her charge is to turn a technocratic committee into a watchdog. "It's daunting but also liberating," she said. "We can ask questions of any state agency."

Johnson sees Copeland Hanzas as a sort of multi-tool who has "played a lot of different roles and understands a lot of policy issues." She served as majority leader under then-speaker Shap Smith. After Smith's departure, she ran for speaker but lost to Johnson.

The committee that's gotten the biggest makeover, in terms of membership and focus, is House Energy and Technology. Johnson acknowledged that in the 2017-18 session "it wasn't a resounding success. The committee didn't take on the regulatory role that it could have."

Former chair Stephen Carr retired last year. His replacement is Rep. Tim Briglin (D-Thetford). "Tim is not easily deterred," Johnson explained. "He has good problem-solving and managerial skills." Briglin also has deep experience in corporate finance and is a former staffer for Sen. Patrick Leahy (D-Vt.) and a two-time delegate to the Democratic National Convention.

Briglin's panel encompasses four highly technical subject areas: energy, telecommunications, broadband and information technology in state government. "The subject matter is so granular," Briglin noted. "Not many in the legislature have relevant background."

Two committees have traded places. House Agriculture and Forestry had long enjoyed the spacious Room 31, reflecting the historic importance of farming in Vermont. The panel's membership has been reduced from 11 to eight, and it's been moved to the relatively compact Room 32. House Education gets the big room now. "Education has drawn bigger crowds for a while," Johnson said. "It's a matter of logistics."

Johnson denies that the move is a demotion for Agriculture. "That was not my intention at all," she said. "I want all committees to be involved in rural issues." That meant shifting some members to other panels, such as Rep. Harvey Smith (R-New Haven), a retired dairy farmer who's now on Natural Resources, Fish and Wildlife. But also, Johnson admitted, "There aren't as many members requesting Agriculture." Sign o' the times.

The Senate saw far less turnover, but two changes are worthy of note. The five-member Transportation Committee will now include Senate President Pro Tempore Tim Ashe (D/P-Chittenden) and freshman Sen. Andrew Perchlik (D/P-Washington), both advocates of fighting climate change. And Sen. Phil Baruth (D/P-Chittenden) has a seat on Senate Judiciary. He plans to propose a waiting period on all gun purchases. Baruth's placement may be a signal that Senate leadership is amenable to new gun legislation.

The hoopla surrounding Gov. Phil Scott's second inauguration concluded Saturday night with an inaugural ball at the Champlain Valley Exposition. The donor list in the event's program makes for entertaining reading; it's a who's who of the powerful and influential around the capital. State and national businesses, interest groups, and lobbyists all chipped in to fund the event.

But the list is less informative than it was for Scott's 2017 wingding. That time, the program listed donors by category. "Platinum" sponsors gave at least $5,000, "gold" status cost $2,500 and "silver" was a cool grand. The 2019 program contains a single alphabetical list with no mention of the size of each party's donation.

Scott administration officials did not return requests for comment on the event.

Because the inaugural ball's proceeds go to Scott's charity, Vermonters United to Help, all but $25 of each ticket is tax-deductible. Sweet deal. But even sweeter is a night of access to the governor and his top officials — not to mention the gratitude of the governor.

All aspects of the health care industry were on the list, including the University of Vermont Health Network, Blue Cross Blue Shield of Vermont and PhRMA (the pharmaceutical industry's lobbying organization), plus MAXIMUS and Optum, two Vermont Health Connect contractors.

The energy sector also stepped up, with Green Mountain Power, Vermont Gas, Vermont Electric Power Company (which operates the state's electricity grid) and TDI New England funding the gala. The latter firm has proposed a power line on the floor of Lake Champlain that would carry power from Hydro-Québec to southern New England. The governor is a staunch backer of the plan.

And look, there's the Toy Industry Association, last seen in 2018 lobbying against a bill to regulate hazardous chemicals in children's products — a bill ultimately vetoed by the ball's guest of honor.

All this chumminess between special interests and elected officials raises the question of influence peddling. "That's ridiculous," said Secretary of Civil and Military Affairs Brittney Wilson. "The governor was pleased to raise funds to support children's programs this year."

No doubt. And governors of all stripes have done the same thing. But still, it sure looks like some have more access than others.

Alden subsidiary Digital First Media/MNG Enterprises is offering $12 per share, a 41 percent premium over Gannett's year-end stock price. In a Monday press release, Digital First accused Gannett management of making a series of strategic blunders and failing to show that it's "capable of effectively running this enterprise." The release said that Digital First is "committed to maximizing value for all Gannett shareholders."

Gannett's response was to urge caution while its board "carefully review[s] the proposal" to determine the best course for Gannett and its shareholders.

Alden newspapers, said veteran journalist and Vernon resident Martin Langeveld, are "not being operated as community resources. [Alden] sees its communities as cash machines." Langeveld should know. The former publisher of the Brattleboro Reformer lost his job when Digital First took over the paper.

But his attitude is widely shared by those who observed Digital First's ownership of three southern Vermont newspapers — the Reformer, the Bennington Banner and the Manchester Journal — as well as the Berkshire Eagle of Pittsfield, Mass. The papers were basically sucked dry by Digital First before being sold in 2016 to a Pittsfield-based investor group, a move that almost certainly saved them.

Alden's specialty is squeezing cash out of distressed properties, and it does a good job. Last May, Doctor got hold of the privately held firm's financials for 2017, which showed that Digital First enjoyed an operating margin of 17 percent that year, "well above industry norms," he wrote.

Gannett has made round after round of cuts at the Free Press to keep the profits coming, most recently eliminating two editor positions this month. If the sale goes through, expect the new owners to take even more extreme measures: by slashing costs to the bone.

Meanwhile, Seven Days has hired Kate O'Neill on a one-year contract to provide in-depth reporting on Vermont's opiates crisis. Find out more on page 28 of this issue.

As we say hello to Kate, we must say goodbye to staff writer Kymelya Sari, whose work has graced Seven Days' pages for the better part of three years. In February, Sari will return to her homeland of Singapore after five years in the States.

Sari came to America in 2014 for a journalism program at Columbia University. "I thought I'd be in the U.S. for a year," Sari said. "Then I met [Seven Days deputy publisher] Cathy [Resmer] at my school's job fair. I accepted a six-month fellowship." Which was extended far beyond its original expiration date. But now, she said, "My work visa is going to expire at the end of next month."

Her primary beat was covering Vermont's New American community, and we will miss her keen insight and storytelling skill.

Correction, January 21, 2018: An earlier version of this column inaccurately described Rep. Harvey Smith's occupation. He is a retired dairy farmer.