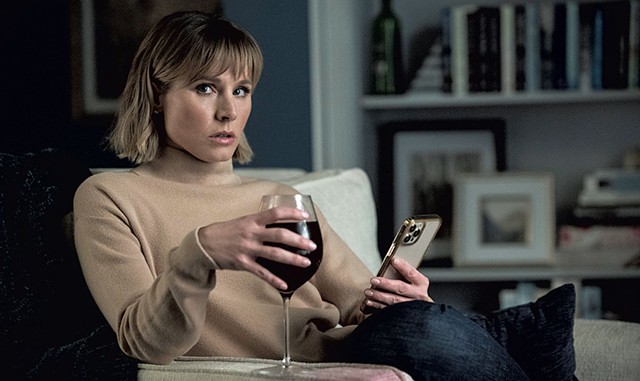 We're deep in the winter doldrums, and that's right where Netflix wants us. What better time to hook us in with an endless supply of limited series that we might be willing to try just because they resemble something we've already watched?

The streaming service's algorithm knows I like murder mysteries and stories about women on the verge of nervous breakdowns. Because I (unfortunately) watched Netflix's 2021 adaptation of The Woman in the Window, it fed me this cannibalistic parody of its own movie in the form of an eight-episode series. And, yes, I watched that, too.

Anna (Kristen Bell) lives in an upscale suburb, whipping up casseroles in her HGTV-ready kitchen for a family that never materializes. Her husband and daughter were taken from her by an unspeakable (and very unlikely) tragedy. Now she spends her days trying to find people to nurture and her nights pouring enormous glasses of red wine.

While quaffing said wine, Anna spies on the house across the street, home of her studly new neighbor (Tom Riley) and his motherless daughter (Samsara Leela Yett). One fateful night, she watches in horror as a brutal murder occurs.

Given Anna's tendency to hallucinate, however, we can't be sure she saw a murder at all, or that she herself wasn't wielding the knife. After the cops rebuff her report for lack of a corpse, she sets out to solve the case herself.

The title of "The Woman in the House Across the Street From the Girl in the Window" is the wittiest thing about it. If you're familiar with the wildly popular literary genre of domestic thrillers (The Girl on the Train, The Woman in Cabin 10, Gone Girl, The Good Girl, The It Girl and so on), then you know instantly what to expect. It could be a title created by an algorithm.

All stories built on formulas are ripe for parody, and over the years the publishing industry has perfected a formula for best-selling suspense novels about unhinged suburban white women with gorgeous kitchens. Someone needed to mock that formula, and now someone has tried.

Despite the presence of Michael Lehmann (Heathers) in the director's chair, however, "The Woman in the House..." never even approaches the heights of wicked satire. While its short episodes go down easily, and Bell is a skilled comedic actor, the show never finds a consistent or effective tone.

There's more than one valid way to approach a genre parody. You can go broad, tossing every single genre cliché into a hopper to see what kind of absurdity emerges, à la Airplane! or Scary Movie. Or you can go subtler (think Scream), crafting a story that appeals to genre fans while also encouraging them to think critically about what they're enjoying.

The creators of "The Woman in the House..." don't seem to know what they're doing. Rather than mock a whole array of tropes and characters, they stick close to the plot of The Woman in the Window, which was itself an obvious riff (though not a funny one) on Alfred Hitchcock's Rear Window. Besides a missing family, a wine habit and mysterious noises in her house, Anna even has a phobia that keeps her housebound, just like Amy Adams' character — who was also named Anna.

It's enough to make viewers feel trapped in a hall of mirrors, and perhaps that's the point? But meaningful satire — actual commentary on why this genre keeps repeating itself — never manifests. Are we supposed to root for Anna as she rediscovers her purpose in life and hooks up with a mysterious stranger (Benjamin Levy Aguilar) in a scene that verges on NC-17? Or are we just supposed to laugh when the pair upsets Anna's gigantic collection of wine corks in the course of their amorous acrobatics?

The series has some decent visual gags (watch Anna's daughter's gravestone!) and a few jokes that successfully cross over into the heady realm of absurdity. Cameron Britton is a deadpan hoot as Anna's sinister handyman. The solution of the mystery is suitably silly, but it's also way too predictable.

"The Woman in the House..." is so derivative of The Woman in the Window that it can't succeed as either parody or thriller, but it tries to do both. Luckily for streaming services, viewers in the grip of cabin fever are as desperate for distraction as poor Anna is. Let's just go easy on the red wine, OK?

Gone Girl (2014; Hulu, rentable): David Fincher's thriller about the disappearance of a seemingly perfect wife is perhaps the best of these movies, just as Gillian Flynn's source novel outdoes its literary imitators.

High Anxiety (1977; HBO Max, rentable): There haven't been many cinematic parodies of the suspense genre, but Mel Brooks went for broke with this very silly take on the films of Hitchcock, also involving a protagonist with a pesky phobia.