The Church Street Marketplace Spruces Up With a New Mural

About a year ago, Leunig’s Bistro co-owner Robert Fuller was passing through Alabama on his BMW motorcycle en route to Florida when he came on the town of Dothan. The self-described Peanut Capital of the World, Dothan is also famous for its dozen or so murals depicting notable local personages and scenes from town history.

As one of many highway travelers who would never have visited Dothan if not for its murals, Fuller became inspired to endow Burlington with a similar tourist attraction. He decided to seed an ambitious mural project on the Church Street Marketplace with a $10,000 donation.

“Robert Fuller is the visionary behind this whole thing,” says Québec artist Pierre Hardy, who is now nearing completion of the trompe l’oeil extravaganza that will transform the alleyway alongside Banana Republic leading to the Marketplace parking garage. Fuller invested in Hardy’s mural, titled “Everyone Loves a Parade!,” at a point when the project’s overseers were having trouble persuading sponsors to cover its $80,000 cost.

“It was really hard to present it to people without them seeing what it actually looked like,” says Church Street Marketplace director Ron Redmond. “It wasn’t until January, when you could see clearly what Pierre was doing, that people got it.” The fundraising goal has now been reached, Redmond reports.

Hardy has also included a few famous figures not known to have ever visited Vermont. Abe Lincoln, for example, is shown waving from a window because, the artist explains, Vermont was the first state to abolish slavery. OK, but what about Elvis? What’s the King doing here? “It’s a parade!” Hardy responds. “Something like this has to be whimsical.”

The bearded, 50-year-old artist graciously hosts visitors to the makeshift studio where he and two Vermont assistants, Ethan Miller and Mary Vittum, are working to complete a project that began eight months ago. Hardy clearly takes pride in his creation, but he acknowledges an undercurrent of anxiety, as well.

“It’s been a very complex project,” Hardy says. “The emotions and reactions along the way have been very intense.”

That’s partly because he’s had to find ways to add several individual likenesses at the behest of the Church Street Marketplace. For $2500, a sponsor gets a “full body image presence” in the parade, while it costs $7500 to have a storefront and its logo included in the tableau. Due in large part to the constant updating, the dedication of the finished 124-foot-by-16-foot mural has been pushed back from May to some time in June … or maybe July.

“It’s like we’ve been building a plane at the same time we’ve been flying it,” Redmond comments.

In addition to continually revamping the mural, Hardy has had to cope with the dislocation of living in the Courtyard Marriott hotel on Battery Street since September. “It’s taken a lot of adapting,” he admits. But Hardy’s affable manner has also helped him make friends with several hotel employees, whom he has painted into the mural.

With all the commercial signs Hardy is obliged to incorporate, some critics might view “Everyone Loves a Parade!” more as a cheesy billboard than as a playful work of public art. The artist is confident, however, that the mural’s celebratory spirit will prevail over the presence of brand names.

Having created murals in the Dominican Republic and Lebanon, as well as several sites in Canada, Hardy has built a reputation over the past 28 years as a skillful painter who doesn’t compromise on essentials. His insistence on maintaining artistic control prevents him from taking on private residential commissions, he points out. “A homeowner would have to agree to all my conditions, and that’s not easy to do,” Hardy says.

A marketplace committee chose him for the Burlington mural project in a 2009 competition that drew entries from 15 artists in Canada, France and the United States. Part of the deal is that Hardy will engineer his work to endure for at least 20 years with only occasional touch-ups. The acrylics and high-tech exterior house paint he applies on industrial-grade plywood will be coated to guard against fading from sunlight and to allow easy removal of graffiti.

The unveiling will occur during the Marketplace’s 30th anniversary year. It’s time for the freshening up that Hardy’s work will provide, Fuller says, and notes that most U.S. downtowns that established pedestrian shopping streets during the past three decades have been unable to sustain those initiatives. “Church Street has been hugely successful, but you have to keep renewing it,” he declares.

Fuller has further ambitions for downtown Burlington that are about as large in scale as “Everyone Loves a Parade!” He sees Hardy’s mural as the first of half a dozen he hopes will be installed in the Queen City, eventually making it as well known for its wall paintings as is Dothan, Ala. 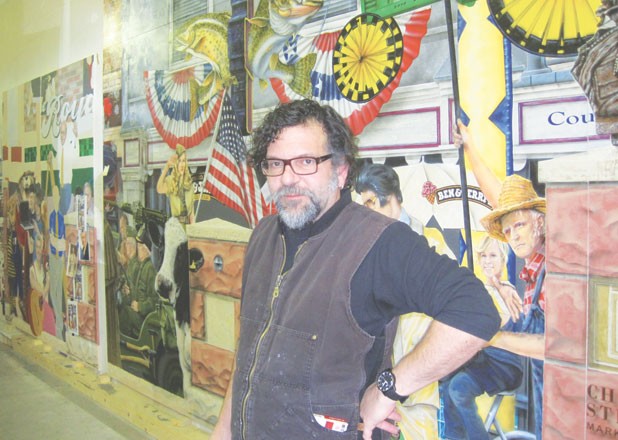