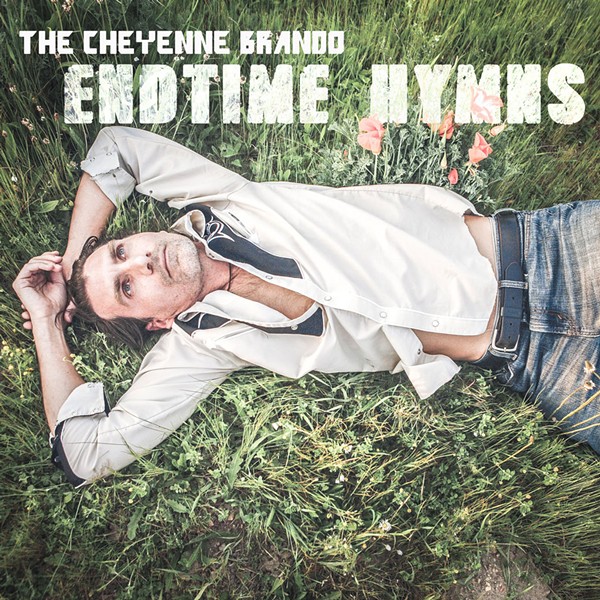 Nostalgia reigns supreme on the Cheyenne Brando's Endtime Hymns. The 10-track collection of '80s-inspired rock comes from Christian Hahn, a Braintree-based former New Yorker. His album looks mainly to the jet-black strains of the Cure and Joy Division for stylistic inspiration, but it also infuses the grandeur of U2.

Hahn teamed up with the Underground Recording Studio's Vincent Freeman, who mixed and mastered the album. Beneath the songs' enthralling retro sheen are themes of addiction, romance and philosophical musing. Hahn's writing is dire, like love letters from someone who believes their next words may be their last. His songs are rich with descriptive language, often creeping into balladry, bundled with reverb-steeped production featuring thick drums and a Technicolor spectrum of electric guitar tones.

"Samsonite," surely the album's breakaway single if its creator had dropped a track or two prior to its release, pulls off a neat trick. Not only does the tune sound remarkably like its influences with staggering bass lines and a raging river of guitars, it tells a story of two goth lovers finding themselves in the late '80s and early '90s.

Though its pop structure is sound, the song perhaps goes a bit too far, name-checking Robert Smith, the Violent Femmes and a borrowed phrase, "Love will tear us apart," before concluding. Listeners should be able to tell where Hahn's affections lie without hearing them literally named.

"Poisonhead" marks an arresting moment midway through. A dark, rounded bass line pulses under Hahn's sedate declaration, "I'm on a manic upswing / Be sure to catch me when I fall." On the contrary, he sounds strung out, as if the distance between up and down weren't that far. Clicks and snaps usher in an envelope of feathery noise, which in turn heralds wet, double-time beats.

Another gem, "Happiest Man Alive," again fakes out the listener with a hopeful title — sort of. Propulsive snares and hi-hats give the tune a bit of pep, but they collide with a despondent piano line, dreamy electronic soundscapes and smoldering guitar. The singer refers to himself as "the happiest man alive" despite feeling like the Biblical character Job.

Hahn's love for '80s music and lyrical fearlessness make for an engaging combination. Though Endtime Hymns may prove too much for some listeners, its indisputable pop craftsmanship should win over lovers of the era and newcomers alike.

Endtime Hymns is available at thecheyennebrando.bandcamp.com.

Candidates File for Vermont Races Ahead of Thursday's Deadline