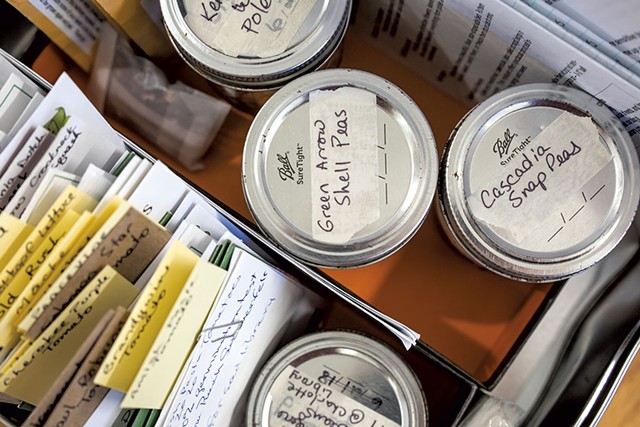 In a corner of the recently expanded Charlotte Library, a two-drawer card catalog sits on a mustard-yellow floral tablecloth. But instead of old-school index cards listing books, its drawers hold small paper envelopes of old-school seeds with evocative names such as Dragon Langerie bush bean, Brandywine tomato and Corno di Toro (horn of the bull) pepper.

There is no fee for the seeds, just as there is no fee to borrow books. Library patrons are encouraged to take what they would like to grow in their gardens. (This year, due to the pandemic, patrons request seeds in advance and pick them up in the library vestibule.) Ideally, participants "return" their seeds at the end of the season in the form of seeds saved from the plants they grew.

Linda Hamilton is the seed library's co-coordinator. The connection between a town library and a seed library is not obvious to everyone, she acknowledged during a recent conversation.

Charlotte's seed library opened in 2013 but was dormant by 2017, when Hamilton volunteered to reinvigorate it. She has since been joined by fellow Charlotte resident and volunteer Karen Tuininga, a certified master gardener. The pair has expanded the library and its associated programming with the support of library director Margaret Woodruff.

A seed library is a collection of seeds, Hamilton explained, just as traditional libraries are collections of books and other sources of information. To Woodruff, it makes all the sense in the world: "Seeds contain information, too," she said.

"It's all right there," Tuininga said, gesturing at a handful of magenta-striated tan beans scattered on the tablecloth. "It's mind-boggling when you see how tiny the seeds are, and then they burst forth with so much life."

The Charlotte Library is one of an estimated dozen around Vermont that host a seed library. That figure comes from a University of Vermont student research project done last year under the supervision of Daniel Tobin, assistant professor of community development and applied economics. 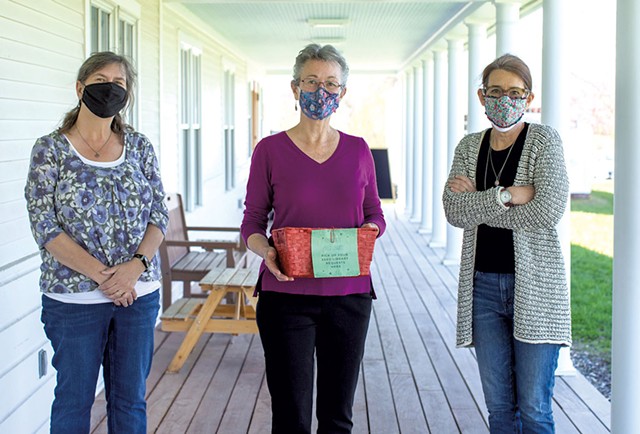 Tobin is working on a larger research project on seed systems in New England. "What I'm really interested in is alternative seed systems to the highly corporate, consolidated seed system and how we can maintain genetic diversity of our crops," he said.

Seed libraries like the one in Charlotte can contribute to this goal. "It's super cool to put [seeds] in the public library," Tobin said. "It takes seeds and puts them in the public sphere."

In Charlotte, the seed library team works to educate the public on everything from garden design to cooking, with an emphasis on heirloom seeds. Last year, Hamilton did a parking lot demo of canning dilly beans. "We're trying to tickle people's interest in different ways," she said.

The library is midway through a virtual series featuring the latest book by Manchester-based garden designer and author Ellen Ecker Ogden, The New Heirloom Garden: Designs, Recipes, and Heirloom Plants for Cooks Who Love to Garden. Ogden will speak at the second online session on April 23 (see below).

The first session, on April 16, drew about 10 experienced and novice gardeners. Tuininga began the virtual discussion with a definition of "heirloom" as the word relates to plants and seeds.

Unlike a grandparent's heirloom steamer trunk, she noted, garden heirlooms provide a view into both past and future. Often, they come with stories of a particular family or community that preserved the variety. Then, after the growing season, "you can save seeds from those plants, and [if you plant those seeds the following year,] you'll get a plant pretty much like what you started with."

This is not true of all seeds, Tuininga continued. Many commercially available seeds are hybrids, which have been purposely crossbred by large seed companies for specific traits and whose saved seed will not reproduce the same plant.

Tuininga illustrated her point with the example of Sungold versus Brandywine tomatoes. Both are delicious, she acknowledged, but Sungold is a proprietary hybrid whose seeds will not reliably grow another Sungold plant, which means you must repurchase the seed every year.

In contrast, the Brandywine tomato, which is among the three dozen-plus varieties at Charlotte's seed library, is an heirloom and is open-pollinated. Its saved seeds will grow another Brandywine plant.

For centuries, Hamilton told Seven Days, people saved their own seed because they had little choice. That changed after what she called "the post-World War II era of commercializing seed and commodifying food." Although commercial hybrid seed production has reduced the workload for gardeners and farmers and created popular new varieties, it has decreased seed diversity and made people reliant on big seed companies.

That cost was brought home to Hamilton when a favorite heirloom tomato called Lillian's Yellow disappeared from seed catalogs.

Public seed libraries aim to put the power of seeds back in the hands of everyone. "We are trying to increase understanding of the value of tried-and-true varieties," Tuininga said, "[to] keep those alive in the community, so we are not dependent on commercial seed."

There are hurdles to overcome. The UVM research team found that seed libraries tend to lack dedicated funding and rely on volunteers who, while committed, cannot do everything. In particular, "saving seeds can be tricky," Tuininga noted.

Many libraries, including Charlotte's, currently depend on donations of seed from regional seed companies that focus on heirloom varieties. By educating the public on seed saving, they could open up more opportunities to replenish their stock with locally grown seed.

To further those education efforts, Tobin successfully applied for a $5,341 City Market Co-op Seedling Grant to fund workshops at seed libraries in Charlotte, Jericho, Montpelier, Brandon, Barton and Stamford. The fall 2021 program will be developed by Sylvia Davatz of Hartland, "a nationally renowned seed saver," according to Tobin.

The Charlotte Library team is excited to host a workshop. While its members appreciate the specialty seed companies from which they draw much of their stock, they hope to move beyond them.

"We have a sort of five-year plan that more of our seed will be maintained and stewarded by our community," Tuininga said.

With a nod to the card catalog, Hamilton said, "My goal is that the little cabinet will hold local favorites." 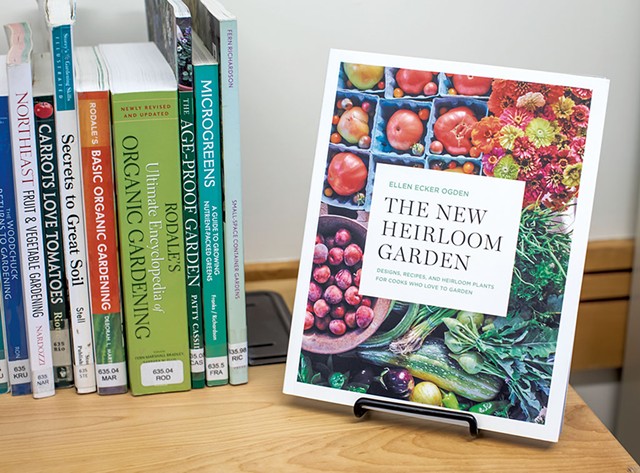 With her fifth solo book, The New Heirloom Garden: Designs, Recipes, and Heirloom Plants for Cooks Who Love to Garden, Ellen Ecker Ogden of Manchester makes the compelling case that heirloom varieties are worth the attention of gardeners and eaters alike.

In support of that thesis, she offers charming garden designs, gorgeous fruit and vegetable photographs, and 50 mouthwatering recipes. Heirloom open-pollinated seeds, Ogden writes, are a "way of continuing the cycle of life and a guarantee that there will be another garden the following season."

Find her recipe for Rhubarb Pie With Ginger and Lemon here.

Ogden will speak at an online event hosted by the Charlotte Seed Library on April 23. She chatted with Seven Days by phone.

SEVEN DAYS: What made you decide to write a book devoted to heirloom gardening and cooking?

ELLEN ECKER OGDEN: When I thought of heirlooms, it was usually in relation to something old and dusty. [But then] there was that moment that I realized I've been growing heirlooms. Why do I like them? One of the reasons I liked them is because I can save the seed, and I'm quite fascinated by the way seed looks and the way it grows inside the pods.

There is the diversity angle that to me is also really important. And flavor, too. When we had The Cook's Garden seed catalog [a specialty catalog Ogden cofounded with her former husband], really what we focused on were the most flavorful varieties. We'd do tasting trials with 50 different types of tomatoes and 12 different kinds of beans or carrots. It was always the heirloom varieties that really, clearly had the most flavor.

SD: Your book features many specific varieties. Do you have a few favorites you could share?

EEO: I love my Italian purple pole beans, the Trionfo Violetto. I like pole beans over bush beans because they don't take up as much space in the garden, and they're very dramatic and tall. They come in close first place with another Italian heirloom called Anellino, which is a curly, cute little bean. You'll never see it in the market, but I tell you, it is really delicious.

I have a particular affection for red deer-tongue lettuce. Another is the husk cherry, also called ground cherry or golden tomatillo. The seed is tiny, and it's like a tomato, very tender. But if you can get a plant going, you're going to get a really nice harvest, and they have that butterscotch-pineapple flavor.

SD: Why save seeds?

EEO: To be able to take one seed, a single seed, and put it in the ground, and that seed will grow a plant that will produce a hundred seeds. I mean, it's better than money in the bank. You can give the seeds away to friends. You have enough for next year's garden. It's an extraordinary sense of satisfaction to be able to grow a garden from seed to seed. Why would we be paying $4 a packet for something we can grow for free?

I was so pleased when the Charlotte Library reached out to me. I hope [it represents] a trend. We need to educate people on how to start from seed, how to grow seeds and how to store seeds. There are so many exciting varieties that we're going to lose if we don't start saving seeds.