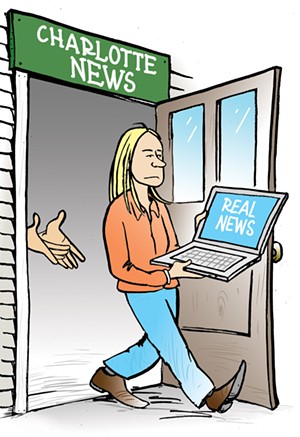 Charlotte, an affluent community of nearly 3,800 at the southern edge of Chittenden County, has been an anomaly, bucking the trend of towns becoming news deserts. It is served by two local newspapers, the biweekly Charlotte News and the weekly Citizen. The interest in news may be natural for a town that has become home to a number of national journalists, including New Yorker contributing writer Adam Davidson and former foreign correspondent Christina Asquith.

The Charlotte News is a homegrown nonprofit, supported by local fundraising and governed by a board of directors that has included some of those experienced writers and editors. But recently there's been trouble in journalistic paradise.

It's come to a head with what some see as the forced resignation of the paper's widely respected editor and lone paid staffer, followed by the volunteer publisher's departure and the resignations of four people who shared two seats on the board.

Chea Waters Evans, who spent much of her youth in Charlotte, said in an interview that she considered being the Charlotte News' editor a "dream job." She said she had gotten excellent feedback and employee reviews from her bosses. But things changed, she said, after she wrote stories in late 2020 that raised questions about conflicts of interest involving town officials.

On October 29, Evans reported, "A conflict that crosses board boundaries in town has ignited planning and zoning, personnel, and public meeting conflicts. The issues center around an application considered two weeks ago by the Zoning Board of Adjustment (ZBA)."

In a December 3 story, headlined "What's going on with the zoning administrator? Town officials won't say," Evans wrote about her battles to obtain information on a reprimand issued by town officials against Zoning Administrator Daniel Morgan, as well as a grievance he filed against the town.

In other words, it was tough, no-nonsense journalism, with some of the sharpest scrutiny directed at the ZBA.

The last story Evans wrote for the Charlotte News, published March 11, was headlined "It's inevitable: Conflict of interest in a small town" and contained this nugget: "The publisher of this newspaper is the spouse of a member of the ZBA."

She was referring to Claudia Marshall, herself a former journalist at ABC News and CBS News and spouse of ZBA member Matt Zucker.

Marshall met with Evans shortly before her final story was published and told her there was growing dissatisfaction with her on the paper's board, Evans said. "I was never explicitly told ... 'Don't report this' or 'Don't write about this,'" she said. Marshall's "indications to me was that the board was looking for something that I wasn't quite providing. I'm unclear exactly what it was ... It just seemed like it was time to go ... If this isn't working out, this is a lot of hard work that maybe could be channeled elsewhere."

Did a conflict of interest come into play when Marshall pushed for a change in direction after critical stories about the ZBA?

Marshall — who resigned her unpaid position as publisher shortly after Evans' departure — told Fair Game that her husband's position on the ZBA did not influence her handling of Evans' reporting. "I never pushed for any changes in any of Chea's articles," Marshall said in an email, adding that the paper disclosed her marriage to Zucker at the end of each story about the ZBA.

Davidson, the New Yorker contributor, was one of the four journalists who resigned from the Charlotte News' board in protest after Evans submitted her resignation and the board voted not to offer her the job back. Both Davidson and Asquith said Marshall was adamant in the key board meeting that Evans needed to go.

"I was in the meetings where the decision was made to get rid of Chea," Davidson said. "The process was so rushed. It was almost like there was this frenzy to get rid of her." He added that he and the other journalists on the board strongly disagreed with that decision. "Essentially, she was too independent," he said of Evans.

Asquith had a similar take. "I think there are two visions for the Charlotte News," she told Fair Game. "One is that there's a warm body in the editor's chair who collects contributions from members of the community about the seasons changing or whatever else and attends [public] meetings as a stenographer. And there's a different version of the Charlotte News ... And that is, there's a journalist in that chair, with more than a decade of experience, who's deeply sourced, balanced and dogged. And that kind of person can make people uncomfortable. But, ultimately, a great journalist covering Charlotte is a positive thing for all of us, and it's very clearly what people in the town are saying that they want."

John Quinney, a two-year board member who is the paper's current interim president and publisher, said he could not discuss a personnel matter. But he did say something telling after Fair Game asked whether it might be a conflict of interest for someone overseeing the paper to be romantically involved with or married to a person the paper is covering.

"We don't have a policy for how those things should be handled," Quinney said.

He added, "We have an editorial committee, and that committee is going to work over the next couple of months to look at these issues of conflict of interest, best practices, roles and responsibilities, the structure of the organization." Quinney also noted that the paper has hired a new editor, Kim MacQueen.

Seven Days had a written policy in place while Tim Ashe, the domestic partner of publisher and coeditor Paula Routly, was president pro tempore of the Vermont Senate. Routly was barred from editing or assigning political stories during his tenure, and the paper disclosed the relationship at the end of articles that included Ashe. He is no longer in public office, and the policy is no longer in place.

Working on a conflict-of-interest policy is a good move, but it looks like it comes a bit too late for Evans. And let's hope there's at least one lesson taken from all this: If you want tough coverage of town government, you'd better ensure the independence of a newspaper's journalists to report the news as they see it.

For the second time in a month, a senior Vermont official has apologized for remarks deemed by some to be tinged with racism or sexism. This time it was Sen. Joe Benning (R-Caledonia) who used the phrase "difficult cakewalk" during a March 16 Senate debate over vote-by-mail legislation.

Benning apologized the following day for the remark. "While that word may seem neutral to some, I have learned that, in fact, it is something with very racist origins," he said. "I am committed to learning, on my own, the origins of our words, to not be defensive, to be accountable and to do better."

Last month, Public Safety Commissioner Michael Schirling also made a public apology after he used the word "uppity" to describe an exchange with a younger, female lawmaker during a legislative committee meeting. Schirling said he did not know the word historically had been used to demean Black people and women. I chastised Schirling in this space, saying that the man who oversees the Vermont State Police should be aware that a word such as "uppity" invokes the power differential too often at the center of police brutality and civil rights violations.

The origins of "cakewalk" are also ugly. Black slaves were required to perform the difficult, high-stepping march-dance to entertain their white owners before the Civil War, and the performances continued into the early 20th century. Those declared the best performers were given cake.

I was skeptical when Schirling said he did not know the history of "uppity." Now I'm starting to wonder whether such gaps in knowledge aren't more common than I suspected. Maybe Benning, a Lyndon State College (now Northern Vermont University-Lyndon) graduate, was genuinely unfamiliar with the yearslong struggle to rid the University of Vermont of its annual Kake Walk celebration, held as recently as 1969 on the Burlington campus. At UVM, fraternity brothers appeared in blackface and performed the competitive dance to the tune "Cotton Babes."

A 2019 retrospective by Seven Days' Derek Brouwer reported that the event, unthinkable today, was so widely accepted that the Friday of Kake Walk weekend was a campus holiday. Local and state officials handed out trophies. Then-governor Phil Hoff attended more than once, and he was regarded nationally as a champion of civil rights.

Fast-forward half a century, and words like "cakewalk" will jump out to bite us every now and then.

Take "grandfathered," for another example, a word often used in Vermont and elsewhere to describe exceptions to current state laws and local ordinances for practices that predate those laws. As NPR reported in 2013, Southern states included such clauses in Reconstruction-era laws that used literacy tests to keep Black people from voting. But if your grandfather voted — in other words, if you were white — you could vote, too.

Before anybody runs off calling this woke culture run amok, reflect on the fact that minor changes in our vocabulary are baby steps toward correcting past wrongs.

VTDigger.org is bringing on three new editors and a staff lawyer, while Vermont Public Radio is making two additions to the team behind its "Brave Little State" podcast.

Over at VPR, singer-songwriter and journalist Myra Flynn, a Vermonter just back from working for eight years in the music business in Los Angeles, and Josh Crane, a Middlebury College graduate and podcast producer at public radio station WBUR in Boston, will join the team responsible for "Brave Little State," which asks listeners to suggest topics for inquiry. Angela Evancie, director of engagement journalism and executive producer of "Brave Little State," said she hopes Crane and Flynn can help VPR expand its public engagement offerings.