The Catamount Pipe Band Puts Vermont on the Bagpiping Map 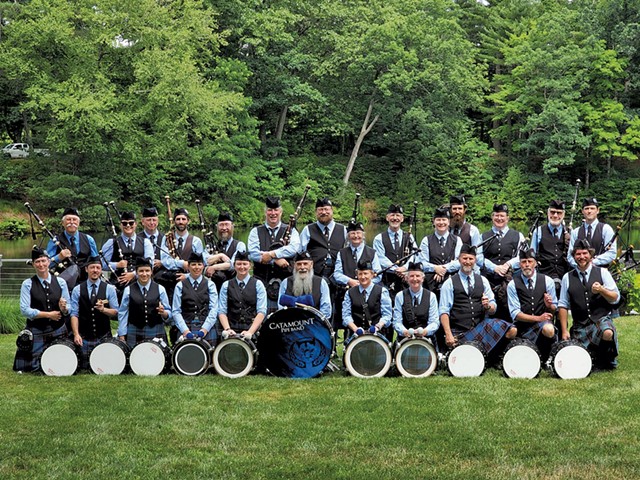 When Sheila Liming moved to Essex Junction two years ago, she had a specific need for her new place: a soundproof garage. Liming, 39, wasn't planning to bang on the drums all day or rip amplified guitar riffs — she just didn't want to bother her neighbors as she blew into her bagpipes.

Liming, who is of Scottish descent, is one of about 25 members of Montpelier's Catamount Pipe Band. Its bagpipers and drummers bested 27 ensembles on July 16 at the Glasgow Lands Scottish Festival in Northampton, Mass. — the band's first major win since before the pandemic. To celebrate, its members took a victory lap around a grassy knoll, playing the first song of their winning set: "Bonnie Hoose O' Airlie."

"When they announced us first, I think we were all quite shocked," Liming said. "But the elements came together for us as the result of the hard work we put in this spring."

Liming is relatively local compared to some members, who travel from New York, Massachusetts and even Canada to march in the Catamount Pipe Band. While many of the players perform to honor their Scottish heritage, others say they're simply intrigued by the bagpipe. Playing the instrument is as much a sport as it is an art. Band members must be in good physical shape and have excellent lung capacity.

Liming, who competed with a band in North Dakota before she moved east for a job as an associate professor of writing at Champlain College, said she shopped around the Northeast pipe band scene before joining Catamount. She liked that the band is split relatively evenly by gender, a rarity in the male-dominated world of bagpipes. She's played since she was 15 years old.

"I could tell that they were a pretty friendly and supportive group," Liming said.

That's especially important in competition. Bands are judged on their ability to play in sync; Liming explained that 15 bagpipe players should meld into a single note.

The Catamount Pipe Band regularly competes throughout the region and plays at Vermont events and parades, as well as at the World Pipe Band Championships in Scotland. Next up: The band will compete at the Quechee Scottish Games in Hartford, Vt., on Saturday, August 27.

"It's time to challenge ourselves to step up our performance before the next competition," said Iain MacHarg, the group's pipe major.