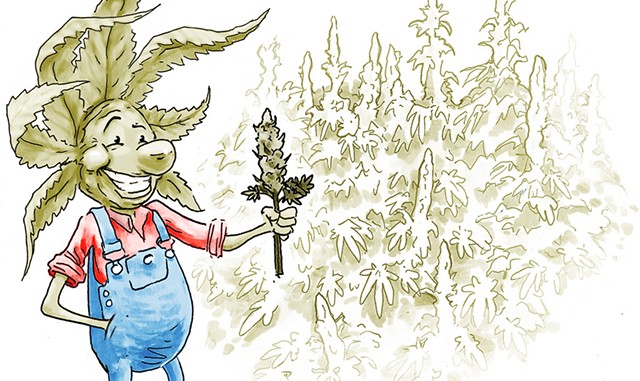 Since hitting a high of 5,662 patients on June 7, 2018, the state-run program had shed about 400 people by March 19, according to data provided by Vermont marijuana program administrator Lindsey Wells.

That means that the number of patients has wilted in the months since Vermont legalized possession and home growing of cannabis for adults as of July 1, 2018.

“We were having a very steady growth,” Wells told Seven Days. “We’re definitely not having the growth anymore.”

That’s bad news for the state’s dispensaries, which have reported a 25 percent to 30 percent drop in sales since legalization, according to Wells. Most of the purchases are of infused products, she said, because anybody can grow their own flower.

It’s also bad news for Wells and others who work at the registry because fees from the program help fund it. Dispensaries pay for about 25 percent of the registry’s budget, but the rest is supplemented by the $50 fees patients pay each year for a card, she said.

What would change things around? Wells said two bills in the legislature this session could impact the future of the program: S.54, which would legalize recreational sales of cannabis by April 2021, and S.117, which would expand the list of conditions eligible for medical marijuana, among other things.

Here are some other stories we followed over the last few weeks:
March 15: Australia is considering legalizing cannabis and has looked at using the “Vermont model" — legal possession and use of cannabis, minus the commercial market. An Aussie reporter checked in with several Vermont officials and activists, including Lt. Gov. David Zuckerman, Vermont State Police spokesperson Adam Silverman and Vermont Coalition to Regulate Marijuana director Laura Subin. [Katie Burgess, the Sydney Morning Herald]
March 18: Police in Pennsylvania were at the wheel of a bulldozer when they ran over and killed a man who was allegedly growing 10 weed plants on public land. The dead man’s family has now filed a federal lawsuit against the state police. [Michael Rubinkam, Associated Press]
March 20: Castleton University is the latest institution of higher learning to add cannabis courses. The school will start offering the 12-credit certificate program this summer. [Sasha Goldstein, Seven Days]
March 21: TreTap has released its first CBD-infused maple water beverage. Cans of tangerine-turmeric drink are available in Ceres stores across Vermont. [Bevnet]
March 21: Energy utilities are encouraging Vermont’s weed growers to try different techniques and use energy-efficient bulbs and equipment to reduce the carbon footprint of cannabis. [Evan Johnson, Heady Vermont]
March 23: Brookline is home to the first cannabis dispensary in the greater Boston area. [Quincy Walters, WBUR]
March 25: Lawmakers in New Jersey called off a vote on legalizing cannabis for adults after failing to garner enough support for the measure. It's a big blow for a state that seemed on track to legalize. [Brent Johnson, Payton Guion and Matt Arco, NJ Advance Media]
March 27: A new study found that cannabis-related hospital visits skyrocketed in Colorado after the state legalized cannabis in 2012. [Ashley May, USA Today]
March 27: CVS and rival Walgreens have each begun selling CBD products in some states. [Angelica LaVito, CNBC]
March 27: The guys who brought you the movie Pineapple Express are now getting in the weed game for real. Seth Rogen and Evan Goldberg, childhood buddies who’ve collaborated on several successful films, launched Houseplant, a Canadian recreational cannabis company. [Thomas Franck, CNBC]
March 28: Snoop Dogg’s weed is so powerful that it made Matthew McConaughey rap for 13 straight hours. The actor says Snoop slipped him a real joint while the two filmed a scene for their new movie, Beach Bum. [Bryan Hood, New York Post]
March 28: Business must be booming for the Drug Enforcement Agency in Texas. The DEA in Houston is in search of a contractor that can incinerate up to 1,000 pounds of pot per hour for a minimum of eight consecutive hours per day. That’s a big burn. [Jaime E. Galvan, KHOU-TV]
March 29: Federal authorities in Vermont have charged three people, including a man who allegedly sold pot out of a Church Street business, with witness tampering. Derek Spilman, his mother and his nephew allegedly tried to get someone to admit to smearing dog shit on the door of a neighboring business — something the feds say Spilman actually did to intimidate the business owner, who's a witness in the original case. Things are getting messy... [Cat Viglienzoni, WCAX-TV]
March 29: Cops in Georgia busted former NBA big man (and former No. 1 overall draft pick) Kwame Brown for possessing a bunch of weed and weed edibles. [TMZ]