The Cannabis Catch-Up: Stories This Week From Around the Web 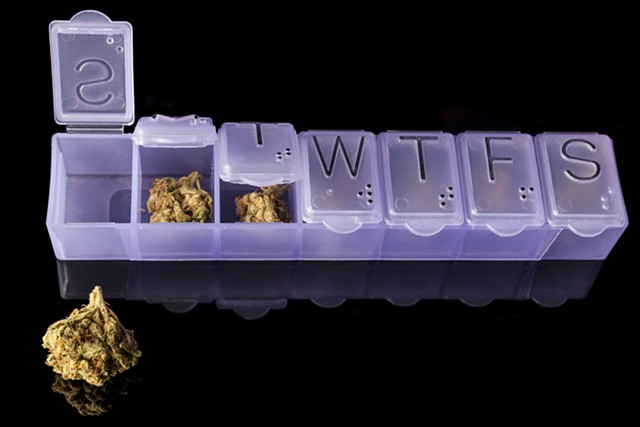 Welcome to the Cannabis Catch-Up! Seven Days wants to keep you up on the latest cannabis news from around the country. Every Friday, we’ll round up our favorite stories from the week that was.

The biggest news this week came Wednesday, when the Los Angeles City Council approved recreational marijuana sales. While cannabis has been legal in California since voters passed Proposition 64 last year, the decision this week makes Los Angeles the biggest city in the country to allow recreational marijuana sales. With nearly 4 million people, the city’s population is more than six times as large as Vermont's.

“Under the Los Angeles regulations, residential neighborhoods would be largely off-limits to pot businesses, and buffer zones would be set up around schools, libraries and parks,” the Associated Press reported.

Because this is the first “Cannabis Catch Up,” we're including stories from beyond just this week. Here’s what we've been reading:
November 21: California regulations will ban the delivery of marijuana by bicycle. “Car and truck deliveries are legal; bicycles are not,” reports Modern Farmer.

That seems like a strange distinction to make. [Modern Farmer, Dan Nosowitz]
November 29: Remember how Green Mountain State producers got all bent out of shape if someone labeled something as “Vermont” — even if it wasn’t from the Green Mountain State? It happens frequently with maple syrup, cheese, milk and — of course — with beer. In March, Hill Farmstead’s Shaun Hill called out a California brewery for selling a “Vermont Farmhouse Ale.”

Well guess what — the same thing is happening with cannabis:

‘The State of California is introducing a new challenge in marijuana monitoring: honest labeling regarding your pot's county of origin,” writes Amanda Chicago Lewis in her Rolling Stone story, “Inside the Battle to Accurately Label Pot.” “Pretty soon it will be illegal for operators to say that their cannabis was grown somewhere it wasn't. That's right — appellations are coming to California cannabis.” [Rolling Stone, Amanda Chicago Lewis]
December 6: After revelations that drivers involved in two recent notorious Vermont crashes had THC in their systems, our own Molly Walsh dove into the debate about driving-while-high statistics. Will concerns over an increase in stoned motorists hinder the legalization push? [Seven Days, Molly Walsh]
December 6: The founder of a cannabis-testing lab in Oregon will step aside and sell her company after a local antifa group accused her of having neo-Nazi ties. [Oregonian, Noelle Crombie]
December 6: Massachusetts is readying for legal cannabis sales in July and if projections are correct, the state would have a lot of extra cash rolling in. The commissioner of revenue told lawmakers Wednesday that weed sales could generate some $82 million in tax revenue, State House News Service reports. [Greenfield Recorder/State House News Service, Colin A. Young]
December 6: More news from Massachusetts. State regulators are considering creating “cannabis clubs” where adults could legally buy — and consume — marijuana, reports State House News Service.

The basic idea of onsite social consumption is to allow adults to purchase a marijuana product and use it in the same location, much like purchasing alcohol at a bar or a cigar at a cigar bar. Allowing onsite consumption would provide legal locations for tourists staying in hotels and renters who are prohibited from smoking in their apartments to consume marijuana. They could also give parents a place to smoke or consume marijuana without ever bringing it around their children, officials also said.

[Telegram/State House News Service, Colin A. Young]
December 6: There’s a lot to unpack in this one, so bear with us. A Long Island woman showed up to court Monday to answer a summons for marijuana possession. While talking on her cell phone (and driving), she cut off police officers in an unmarked car. She then maneuvered her Jeep into the police chief’s parking spot (marked with a sign reading “Police Vehicles Only”).

Cops approached and asked her to roll down the window, according to an account in Newsday. Aannnd … marijuana smoke reportedly billowed from the car.

“People don’t believe you when you tell them things that happen on the job,” Northport Police Chief Bill Ricca told the newspaper. “But, seriously, you can’t make it up.” [Newsday, John Valenti]
#FlashbackFriday! This is an oldie but goodie from November 2016. It’s a recipe — pot pumpkin pie! Create some canna-butter and you’ve got a delicious dessert for your holiday party.  [Willamette Week, Laurie Wolf]
From May: A new breed of stoner is cropping up in California, according to Vogue. And — they like to exercise! Take it away:

A group of lithe twenty-somethings clad in the kind of spandex that doesn’t leave much room for snacking gathered on a rooftop in the shadow of the Hollywood hills to practice yoga, and get high.

“Let’s all take a puff,” said Equinox yoga instructor Derek Beres to the students at the beginning of class. In unison, they inhaled from vape pens by Bloom Farms, a San Francisco–based medical marijuana company that also sells pre-rolled joints, and settled into mountain pose.

Got a story you want to see run in our our weekly roundup? Send an email to cannabeat@sevendaysvt.com