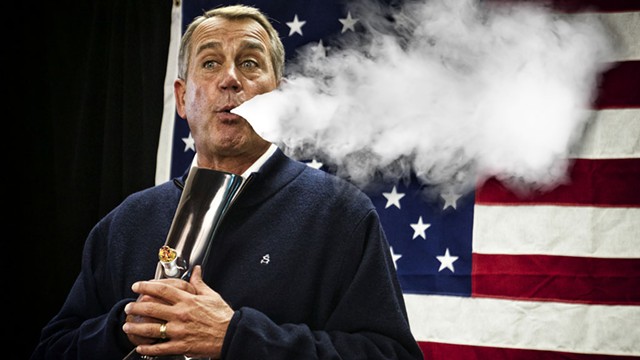 We’ve previously documented that former football players, among others, are getting involved in the legal cannabis market.

On Wednesday, a cannabis company put this statement out in a press release: “Acreage Holdings, one of the nation’s largest, multi-state actively-managed cannabis corporations, announced the appointments of former Speaker of the United States House of Representatives John Boehner and former Governor of the State of Massachusetts Bill Weld to its Board of Advisors.”

Sure, Weld is no surprise. He ran in 2016 for vice president on the Libertarian ticket and supported legalized medical cannabis in the 1990s while he was governor of Massachusetts, where recreational weed now happens to be legal.

Boehner, though, is another story. The Ohio Republican and former U.S.  House speaker told a constituent in 2011 that he’s “unalterably opposed” to the legalization of cannabis and reiterated that stance as recently as September 2015.

But on Wednesday, Boehner tweeted the Acreage press release, along with a note that said his “thinking on cannabis has evolved."

I’m joining the board of #AcreageHoldings because my thinking on cannabis has evolved. I’m convinced de-scheduling the drug is needed so we can do research, help our veterans, and reverse the opioid epidemic ravaging our communities. @AcreageCannabis https://t.co/f5i9KcQD0W

One has to wonder if Boehner was also dreaming of dollar signs as he typed up that tweet. Nothing like the allure of some quick cash to speed along the evolution of your views.

Here are some other cannabis stories we followed this week:
April 9: A Kentucky-based hemp company has purchased a Middlebury food-processing facility as part of an expansion into the Northeast. [Sasha Goldstein,  Seven Days]
April 11: More on politicians and weed! Cynthia Nixon, aka Miranda from “Sex and the City,” is mounting a run against Andrew Cuomo for New York governor. This week, she announced her support for a taxed-and-regulated legal cannabis market as “a key front in the racist war on drugs.” She followed that up by soliciting donations of $4.20 — get it? [Jimmy Vielkind, Politico New York]

April 11: File this one in the “Not the Onion” category. Eight Argentinian cops were fired after officials discovered half a ton of cannabis was missing from a police impound warehouse. Their excuse? The mice ate it. Seriously. [Uki Goñi, the Guardian]
April 12: Wanna grow your own weed in Vermont come July 1? Here’s a handy list of classes, kits and gardening centers that can get you on your way to weed heaven. [Nicole Higgins DeSmet, Burlington Free Press]
April 12: A new Colorado study found that people employed in the restaurant and hotel industries smoke the most weed. Next on the list were the  people working in arts, entertainment and recreation fields. [Maggie Fox, NBC News]
April 12: The World Medical Cannabis Conference & Expo began Thursday in Pittsburgh and runs through the weekend. Among the scheduled speakers is “Freeway” Rick Ross, the notorious Los Angeles drug trafficker who ruled the cocaine trade during the 1980s. He was released from prison in 2009 and is an author who travels the country for speaking engagements. [Colin Deppen, The Incline]
April 13: Singer Melissa Etheridge and artist Ron English will make appearances at the International Church of Cannabis in Denver on 4/20. It’s the one-year anniversary for the church, where congregants practice Elevationism. [Thomas Mitchell, Westword]
April 13: Holy shit! The Canadian government is planning to track its residents' cannabis use by taking sewage samples in six cities across the country — inculding Montréal. [Menaka Wilhelm, National Public Radio]