The Cannabis Catch-Up: Does This Vermont Weed Bill Stand a Chance? 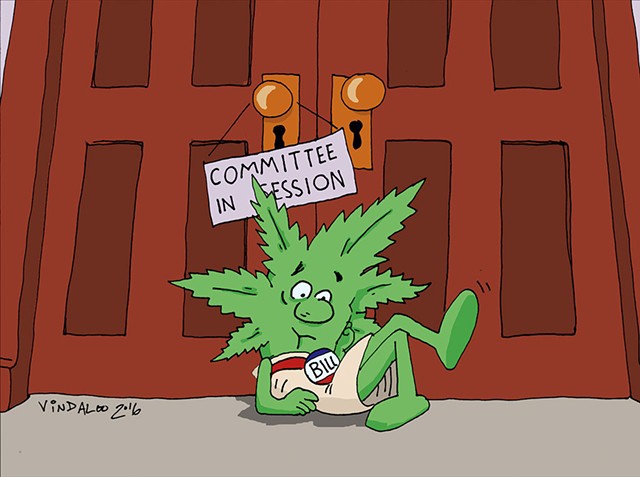 The Vermont Senate sure acted fast.

Just a few weeks into the session, there’s a new bill under consideration to tax and regulate cannabis in the state. Under the timeline laid out in S.54, retailers would get their licenses by April 2021 — meaning legally sold buds are probably at least two years away. Fifteen of Vermont's 30 senators are listed as sponsors of the bill.

The measure would create a five-member cannabis control board, effective July 1, that would oversee the industry and help implement regulations. Towns, too, would have the option to create local regulations — or ban cannabis businesses outright.

The law would create five different licenses, for cultivators, wholesalers, product manufacturers, retailers and testing laboratories. Sales would be subject to a 10 percent excise tax, in addition to the 6 percent Vermont sales tax. Municipalities could add a local option tax of up to 1 percent.

Another interesting sign of the times? The legislation calls for all mentions of marijuana in state statute to be changed to cannabis, the actual scientific name of the plant.

The bill is currently before the Senate Judiciary Committee, which took testimony from various officials and advocates this week. One ardent supporter was Attorney General T.J. Donovan, who insisted before the committee on Thursday that “we have to have a regulated market.” It was the AG’s first outright call for full legalization, though he had supported last year’s bill that allowed for adult cannabis possession, cultivation and use.

“We’ve seen that we can’t tell Vermonters that they can possess marijuana and be silent about how to obtain it because capitalism exists and is only going to grow in this area,” Donovan said.

“We already have the problem,” Levine said, of youth use. “It’s not like taxing and regulating this makes the problem go away.”

Levine isn’t the only one who wants something before the bill goes forward. Gov. Phil Scott has made it clear that he wants a better way to detect drugged drivers. Earlier this week, Sen. Dick Sears (D-Bennington) told Vermont Public Radio that the bill doesn’t address driver impairment because he believes that’s a separate issue from the tax-and-regulate legislation.

Scott didn’t specifically address the issue this week, though his office did respond to Levine’s proposal. According to spokesperson Rebecca Kelley, the governor has “been consistent in calling for a clear plan on education and prevention initiatives that need to go along with a regulatory market, which includes a plan for funding.”

The bill is likely to move quickly through the Senate.

Here’s what else we read this week:
January 28: A California doctor lost his license this month because he recommended a man give his 5-year-old son weed-laced cookies to control the boy’s behavior problems and temper tantrums. [Salvador Hernandez, BuzzFeed News]
January 29: A growing number of prosecutors in big cities are no longer pursuing cannabis possession cases. The latest is Baltimore, where Marilyn Mosby said on Tuesday that she’d no longer bother with prosecuting that crime. [Shaila Dewan, New York Times]
January 29: In search of a way to funnel business into California’s legitimate cannabis market, lawmakers there have introduced legislation that would reduced taxes on the drug. The black market in the Golden State has continued to thrive, even a year after full legalization. [Alyson Martin, Cannabis Wire]
January 29: The owner of  Good Times Gallery, a head shop on Burlington’s Church Street, was openly selling weed just feet from city hall. Federal and local police raided the shop on Tuesday and arrested Derek Spilman. [Paul Heintz, Seven Days]
January 30: Spilman appeared in federal court on charges of possessing a handgun while distributing marijuana. According to an affidavit, Spilman sold weed-laced gummies to a girl who got sick from eating them. [Paul Heintz, Seven Days]
January 30: Los Angeles hosted a three-day 2019 North American Cannabis summit this week, featuring — among others — public health officials, researchers and policy makers. Check out these dispatches from the event. [Julia Barajas, Cannabis Wire]
January 30: New Vermont House Minority Leader Pattie McCoy (R-Poultney) opposed last year's bill that allowed adults to grow, consume and possess pot. But she says she has an open mind about this year's proposal to tax and regulate weed. Could that help get the measure through the House? [Taylor Dobbs, Seven Days]
February 1: Weed is legal in Massachusetts but that doesn’t mean you can’t be fired for using it. That’s the hard truth one woman learned after she was tested for drug use following a fall at work that broke her wrist and elbow. Bernadette Coughlin said she wasn’t high at the time but had pot in her system. Could proposed legislation have saved her job? [Josh Wood, the Guardian] February 1: Canadian weed companies are scrambling to get their hands on edgy stock ticker symbols. The one they all crave now? POT. Weed companies will hold a lottery to determine which one gets the sought-after symbol. [Safehaven, NASDAQ]