The Cannabis Catch-Up: A Tiger, Mike Tyson and Weed 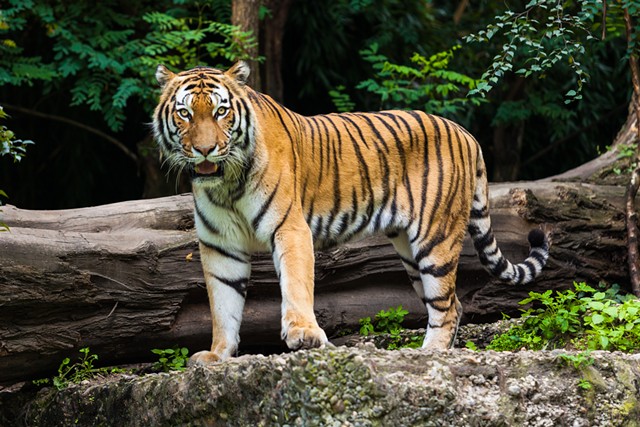 There were plenty of weird weed stories this week, but there’s one out of Texas that takes the cake.

Someone entered an abandoned home in Houston to smoke pot — and found a caged tiger inside. Seriously. The dispatcher who answered the call was, well, pretty incredulous.

“We questioned them as to whether they were under the effects of the drugs or they actually saw a tiger,” Sgt. Jason Alderete of the Houston Police Department told KTRK-TV. “They saw a tiger in this building, this vacant house that's obviously been abandoned for some time."

The 2-year-old big cat weighed 350 pounds and had feasted on meat the rescuers discovered inside the ramshackle house. Crews tranquilized the tiger and moved it to the Cleveland Amory Black Beauty Ranch outside of Dallas. It’s nicknamed “Tyson” after Mike Tyson, who had a memorable cameo involving a tiger in 2009’s The Hangover.

No word if the pot-smoking tiger whisperer will earn a reward for his or her find.

Here are some other stories we followed this week:
February 11: Following weed legalization in Massachusetts, animal hospitals are seeing more and more cases of pets that have consumed cannabis. No reports of any stoned tigers just yet … [Eli Sherman, Wicked Local]
February 11: Speaking of Mike Tyson — check out this video of him smoking a huge foot-long joint. [Jake Lambourne and Stuart Atkins, the Sun]

February 11: More than 300 exhibitors, growers and agriculture experts attended the 2019 Industrial Hemp Conference last week in Burlington. [Anne Wallace Allen, VTDigger.org]
February 11: The state on Monday opened a new $21 million, 30,000-square-foot testing lab on the Vermont Technical College campus in Randolph. It’ll be ground zero for food, agriculture, and environmental testing, and it'll likely be where the state tests hemp samples. [Anne Wallace Allen, VTDigger.org]
February 12: Vermont Public Radio's "Vermont Edition" explored the progress of tax and regulate bills in the Vermont legislature by interviewing Sen. Dick Sears (D-Bennington) and Karen Lounsbury, a professor of pharmacology at the University of Vermont Larner College of Medicine and co-director of the school’s medical cannabis course. [Jane Lindholm, Vermont Public Radio]
February 13: Weed advocacy org Heady Vermont held its second-annual Cannabis in the Capitol event at the Statehouse on Wednesday. [WCAX]
February 13: During a radio interview, Sen. Kamala Harris (D-Calif.) admitted that she smoked weed — and inhaled — while in college. The 2020 presidential candidate went on to say that she listened to Tupac and Snoop Dogg while she was stoned — two artists that didn’t release albums until after she’d graduated. Her spokesperson said the exchange was a miscommunication because she was answering a different question posed by a second host of the show. And, yes, that this is a thing demonstrates where we are politically in this country right now. [Elijah C. Watson, Okayplayer]
February 14: New York state lawmakers are debating the legalization of recreational cannabis but expressed concern during a hearing Wednesday about the number of California investors that are interested in expanding to the Empire State. [Isaac Fornarola, Cannabis Wire]
February 15: The Vermont Senate Judiciary Committee approved a bill that would create a regulated recreational cannabis market. The measure doesn't include a provision found in House legislation that would allow medical marijuana dispensaries to sell to the general public in 2020 — more than a year before other businesses could open. [Taylor Dobbs, Seven Days]