The Burger's the Thing at Northfield's Cornerstone

Most American pubs serve food, but results vary. At best, their menus offer thoughtful renditions of culinary classics such as meatloaf and fried chicken. At worst, they're good for an everyman meal that's filling and friendly to one's wallet. Often a pub can get by on its burger's merits alone, even if the rest of the menu is awful.

In Northfield, locals loved the Knotty Shamrock pub for its easygoing atmosphere, solid house-brewed beers and gorgeous hardwood bar. At first, the food was great. But over time the menu fell victim to a revolving kitchen door — and an ambitious owner who kept his day job and couldn't give the pub (or its next-door brewery, Paine Mountain Brewing) the time it needed to flourish. Eventually, even the burgers slipped. The village pub closed last August, shortly after its fourth anniversary.

Enter Rich McSheffrey and Keith Paxman. Their Cornerstone Pub & Kitchen has become a linchpin in Barre's evening life as the town limps toward urban renewal. Granite City natives and longtime friends, McSheffrey and Paxman opened Cornerstone in 2012. They followed it up in 2014 with Two Loco Guys just down the street. The fast-casual burrito joint offers wraps filled with typical Mexican stuff — or with Thai peanut chicken and slaw, or Philly beef with peppers and onions, among other unusual options.

In February, the partners opened Cornerstone Burger in the former Knotty Shamrock storefront. The menu spins off the success of their Barre gastropub, where specialty patties play a key role in the menu.

In Northfield, diners will find a few repeats — a couple of burgers, fish-and-chips, and sandwiches stuffed with crispy haddock or buttermilk chicken. But McSheffrey and Paxman made a point to change things up, tweaking the menu to make their new place unique.

Before opening, Paxman told Seven Days that he hoped the new restaurant would become a cozy town hangout — a place where familiar bartenders would serve simple food and fresh beer to a neighborhood crowd. A burger-forward pub, if you will, with Cornerstone's executive chef Paul Fucello overseeing the kitchen. 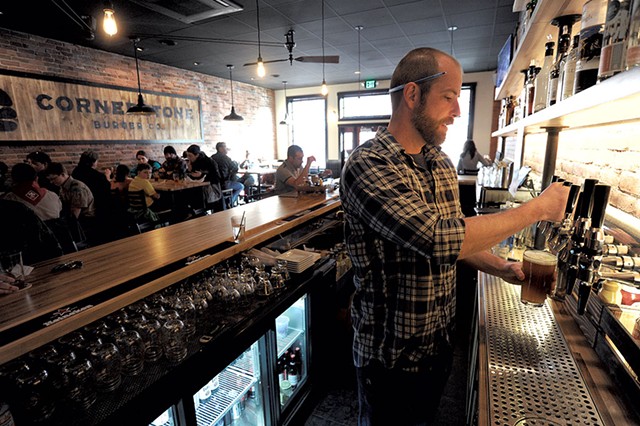 Inside, a handful of high-tops (each large enough to seat six) accommodate guests near the entry, while a row of bistro-style tables gives way to a small dining room at the back. The space, with its exposed brick and pale wood, is modern and classy yet comfortable and unassuming.

At 6:30 p.m. on a recent Wednesday, hockey and basketball games played silently on two TVs above the bar. Most of the tables were full, as families, students and aging couples dug into burgers and beers. Easy banter between patrons and staff suggested that area residents have indeed found comfort in the new pub.

Two young guys — one with the erect posture and bulging pecs of a Norwich University cadet, another with red dreadlocks hanging to his waist — chatted over drinks at the bar.

Across the board, Cornerstone's offerings seem to follow a straightforward ethos: Keep it simple; do it well. This is a beer bar, fair and square. Still, an obligatory smattering of wines — three reds, four whites — span the gamut from big and buttery to light and lean. Liquor bends toward old reliables: $7 for Jameson; $10 for a peaty, 10-year Laphroaig Scotch; $7 for Tanqueray or Hendrick's gin with tonic.

The bar isn't making new waves within beverage culture, but its cocktails are crafted with thought and are a decent value at $11 or less. If my Sazerac suffered from a bit too much water, it was a good reminder that, when eating burgers, beer is a girl's best friend.

I've enjoyed many fine meals at Barre's original Cornerstone and exactly one not-so-great burrito at Two Loco Guys. Sometimes this team's happy-go-lucky creativity works; sometimes it doesn't. Still, at Cornerstone Burger, I had high hopes for a spin on the classic iceberg wedge — though ordering a salad at a burger joint is risky business, especially in winter.

The Bibb lettuce was brisk and springy and dappled with crunchy bits of bacon. Its housemade blue-cheese dressing was fine, albeit globbed on with a heavy hand. But as I dug deeper, the wan cherry tomatoes and lavender slivers of onion recalled the perils of a March salad.

My husband's poutine was a better choice (duh). Served in a mini Dutch oven, the dish was as it should be: a heap of crunchy, hand-cut spuds studded with gooey, fork-twirling cheddar curds, all shrouded in naughty beef gravy.

Another night, the beer-battered onion rings were fried to a brittle, golden crisp. These came with housemade ranch dressing so smooth and buttermilk-y that we ordered extra, just for fun.

But these dishes were supporting cast for the main event: burgers. Cornerstone has 11, each six ounces and priced between $10 and $15. They're fashioned with a variety of proteins, from venison to black beans with quinoa, and topped with accoutrements ranging from pickled vegetables and hoisin (the banh mi) to cranberry mayo and cheddar (turkey). The beef is high-quality, certified Angus. For an extra $3, you can upgrade to Kobe beef or meat sourced from farms around New England — nice choices, though I would love to see a hyper-local option.

The burgers arrive on small cutting boards (made by J.K. Adams in Dorset) and are sided with perky, skin-on frites. The latter can be dusted with Cajun seasoning or made from sweet potatoes, should you think to ask.

During my two visits, some of our patties were cooked barely pink instead of bloody rare, or well done in lieu of mid-rare. But, while temp is critical on a fine steak, I can forgive a little extra heat on an otherwise solid burger. Then again, if burgers are the name of your game, it's importaint to nail them — right?

Regardless, I can say with confidence that the patties at Cornerstone Burger are good. Some — like the Buffalo Bleu, with its wing sauce, sliced and diced jalapeños and molten blue-cheese crumbles — are fantastic. The toppings' melty, spicy tang cancels the need for condiments, and I anticipate seeking it out again before long.

On my second visit, the duck burger was a course-ground, juicy bird, rich and fatty and embellished with slices of honeyed bacon, green apple, melted Swiss and red-wine rémoulade. 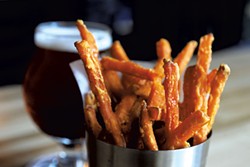 My husband's choice — all runny egg and cheddar with bacon and sausage — read as a breakfast sandwich with a burger in the middle. The PB&J is pretty much what it sounds like: a peanut-butter sandwich with strawberry jam, with bacon and a fat patty in between. Not bad, if you're into that kind of thing.

All of this can get a little messy. But even when the toppings spill over the side, the buns — puffy brioche from Philadelphia's esteemed Le Bus Bakery — are substantial enough to hold their own.

Cornerstone's servers are charming, efficient and prompt. General manager Bobby Clarke's team seems to have coalesced around getting dinner done, and done well, in the brief six weeks since opening. Beers are cold and fresh and arrive quickly. On a busy night, a cook might deliver your burger, opting to get it to the table hot rather than wait while your server attends other diners.

One night, as I savored a spoonful of creamy chowder mid-meal, I wondered Why not make a clam-chowder burger? Cornerstone's creative burgers had me thinking that, done right, nearly anything can be divine on a bun.