The Bubs, 'Cause a Fuss' 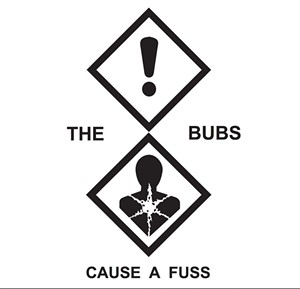 One of the most enticing things about the Bubs is their live show. The Burlington punk group first began as a home recording project of front person (and Chittenden County forester) Ethan Tapper. Since then, it's grown into one of the most vibrant Queen City groups. At the moment, no other local band has tapped into the same spastic channel in which the self-proclaimed "trash kitten orchestra" has found itself. Sporting matching white jumpsuits, the Bubs have an unfettered charisma and wild stage energy that makes them instantly likable.

The group successfully bottles its effervescent essence on its debut LP, Cause a Fuss. The Bubs are fun to watch in large part because of how the band members interact while tearing through their catalog of pop-punk, garage-rock bops. But the songs themselves — and the way they've been captured on the new album — are a whole lot of fun, too, even without the eye candy.

Recorded, mixed and mastered by Tank Recording Studio's Rob O'Dea, Cause a Fuss is a rousing reintroduction to the Bubs. Composed of revamped versions of previously released demos, as well as a selection of new material, the record acquaints the listener with the Bubs' striking attitude and modus operandi. For instance: If a chorus can be shouted, it is shouted.

The same was true on Golden Thread, the Bubs' demo album released approximately one year ago. While that collection was mostly strung together with grain and grit, the new record flexes the group's dynamic range. The peaks are more dazzling when the journey begins in the valley. For example, the softly sung verses of de facto title track "Fuss," underscored by a chunky bass riff, melt away into the rousing chorus of "It's all I can do but scream before I hit rock bottom / I got drunk and I think I caused a fuss."

Tapper has also truly come into his own as a lead vocalist. His flouncing vocals slide in and out of falsetto with great effect, imparting a continual sense of urgency. He and his cohort sing of the kind of existential dread that threatens to derail modern life at any given moment, such as romantic inscrutability ("You're So Enigmatic," "Right Person, Wrong Time") and personal instability ("Pest," "Golden Thread").

Capturing the fighting spirit of the Ramones, the effortless cool of the Kinks and the wall-of-sound choruses of the Cars, the Bubs are a punk-flavored Everlasting Gobstopper.

Cause a Fuss is available at thebubsvt.bandcamp.com on Saturday, March 14. The band celebrates its release the same day at Old Spokes Home in Burlington.

Speaking of The Bubs, 'Cause A Fuss'

Album Review The Bubs 'Cause a Fuss'