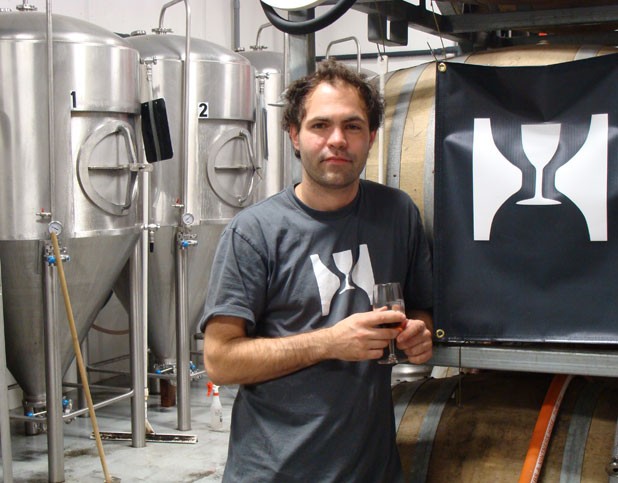 Shaun Hill peers through a hatch into a large metal tank that resembles the Apollo space capsule. Steam coats his face and shaggy brown hair as he pours green hops pellets from a plastic container into the simmering beer. He steps down from a platform, sets a timer and starts to squeegee water off the brewery’s concrete floor.

Outside, the weather is wet and raw, but inside Hill Farmstead Brewery it feels like a sauna. Hill and his apprentice, 24-year-old Owen Miller, are brewing a batch of autumn saison, a Belgian-style ale that farmworkers would drink at the end of a hard day’s labor. While Hill minds the kettle, Miller rakes the steaming malt, oat and barley mash from the tank where the brewing began earlier that morning.

In this modest garage off a dirt road in rural Greensboro, 31-year-old Hill is using a blend of chemistry and artistry to create some of the most buzzed-about small-batch beer around. That buzz is coming not just from Vermont but from the broader beer world.

Since launching last April, Hill Farmstead Brewery has racked up accolades from beer buffs on websites such as BeerAdvocate, where last week Hill’s Ephraim Imperial IPA was ranked No. 2 on the list of Top Buzz Beers. Even more impressive: Three beers Hill brewed while working as a guest brewer for Nørrebro Bryghus brewery in Denmark won two golds and a silver at the 2010 World Beer Cup in Chicago this past spring.

“I have never seen such demand for beer from such a small producer,” says Jed Davis, co-owner and chef of The Farmhouse Tap & Grill in Burlington, which keeps three or four Hill Farmstead beers on tap. “Shaun is a rising star in the local brewing scene. Shaun Hill and Sean Lawson [of Warren-based Lawson’s Finest Liquids] both have this cult following.”

The cult remains a select one, since both Lawson’s and Hill Farmstead beers are currently only available at a handful of bars and restaurants. Hill sells growlers and bottles in his tiny retail shop at the brewery, but the lion’s share of the 400 gallons he brews each week is kegged for wholesale distribution to Vermont, New York City and Philadelphia. He hopes to break into the Boston market next spring.

Locally, Hill’s beer is on tap at The Farmhouse, Bluebird Tavern in Burlington, Blackback Pub and Flyshop in Waterbury, Three Penny Taproom in Montpelier, Claire’s Restaurant & Bar in Hardwick, The Parker Pie Company in West Glover, and Willy’s Restaurant in East Burke.

Beer is in Hill’s lineage. In the 1800s, his great-great-grandfather, Aaron Hill, operated a tavern at the bottom of Hill Road. That’s the same road where Hill lives and brews now, in an old clapboard farmhouse with hops growing vine-like up the side, on the 100-acre homestead where his ancestors settled eight generations ago. Their former taproom provided the inspiration for the brewery’s hourglass-style logo, which is branded on Hill Farmstead’s wooden taps and oak barrels and silk-screened on T-shirts for sale in the brewery.

“I came across the sign while visiting my cousin Lewis Hill, who lived up the hill,” recalls Shaun Hill. “I was sitting, drinking tea with Lewis, when I looked up and noticed this great sign that reads “A. Hill Entertainment.” Also on the sign was a carafe and a wine/libation glass. Instantly I knew what the logo should be for the brewery.”

On the day Seven Days visits Hill Farmstead, brewing the saison starts with 600 pounds of barley, oats, hand-toasted Munich malts, and flake rye for color and flavor. That’s mixed with 760 liters of water in an enormous, propane-fired mash tun.

When it’s done, the liquid wort is pumped into a cone-headed kettle, into which Hill dumps five tubs of hops pellets throughout the 75-minute cooking cycle. After that, the liquid moves through a heat exchanger to cool it to a temperature — about 70 degrees — at which yeast can be added without being killed. From there, the brew filters into five large fermenters where yeast joins it and the wort becomes beer.

In every spare second, Hill is cleaning his equipment, dealing with propane delivery drivers, answering the phone and filling growlers for customers.

Beer has kept Hill busy for a while: At the age of 15, he brewed his first batch for a high school science-fair project. He used malt extract, hops, water, a package of dry yeast and some raspberries to demonstrate how fermentation works. The result was a strange brew that was almost undrinkable, Hill recalls. He gave some to his teacher and poured the rest down the drain.

But the experiment uncorked a passion, and the Vermont native was hooked on home brewing.

At Haverford College, Hill started a home-brewing club with money from the student council and permission to brew using campus stovetops. He used “clone” recipes to imitate his favorite beers but improvised liberally.

“I never brewed a recipe exactly as it said in the book,” Hill says.

After graduation, Hill moved back to Vermont and taught psychology and anthropology at North American Hockey Academy, an all-girls school in Stowe. He stopped in at The Shed Restaurant and Brewery for an after-work beer one day and noticed a job opening for a keg washer. It was his first paying gig at a brewery. Years later, he would be hired as the main brewer at Shed, where he earned a reputation for his talent.

Three years ago, Hill incorporated the business name Grassroots Brewing with plans to open a craft-beer brewery in or around Hardwick. But he couldn’t find the funds. After a stint at Trout River Brewing Company in Lyndonville, where he gained some “production experience,” Hill landed the guest brewer gig at Nørrebro Bryghus.

There he started the brewery’s oak-barrel-aging program and brewed the three beers — an imperial stout, a barley wine and a sour ale — that his Danish boss entered in the 2010 World Beer Cup after Hill moved back to Vermont.

Winning medals for them “was a nice validation,” Hill says. “It’s nice to know I actually know what I’m talking about and what I’m doing.”

The money came through, too. During his time in Denmark, Hill says, he connected with “brewers and beer geeks” who helped provide the $100,000 investment he needed to launch what became Hill Farmstead. Trout River loaned him a kettle, and The Alchemist Pub & Brewery in Waterbury loaned him a mash tun. Hill bought the rest of his gear secondhand.

Hill says his goal is to rebuild the farmstead in “all its glory,” making artisanal beer the way some Vermont dairy farmers make artisanal cheese. He originally planned to grow his own ingredients but says he quickly realized, “I’m not a farmer. I’m farming beer.”

Local sourcing isn’t always an option, either. Hill has had to rebuff local would-be hops growers who wanted to partner with him because, he says, they couldn’t supply the quantity or variety he needs. A sign just inside the brewery’s door warns, “No, we are not interested in your hop-growing project.”

“It’s a good way to reclaim my ancestry and heritage in Greensboro,” Hill says. “All these people are ghosts and wouldn’t be remembered without telling their stories. Someday I’ll be a ghost, and me doing this will be my own ghost story.”

Hill sometimes talks like the philosophy major he was, and he’s also named beers for his favorite thinkers. Fear and Trembling, a Baltic porter, honors the Danish philosopher Søren Kierkegaard. It’s made with maple-wood-smoked malts and aged in French oak cabernet and bourbon barrels. Twilight of the Idols, a winter porter brewed with coffee, vanilla beans and cinnamon, is also the title of a book by Friedrich Nietzsche.

Hill uses words to describe beer that some would reserve for wine, such as “elegance,” “roundness” and “softness.” He sniffs his beer before he drinks it, cocking the glass to the side to get a whiff, and says he likes flavors that are “very bright.” He has a limited number of oak barrels — bourbon barrels from Sam Adams Brewery in Boston and wine barrels from California wineries — that he uses to age special brews made with raw honey, microflora or an especially high alcohol content. Hill Farmstead has also produced a series of single-hop IPAs to showcase individual hop flavors lost in typical blended-hop India pale ales.

Hill Farmstead is attracting other brewers from far and wide who are eager to observe and talk shop with Hill. On the day we visit, Hill is assisted by Brian Strumke, a self-described “gypsy brewer” from Stillwater Artisanal Ales in Baltimore, who travels from brewery to brewery “spreading the craft-beer gospel,” as a recent National Public Radio profile put it.

Chefs and restaurant owners are raving about Hill Farmstead, too. The Farmhouse purchases more beer from Hill than from any other brewery, according to Davis. Earlier this fall, the Burlington restaurant hosted a special beer-and-cheese pairing event with eight of Hill’s beers and cheese from Jasper Hill Farm.

Both Hill Farmstead and Lawson’s are planning expansions, so Davis sees “good things coming down the pipeline for beer lovers in this state.”

Hill’s expansion wouldn’t take him away from Hill Road — there’s still room to grow where his forebears farmed. He’d like to rebuild a barn beside the brewery that burned down years ago in a hay fire.

“If we can rebuild that barn, we could grow to four to six times what we are now,” Hill says. Because, in brewing as in life, what doesn’t kill you makes you stronger.