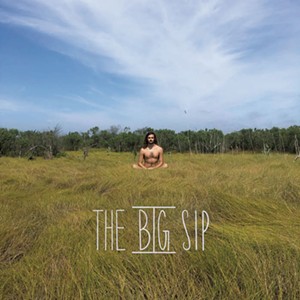 Formed at Middlebury College, the Big Sip joined the college and jam band circuit in 2016. A year later they released their debut EP, Music for Clapping, followed in 2018 by a second self-released EP, Sip Responsibly.

Recorded with engineer Previn Edwards and released in August, The Big Sip builds on the band's earlier efforts. Jammy prog experimentation and allusions to '70s fusion and '90s acid jazz underlie this thoughtfully arranged, ambitious batch of well-polished songs. These guys don't buck the jam band trend entirely, but they avoid the pitfalls of bland singing and one-chord songs. Their intelligent songwriting and smooth eclecticism is reminiscent of Percy Hill's jam band classic Color in Bloom.

On the hard-hitting opener, "Fruits of Life," Diener's agile voice climbs over Mercer's propulsive beats and Cattabiani's rolling bass lines. "Catch me if you can," Diener sings, "one foot first, and then the other," while his sophisticated chord changes intertwine with Schrope's cool, lounge-lizard keys.

The second track, "Deadlift," is a slow-burn crescendo to an all-gas-no-brakes climax. It opens with Diener's distinctive guitar playing — noodley but not wanky. His arpeggiated lines ascend into a sonic ether, where, in a birdlike murmuration, the rest of the band joins in with a melodic whirl of zigzagging parts and spiraling rhythms. The track ends with aggressive synths that scream like banshees, unleashing a moodiness uncommon in the jam idiom and closer to, say, King Crimson.

The Big Sip is so precisely composed that a commitment to design shines through in every track. Notable moments include the crunkdafunkdafied banger "Will"; "Missing Pieces," which evokes the grandeur of the Pat Metheny Group; and "Zetsu," with its bell-toned Rhodes keyboard setting — an homage, I'd wager, to George Duke's work with Frank Zappa.

Through it all, Diener's soulful, mellifluous vocals are central, though they yield to the album's many instrumental explorations — reflecting the Big Sip's proclivity for extended improvisation at live shows.

The Big Sip is available at thebigsip.bandcamp.com.