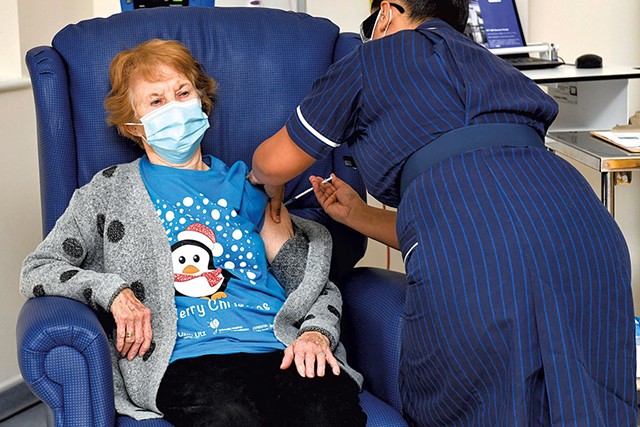 Who goes first? Vermont officials have been pondering that question for months, when the prospect of a COVID-19 vaccine still seemed like wishful thinking. Now, with packages of Pfizer-BioNTech's vaccine poised to reach the state in a matter of days, they're racing to put their plan into action.

Consistent with federal guidelines, the Vermont Department of Health has identified health care workers, first responders and residents of long-term-care homes as the highest priority for vaccination. But those nearly 60,000 individuals far outstrip the estimated 20,000 doses that Health Commissioner Mark Levine expects will arrive by New Year's Day.

That's left hospitals and other organizations in the so-called "Phase 1a" group to narrow their lists of highest-priority individuals, without yet knowing how much vaccine to expect, or when.

It's a complicated endeavor, said Jill Olson, executive director of the VNAs of Vermont, the group representing most home health agencies.

Olson's industry employs about 2,500 people, but she expects only a fraction will be vaccinated in the first few weeks. Agencies are attempting the imperfect science of prioritizing employees who are personally at risk and whose labor is most crucial. They're comparing nurse managers with direct caregivers and identifying employees who work directly with the 38 COVID-19 patients in Vermont who were receiving home health services as of last week.

"It's a moving target," Olson said.

Such decisions would have been an academic exercise in Vermont just a couple of months ago, when daily case counts and hospitalizations were in the low single digits and the state went nearly 100 days without a death attributable to the disease.

COVID-19 has come raging back this fall, however, killing more than 25 people in the last month as daily infections spiked to their highest levels yet. The state is fighting outbreaks in at least eight long-term-care facilities, where the virus has proven devastating to elderly residents. Health care workers, who have made up 12 percent of diagnosed cases in Vermont, have also been infected at higher rates in recent weeks.

To them, every day counts.

A U.S. Food & Drug Administration advisory panel is scheduled to meet Thursday, December 10, to review clinical trial data for the Pfizer-BioNTech vaccine, which the companies say is 95 percent effective and does not have serious side effects. Once the FDA grants an emergency-use authorization — expected within days of the December 10 meeting — Pfizer has said it will begin shipping the vaccine immediately.

Federal regulators will consider another promising vaccine manufactured by Moderna on December 17.

The United Kingdom administered its first doses of the Pfizer-BioNTech vaccine on Tuesday, marking an international milestone in the effort to end the pandemic. The United States has reportedly purchased enough doses of the Pfizer-BioNTech and Moderna vaccines to inoculate 100 million people but has yet to secure doses for the remaining 228 million Americans. The federal government is rationing its supplies according to each state's population. Vermont officials expect to receive about 5,850 doses in the first weekly shipments.

The state plans to direct its share of vaccines to hospitals by way of a distribution depot, Vermont Emergency Management director Erica Bornemann said. She declined to disclose its location. To safeguard the Pfizer-BioNTech doses, the state has secured more ultra-cold freezer space by borrowing equipment from the University of Vermont Medical Center and purchasing an additional freezer, which should arrive this week. The state is also stockpiling enough dry ice to keep the doses cold while en route to hospitals around the state, many of which don't have their own ultra-cold storage.

The depot will provide a staging area where health department employees can break apart Pfizer-BioNTech's 975-dose shipping containers and repackage them into smaller amounts to send to more rural locations, Deputy Health Commissioner Kelly Dougherty said. Doing so will ensure that the early rations are used most efficiently.

The depot should be able to store half a million doses of the vaccine. "The idea here, though, is that the vaccine isn't staying in the depot for very long," Bornemann said.

Hospitals without ultra-cold storage will have about five days to administer the doses once thawed. During that window, they'll need to reach employees and others in their communities who are eligible for vaccination during Phase 1a. These vaccination pushes will likely be set up like annual flu shot drives, "but on steroids," said Tim Lahey, an infectious disease doctor at the UVM Medical Center who sits on the state's COVID-19 Vaccine Implementation Advisory Committee. A drive that might normally take place over a month will be condensed into a few days.

"There is sort of a lack of information around what it's going to look like beyond the first initial phase." Deputy Health Commissioner Kelly Dougherty tweet this

As of early this week, officials at Gifford Medical Center, a 25-bed critical access hospital in Randolph, didn't know how much vaccine they'd receive in the first shipments. The hospital has 623 employees and will also administer doses to emergency responders and home health workers in the area.

Hospital leaders surveyed employees a few weeks ago and found that 300 or so wanted to be vaccinated, according to Monica Boyd, director of quality and risk management. If Gifford's initial allocation is lower than that, the hospital will prioritize those who are involved in direct care, she said.

Gifford's employee survey is in line with national surveys, which suggest that only 50 to 60 percent of Americans are ready to be vaccinated. A recent U.S. Centers for Disease Control and Prevention poll of health care workers found that 63 percent would take the vaccine.

Boyd and Lahey attribute the seemingly low percentage to health care professionals' cautious attitude. Detailed information about Pfizer-BioNTech's clinical trial was only released publicly this week, ahead of Thursday's FDA hearing — and after most surveys were administered.

"They're waiting to get a little bit more information on safety," said Boyd, who has decided to get vaccinated herself.

Vaccinated individuals may get some protection from the virus 10 days following the initial dose, according to Pfizer-BioNTech, but don't attain long-term benefits until at least a week following the second dose. It remains to be seen whether immunized people could still transmit the virus to others.

Long-term-care homes are enrolled in a federally managed vaccination program that will rely on private pharmacies to inoculate residents. Those doses will be shipped directly to participating pharmacies, bypassing the depot, but still count toward the state's overall allocation, Dougherty said.

There are more than 5,300 residents and 8,200 workers at Vermont's long-term-care homes who appear to qualify for doses in Phase 1a, by the state's count, which means the vaccination process could take several weeks. Levine said on Tuesday that roughly half of the state's initial weekly allocations will be earmarked for the pharmacy-administered program. Further details of that process, announced months ago, were still being worked out this week.

The CDC has indicated that vaccination clinics in long-term-care homes could start on December 21, said Alecia DiMario, executive director of Birchwood Terrace Rehab and Healthcare in Burlington. "However this is dependent on when the state receives the vaccination, the amount of vaccine allocated to [Vermont], and how it is prioritized for administration," she wrote in an email.

The initial vaccine rollout may be small, but it should have an outsize effect in the battle against the coronavirus, Lahey said. Protecting hot spots such as nursing homes would ease the toll and shore up the health care system while the state embarks on the more daunting task of vaccinating the general public, Lahey said. Nursing home deaths have accounted for 61 percent of all COVID-19 fatalities in Vermont. The facilities have proven to be environments especially prone to outbreaks.

The health department's October vaccination plan divides the process into four general phases. Phase 1b includes people with health conditions that put them at "significantly higher risk" and older adults in other congregate or overcrowded settings.

Phase 2 includes certain essential workers, including educators, as well as incarcerated individuals and prison staff, those at homeless shelters or group homes, and other older adults. Young adults, children and other adults in industries "important to the functioning of society" are next, followed by everyone else.

An updated vaccination plan, with more detailed information, is forthcoming, according to Dougherty.

The state has cautioned that it could take several months or longer to work through those phases. The health department plans to eventually host public vaccination clinics as the effort progresses, but many details are still being worked out — or are dependent upon how the vaccine supply chain develops.

"There is sort of a lack of information around what it's going to look like beyond the first initial phase," Dougherty said.

The vaccine's landfall won't change the day-to-day operations inside Vermont hospitals, as social-distancing and personal protective equipment regimens will need to remain in place. But many of those health care workers who receive the state's early doses could be called upon in the months ahead to fight COVID-19 on a new, perhaps final front: helping to vaccinate everyone else.