The Big Four: The Donors Who Fuel Vermont Conservatism 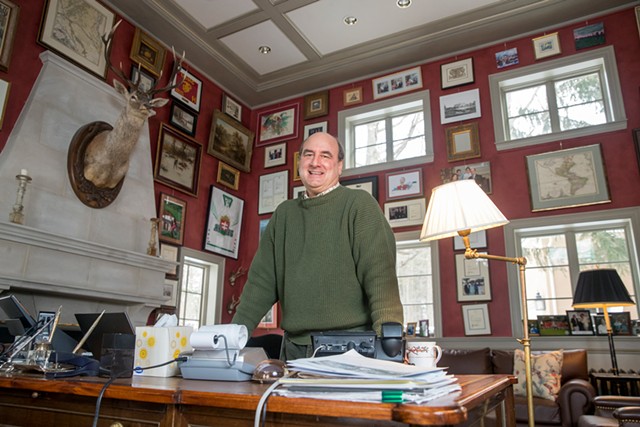 It isn't easy being a Republican in Vermont. The electorate has a definite leftward lean. The state party is chronically underfunded. With rare exceptions, Republican candidates have fewer resources than their Democratic counterparts.

But a few Republican donors are trying to shift that balance: Skip Vallee, a Shelburne fuel dealer; Lenore Broughton, a Burlington resident who inherited a fortune from her grandfather, corporate chieftain Sewell Avery; and Tom and Carol Breuer, a Massachusetts couple that bought a second home in Stowe in 2013 and have spent heavily on Vermont politics ever since.

In the 2016 election cycle, those four individuals and their corporate entities and family members donated at least $205,000 to Republican candidates and causes. They're on track for a repeat performance this year. As of September 1, they were already up to $140,645.

And here's a fact: Not a dime of their money has gone to Gov. Phil Scott. Broughton, in fact, gave $4,000 to Keith Stern, Scott's conservative primary challenger. Vallee, his family and his company have given a total of $16,000 to House Minority Leader Don Turner (R-Milton), who's running for lieutenant governor against Progressive/Democratic incumbent David Zuckerman.

But nothing for Scott, although Vallee intends to change that. "I'll be doing a fundraiser for Don and Phil," the former Republican national committeeman said. "My enthusiasm for Don and the governor continues unabated."

No doubt. Vallee gave the Scott campaign nearly $20,000 in 2016. As for Broughton and the Breuers that year, a big fat zero.

Neither Broughton nor the Breuers responded to requests for comment, but history suggests that they are much more conservative than Scott. The Breuers are known in Massachusetts for supporting Christian right and anti-marriage-equality causes. Broughton gives generously to right-wing causes nationwide. In 2012, she created and self-funded Vermonters First, a political action committee that spent more than $1 million in a largely futile effort to influence the election.

Vallee is a conservative, but a pragmatic one. He cites the words of writer William F. Buckley: "Support the most conservative candidate who can win."

The Big Four's generosity is one of the VTGOP's few advantages in the fight for seats in the House. Democrats are hoping to win the power to override gubernatorial vetoes, which requires a two-thirds majority. Republicans currently hold 53 of the 150 House seats; they want to retain at least 51. The Breuers have given to 23 House candidates. Vallee has given to only five so far, but he said, "I intend to be very supportive in the House."

In many cases, candidates have leaned heavily on the Big Four to fuel their campaigns. Mary Beerworth, executive director of the Vermont Right to Life Committee and a Republican candidate from Fairfax, has raised $5,230 so far. All but $200 came from Broughton, Carol Breuer, Vallee and his wife, Denise. Joy Limoge, a Republican hopeful from Williston, has received $2,030 from the Vallees and a total of $100 from the rest of humanity. Valerie Mullin, a Republican candidate from Monkton, has raised $2,000 — all from the Breuers.

The Breuers and Broughton have also underwritten the frequently cash-strapped Vermont Republican Party — to the tune of $40,000 this year, plus another $37,500 in 2017.

What does it mean when a handful of conservative donors provide so much of a party's bankroll, especially when there are signs of division between the party and its top officeholder?

At the time, Scott expressed mild dismay but added, "I don't have any control over what they do in the party."

There's clearly a gap between Scott and the VTGOP. And if the Big Four can wield influence proportionate to their generosity, the gap seems likely to grow.

All five appear to have little chance of victory given their very late start, relative anonymity and lack of resources. And Scott is the only Republican to win a statewide office since 2010.

So, since real competitiveness seems out of reach this year, how can the VTGOP boost its statewide fortunes in the future? The answer is no surprise: "Be Like Phil."

Jason Gibbs, Scott's chief of staff and the Republican candidate for secretary of state in 2010, cited "a very consistent formula" for success. Vermont, he said, is "a great place for moderate Republicans" — not only Scott, but former governors Jim Douglas and Dick Snelling and former senators Jim Jeffords, Bob Stafford and George Aiken.

"They're nice guys, and they're moderate," state Sen. Randy Brock (R-Franklin) said of Scott and Douglas. Brock has run statewide four times, winning for auditor in 2006, losing a reelection bid in 2008, and running unsuccessfully for governor in 2012 and for lieutenant governor in 2016. "Candidates who are moderate and have personal appeal can attract Democratic voters."

These days, carrying the "R" next to your name makes it hard to convince voters of your centrist bona fides. "Trump creates problems," said Rep. Corey Parent (R-St. Albans), a young Republican who's running for Senate and is widely seen as having aspirations for higher office. "Without that, I think we'd have an opportunity to capture moderate voters."

Somehow, Brock said, "We've got to do a lot better job recruiting and encouraging candidates. We can't be in this situation again in 2020."

Easier said than done. After all, this is the first time since 2002 that the party has fielded a full statewide ticket — and it only did so this year because of the machinations of political gadfly H. Brooke Paige, who won six separate Republican nominations in the August 14 primary. He willingly vacated five (he's still running for secretary of state) on the condition that the party could find willing candidates for those slots. It did, in a hastily arranged special meeting.

Gibbs' formula notwithstanding, there are powerful forces within the VTGOP — party officials, officeholders and major donors — that don't want the party to follow the moderate path. They'd rather pursue the national model of no-holds-barred conservatism. And that makes it harder to develop and promote candidates in the Scott/Douglas/Aiken mold.

It's likely we don't yet know the full story behind the departure of state Rep. Kiah Morris (D-Bennington) from political life. She withdrew from her reelection bid only 10 days after winning the August 14 primary and on the last possible day that would allow her party to choose a replacement.

In a Facebook post announcing her decision, Morris referred to "the divisive, inflammatory and, at times, even dangerous" tenor of political discourse. The attorney general's office has launched an investigation. Rep. Kevin "Coach" Christie (D-Hartford), Vermont's only other black state representative, hinted of "things that haven't hit the news" and blasted Bennington-area law enforcement and prosecutors for failing to take the situation seriously. "Hopefully, the AG's investigation will make it a lot clearer," he said.

Morris declined to comment for this column. She did discuss the harassment on Vermont Public Radio's "Vermont Edition" last Thursday. "We had propaganda being left underneath the door of the Democratic Party," she told VPR. "I had a home invasion, vandalism, even the woods near my house ... had swastikas painted all over the trees there."

One thing is clear: Morris' withdrawal is a big loss. There are only a handful of people of color in the 180-member body. In her two terms in office, she's had an outsized impact. "She has been an incredibly strong voice for equality and justice," said House Speaker Mitzi Johnson (D-South Hero). "It's clear that her strength and her voice as a black woman is threatening to some people."

"This is the reality of campaigning for women and people from marginalized groups," said Ruth Hardy, executive director of Emerge Vermont, a group that trains and supports female Democratic candidates. (Hardy is also a candidate for state Senate in Addison County.)

Rep. Diana Gonzalez (P/D-Winooski) is the legislature's only Latinx, but she says she's a smaller target than Morris for three reasons. First is skin tone. "She is subject to more attacks than me, as a light-skinned Latina," Gonzalez said. "The town [Morris] represents is not as progressive as Winooski. And she is much better at social media. Unfortunately, the more visibility you get, the more negative feedback you get."

In the wake of February's threatened school shooting in Fair Haven, Gov. Scott said the incident forced him to realize that "we are not immune to tragic violence." Morris' withdrawal offers the same lesson about hatred: We are not immune.

Johnson talks of possible legislation. "Do we have adequate laws on stalking and threatening in an age of social media? We're looking this fall at what we might need to do." Still, she added, "It's really hard to legislate the hate away. We need to do what we can in our communities to discourage this kind of hate."

"I'm kind of excited, in a way, to continue the work," said Christie. "What Dr. King talked about: 'I've been to the mountaintop and I've seen the promised land.' That's what we're working for. We want Vermont to be the promised land."

Before we can cross over that mountain, a lot of folks will have to abandon the belief that Vermont is already the promised land.

The Graying of WCAX-TV has taken another big step, with deep cuts to its production team. This is the third round of job cuts since August 2017, when Atlanta-based Gray Television bought the station from the Martin family of Vermont.

In July, WCAX vice president and general manager Jay Barton disclosed "a process" of retraining and streamlining the production staff. When it began, there were 13 full-time staffers and seven part-timers. Now there are nine full-timers and only one part-timer.

How many of the departees were laid off? Barton says one or two. The rest, he said, "made decisions in duress." In other words, you make it hot enough and people get out of the kitchen.

Barton said in July that this would be the last round of cuts at WCAX in the forseeable future. He still says so — but he added that in a rapidly changing media landscape, no promises are on offer.