The Best Is Still to Come

Jimmy Cliff shepherds in a new era of his career 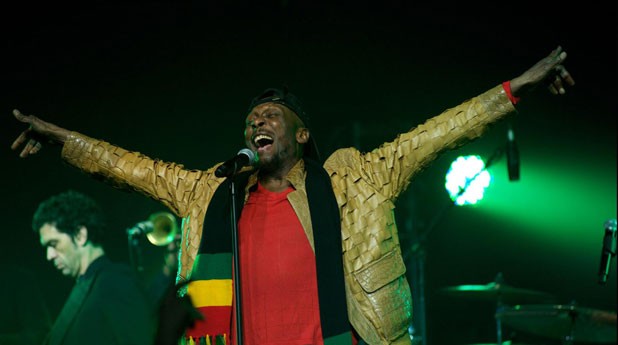 If there were a Mount Rushmore of reggae superstars, Jimmy Cliff’s smiling visage would be etched in stone alongside giants such as Bob Marley and Peter Tosh. Cliff, 64, is considered an originator of the genre and remains one of its most identifiable stars. His nearly 50-year career has produced some of reggae’s enduring hits, including “You Can Get It if You Really Want” and “Many Rivers to Cross.” Both of those songs are on the soundtrack of cult-classic film The Harder They Come, in which Cliff starred. Artists ranging from Paul Simon to Bob Dylan to Joe Strummer have cited him as an inspiration. In 2010, Cliff was inducted into the Rock and Roll Hall of Fame.

Despite those accolades and global acclaim, Cliff is not content to rest on his laurels. In fact, to hear him tell it, he still hasn’t produced his finest work. In 2010, Cliff released an EP, Sacred Fire, recorded with Rancid’s Tim Armstrong. That project led to a forthcoming full-length collaboration, Rebirth, due out this month, on which Cliff reportedly gets back to his ska, rocksteady and reggae roots.

Seven Days recently chatted with Cliff by phone in advance of his upcoming performance at the Waterfront Tent on Saturday, June 9, as part of the 2012 Burlington Discover Jazz Festival.

SEVEN DAYS: Tell me a little about the new records, the Sacred Fire EP and Rebirth. What were the concepts behind them?

JIMMY CLIFF: Sacred Fire was about the secrets I’ve learned as an artist, and the fire that has been burning in me as an artist for all these years. There are things that I’ve set out to do but have yet to accomplish.

SD: What kinds of secrets?

JC: Well, if I told you, they wouldn’t be secrets, now, would they?

SD: Good point. I suppose not. And Rebirth?

SD: It’s interesting to hear you say that, because it would seem that you’ve accomplished a lot. What kinds of things?

JC: When I started my career, I had this global outlook. I wanted to make a lot of No. 1 hits all over the world and become a stadium act, which I haven’t done. But my first love was acting, and I really want to win an Oscar. So even though I have become an international artist and am recognized all over the world and have accomplished quite a bit, those lofty dreams I set have yet to be accomplished. And I’ve not yet written my best songs. Those are the things.

SD: Having been doing this for so long, are those the things that drive you now?

JC: Yes. All of those things. I still have those songs in me, but they are not really ripe yet. They’re not ready to come out and [be] put into the public. And I haven’t gotten the right scripts to do the acting that will bring me the Oscar. So that keeps the fire burning.

SD: You were there to witness the evolution of ska into rocksteady and then into reggae. Can you tell me about that and how it relates to Jamaican history?

JC: This is an interesting question for me. There is a song on my new album called “Reggae Music.” And I’m telling the story of reggae and myself as an artist, from the time I found Leslie Kong, who was my first producer, and he had me record my first songs in the style of ska. And I take it from that time, 1962, all the way up to 2012, and all of the journeys and transitions.

Ska music was upbeat and came out of a political situation, a fight for independence. Then it slowed down and transitioned into rocksteady, when the people asked, “Well, what is this independence?” Then it transitioned into reggae, which became more spiritual. So all of those sounds and all of those different rhythms came out of those different spirits. And I have kind of put all of that history, I think kind of successfully, into a three-and-a-half-minute song.

SD: That’s quite a feat. You spent a lot of time in England, and had a hand in introducing reggae and ska there. And the meeting of Jamaican music and punk also centered on political strife. What was that time like?

JC: It was a time in England when the social and political scene affected the young musicians that were growing up there. And they grew up listening to reggae music, which inspired and influenced them a lot. Joe Strummer and the Clash were among those. And when they wrote “[The] Guns of Brixton,” I could identify with that song and, yes, partly because they mention The Harder They Come in it. But also because I saw what was going on in Brixton in that time. It was a very interesting time over there.

SD: Do you see parallels between those times and the social issues happening here and in Europe now?

JC: Yes. There is the same element of injustice that is triggering what goes on in the social lives of the people. Injustice and imbalance. The rich getting richer and the poor getting poorer. And that was the same kind of thing that was going on in Jamaica and that inspired the punk-rock era. And it’s still going on today.

SD: As one of the originators of reggae, what are your thoughts on how the genre has progressed into the current era?

JC: So we moved from ska to rocksteady to reggae to rub-a-dub to dub and all of the different styles, and now we are at dancehall. And there are two sides to what we call dancehall. There is still the roots and culture side. But it is interesting to me. The dancehall, rhythmically, is really good. But what they’re saying on top of that is simply about girls and cars and superstars. And there is much more to life than that for me. So I’m glad to see the roots and culture side is still there.

SD: Most people know the big names from the early days of reggae. But I wonder if there are some lesser-known artists you think people should know about.

JC: There was Desmond Dekker, who had hits like “Israelites.” And there are some newer people, like Tarrus Riley and Queen Ifrica, that I think people should keep their eyes on.

SD: You were instrumental in the early days of Bob Marley’s career and have said that you view yourself as a shepherd. Can you tell me about that role?

JC: A shepherd opens the gate and lets the sheep go through, and then closes the gate and allows the sheep to feed in the new pasture. And that has kind of been my role, which is more of a pioneering role. That’s what I have been doing all my life. It’s not a role that I chose. It’s just something that I happen to do naturally. I enjoy it. And that role is still going on today.

Jimmy Cliff performs this Saturday, June 9, 7 p.m., at the Waterfront Tent as part of the 2012 Burlington Discover Jazz Festival. $35/40. Toussaint the Liberator and Amandla open.