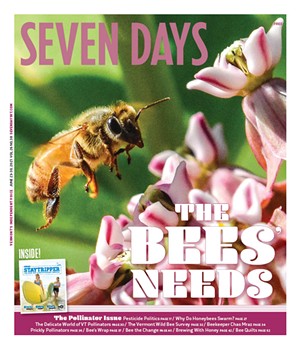 For the first time ever, I've been watering the milkweed in my yard. Who waters native perennials, right? But rainfall was unseasonably low for the fourth spring in a row, and I wanted to be sure the plants could support thirsty pollinators. Sure enough, in a five-minute count last week, more than 10 species of bee, wasp, butterfly and moth flitted from flower to flower. Their buzzing bliss was a beautiful sound — and a relief.

Pollinators are in trouble. "Habitat loss, invasive species, single-crop farming, disease, and pesticide use are a few of the threats" affecting pollinator insects, reported the Vermont Fish & Wildlife Department in 2020. Two years earlier, the Gund Institute for Environment at the University of Vermont reported that nearly half of Vermont's bumblebee species either had vanished or were in serious decline. Other local pollinators, such as bats and hummingbirds, are also vulnerable to human encroachment, including the climate crisis.

Vermonters are eager to nurture and protect these precious beings for many reasons. Not only do we rely on them to pollinate wildflowers and most vegetable and fruit crops, but they're an essential part of a healthy ecosystem. And though honeybees are not native to the U.S. and often compete with wild bees, they endear themselves to us by making honey, that beloved sweetener.

Many Seven Days readers recently pitched stories about their concern for and devotion to bees, butterflies, birds and other such marvels of nature, so we decided an impromptu theme issue was in order: the Pollinator Issue.

A first step in protecting pollinators is knowing the number of species and their needs. Spencer Hardy of the Vermont Center for Ecostudies is working on a collaborative project to build the state's first online wild bee atlas. Since 2019, professional and citizen scientists statewide have identified more than 300 species, and they expect to find more.

That service is of particular importance to Vermonters such as Chas Mraz, the third-generation owner of Champlain Valley Apiaries in Middlebury. We spoke with him about bee-human interdependence, what's threatening that relationship, and the decline he has witnessed in honeybee health and longevity.

Sometimes, even healthy honeybee hives face challenges. When they become too crowded, some bees will organize to find new digs. This week's "Whiskey Tango Foxtrot" column explores why and how bees swarm, or move, and what to do if they choose to populate your porch

At least one Vermont artist finds inspiration in hive geometry and honeybees. Hope Johnson of Shelburne creates intricate, award-winning quilts and fiber art whose patterns and colors reveal her love for the winged wonders.

But all this talk about honeybees can get other creatures rather miffed. We held a pollinator focus group in a blooming meadow to give them a chance to vent, and, boy, did they ever. An irate bald-faced hornet even called honeybees "cows with wings."

We decided these disgruntled pollinators needed extra kudos, so we asked South Hero photojournalist Rob Swanson to share some of his close-ups. The resulting photo essay of moths, butterflies, hummingbirds and other creatures, taken throughout Grand Isle County, will take your breath away (page 30).

If you'd like to snap your own photos of fancy flyers, hover near the perimeter of a field planted by Mike and Tawnya Kiernan of Bee the Change. Their Weybridge nonprofit has been establishing pollinator habitat in solar fields since 2016.

Want to join the ranks of Vermonters supporting pollinators? Reduce where and how often you mow, don't use insecticides, and let wildflowers and weeds grow to provide the diversity pollinators love. You can also purchase products such as Bee's Wrap to support best beekeeping practices and reduce your use of plastics. The Middlebury company makes food wraps with organic cotton coated with pesticide-free beeswax. Now that's something to buzz about.