The Bard is Back for "Much Ado" in the Champlain Islands 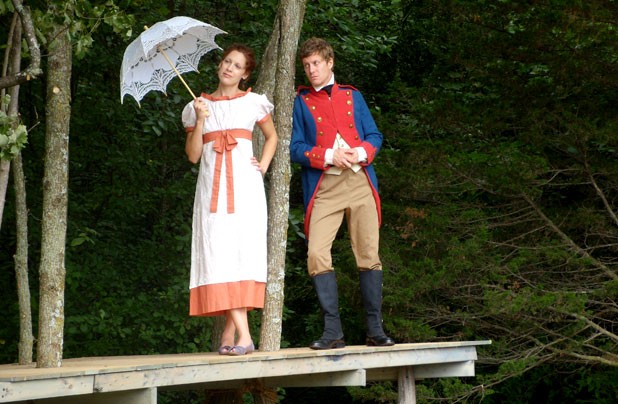 In recent years, the Vermont Shakespeare Company has established a new tradition in the Champlain Islands: plein-air presentations of the Bard’s plays. So far, founders Jena Necrason and John Nagle have staged engaging interpretations of A Midsummer Night’s Dream, Twelfth Night and The Comedy of Errors. For an amphitheater, VSC uses a funky, semi-forested space nestled in North Hero’s Knight Point State Park. The venue perfectly suits the company’s family-friendly mission “to make classical theater accessible and hip.”

But last summer, the echo of iambs fell silent in the isles. Spouses Necrason and Nagle stayed in New York City to concentrate on a more important work-in-progress. Son Jackson, their first child, was born last August 4. “That was the production for 2009,” says Necrason. “And it was a big one!”

This weekend, the troupe returns to Knight Point with five performances of Much Ado About Nothing. Nagle directs the show; Necrason choreographs. The romantic comedy marks a shift away from the Bard’s broader comedic fare. “For our first three seasons, we chose his most popular, well-known comedies,” Necrason says. “They are just naturally accessible to an audience,” including young people. The goal was to get as many people as possible “interested and on board for Shakespeare,” she adds.

Like all three plays VSC has previously produced, Much Ado lends itself well to outdoor staging with an ensemble cast, Necrason explains. The setting is sunny Italy, and many scenes take place outside. The play’s “airy estate feel” also offers the opportunity to follow a visual aesthetic that differs from the “bright, bold style” of recent VSC shows, she observes.

“We wanted to choose something that was a little more romantic, more poetic,” Necrason says, “where we could sort of pare it down and simplify ... And use the natural environment of the stage area at the park a little bit more organically.”

Much Ado also represents a thematic transition. “Even though it’s a comedy,” says Necrason, “it’s also a complex love story, a mature love story.” The saga of young fiancés Hero and Claudio ostensibly drives the plot. But Shakespeare really sharpens his quill for the barbed battle between confirmed bachelorette Beatrice and even more firmly committed to bachelorhood Benedick. They hate each other at first sight. So their meddlesome friends concoct a mean scheme: Make ’em fall in love!

“Man versus woman, the eternal battle of the sexes — everybody can relate to it,” Necrason declares. In the VSC production, spouses Jenny and Eric Sheffer Stevens portray Beatrice and Benedick. With a married couple as the skirmishing sweethearts, “you’ve got that added edge of their personal relationship,” Necrason says. “It can’t help but feed the chemistry of their character relationship.”

This summer also marks further growth in the company’s commitment to community outreach. A new internship program “aims to give young people exposure to professional theater by working directly with seasoned artists,” Necrason says. Three young Vermont actors are participating in all aspects of production, design and rehearsal during VSC’s 10-day island stay, in addition to getting acting workshops with company members.

The VSC is embracing another new neighborhood connection: community service performed through Grand Isle County’s Court Diversion program. Alburgh’s Joanne Necrason — Jena’s mom — is coordinating the work of three helpers. “Having them on site has been such a gift,” Joanne says. “They’ve truly become ad hoc members of the company.”

Much Ado About Nothing, directed by John Nagle and produced by Vermont Shakespeare Company. Knight Point State Park, North Hero. August 12-15, Thursday through Sunday at 6 p.m. and Saturday at 2 p.m. $20; free admission for kids under 12. vermontshakespeare.org